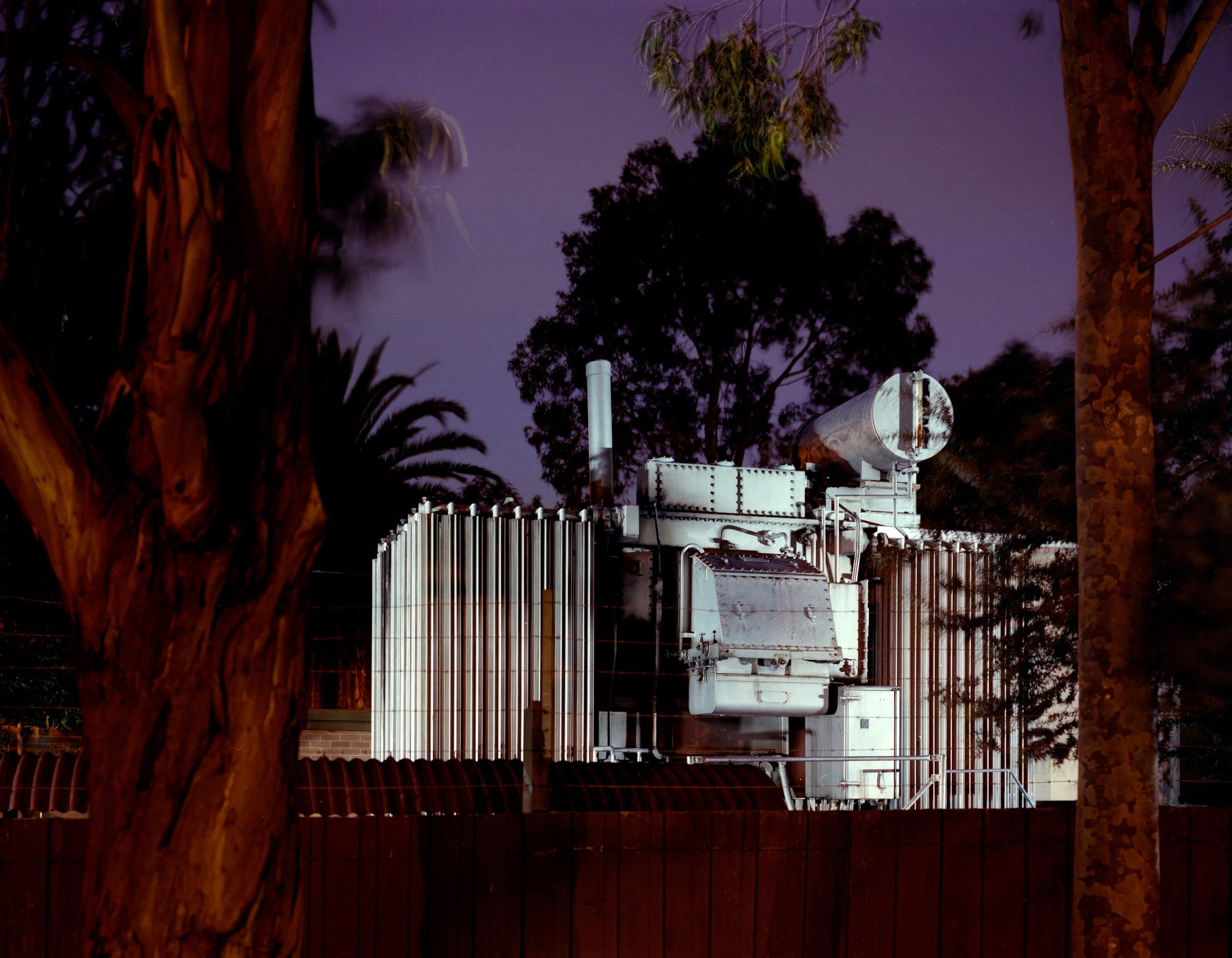 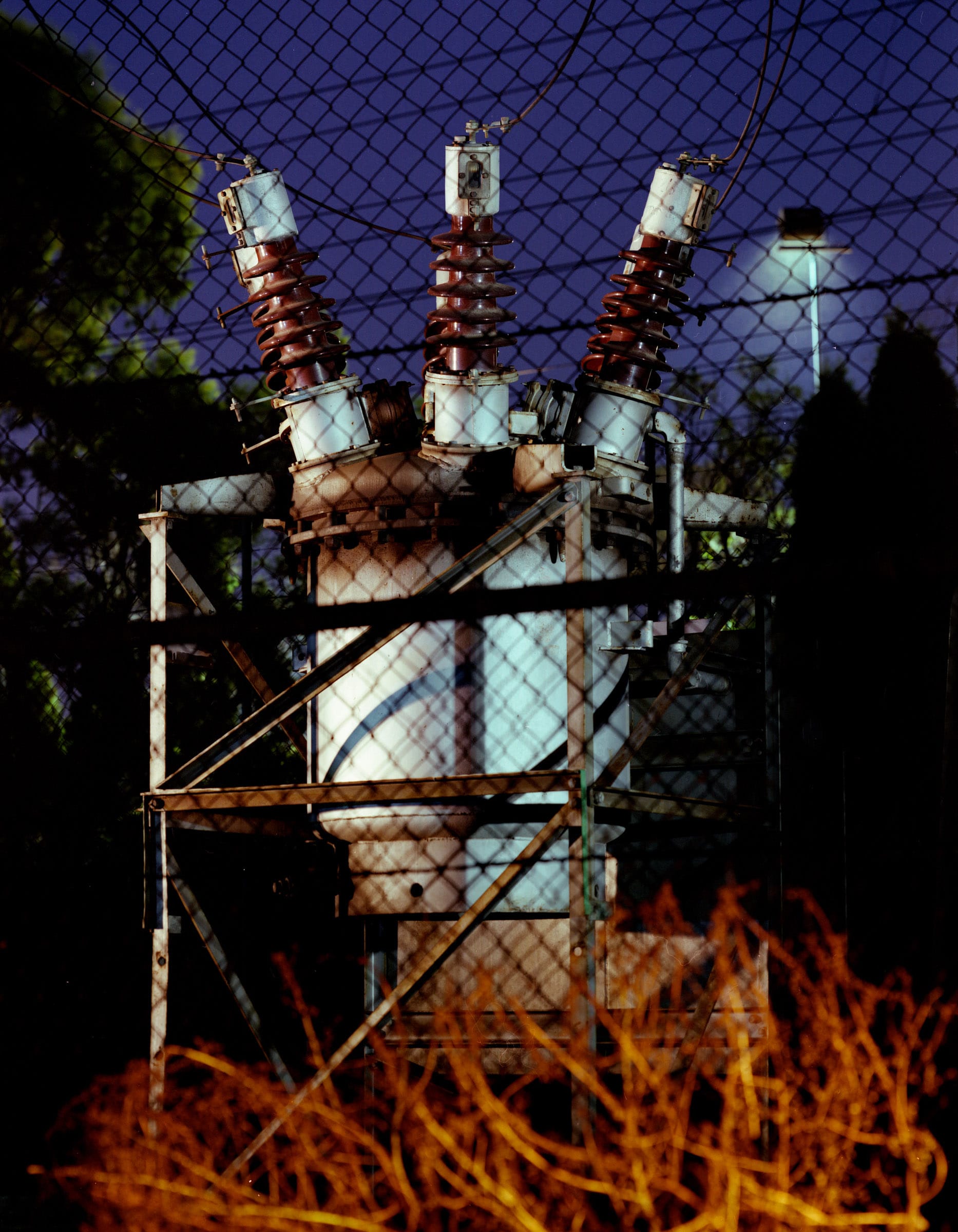 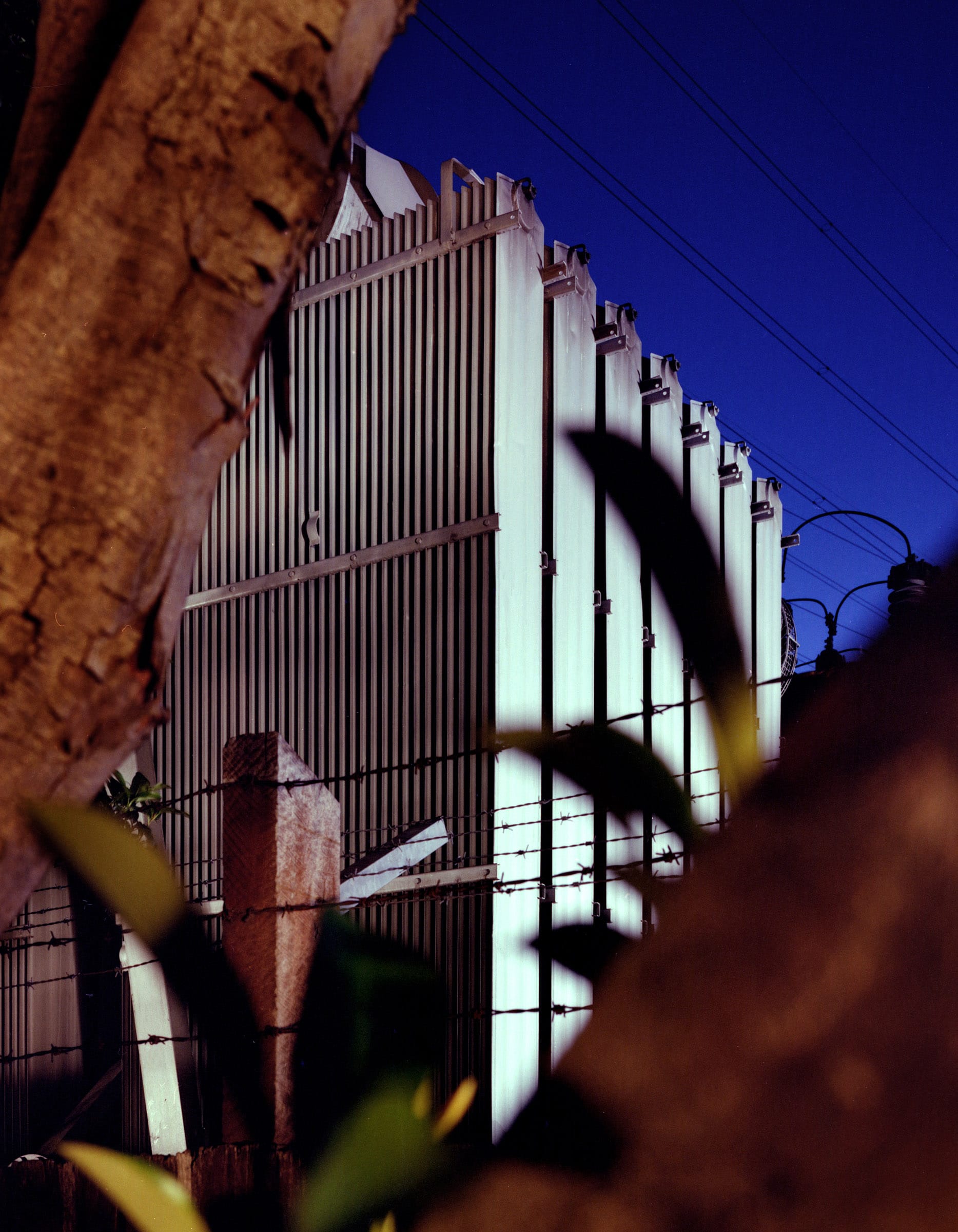 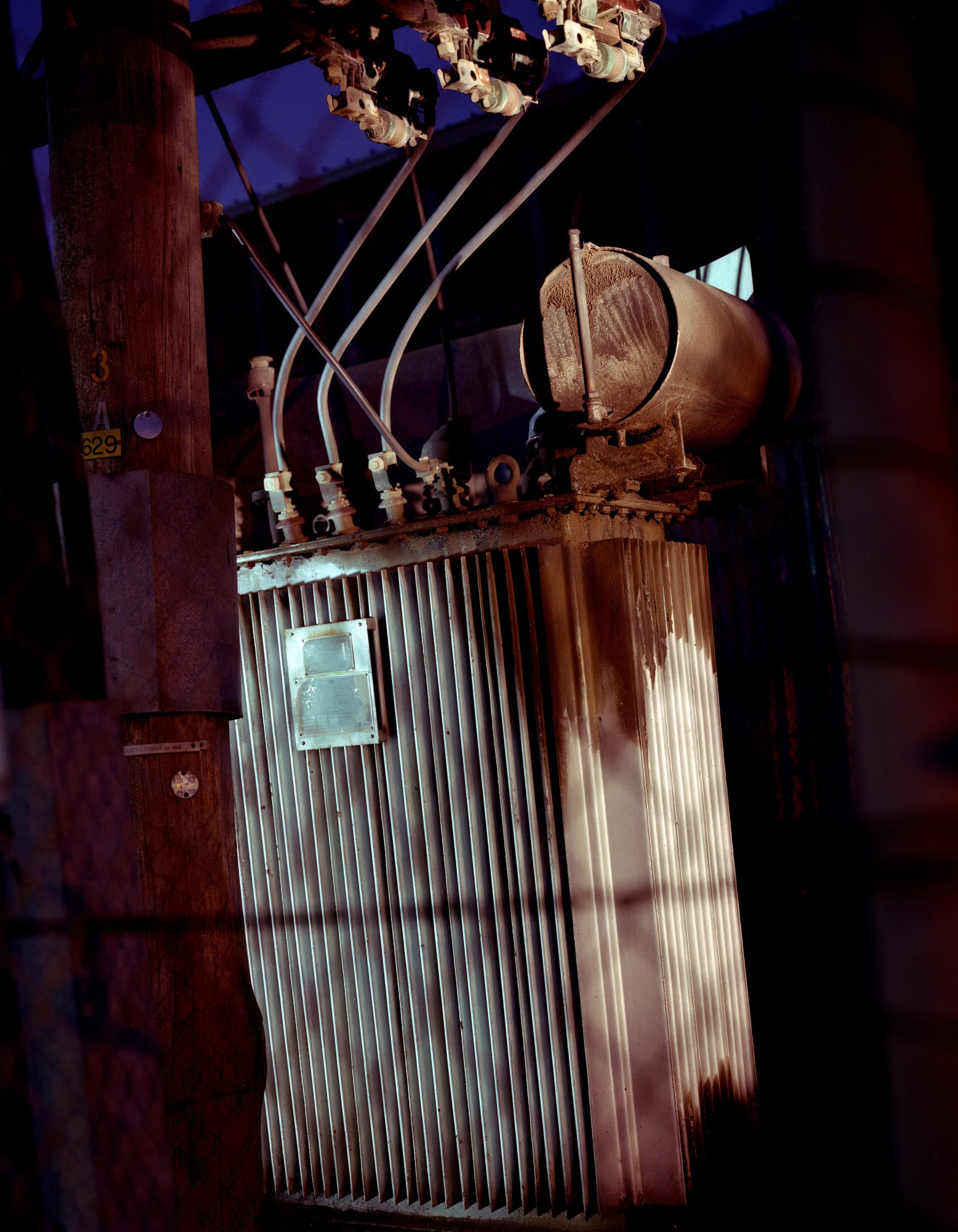 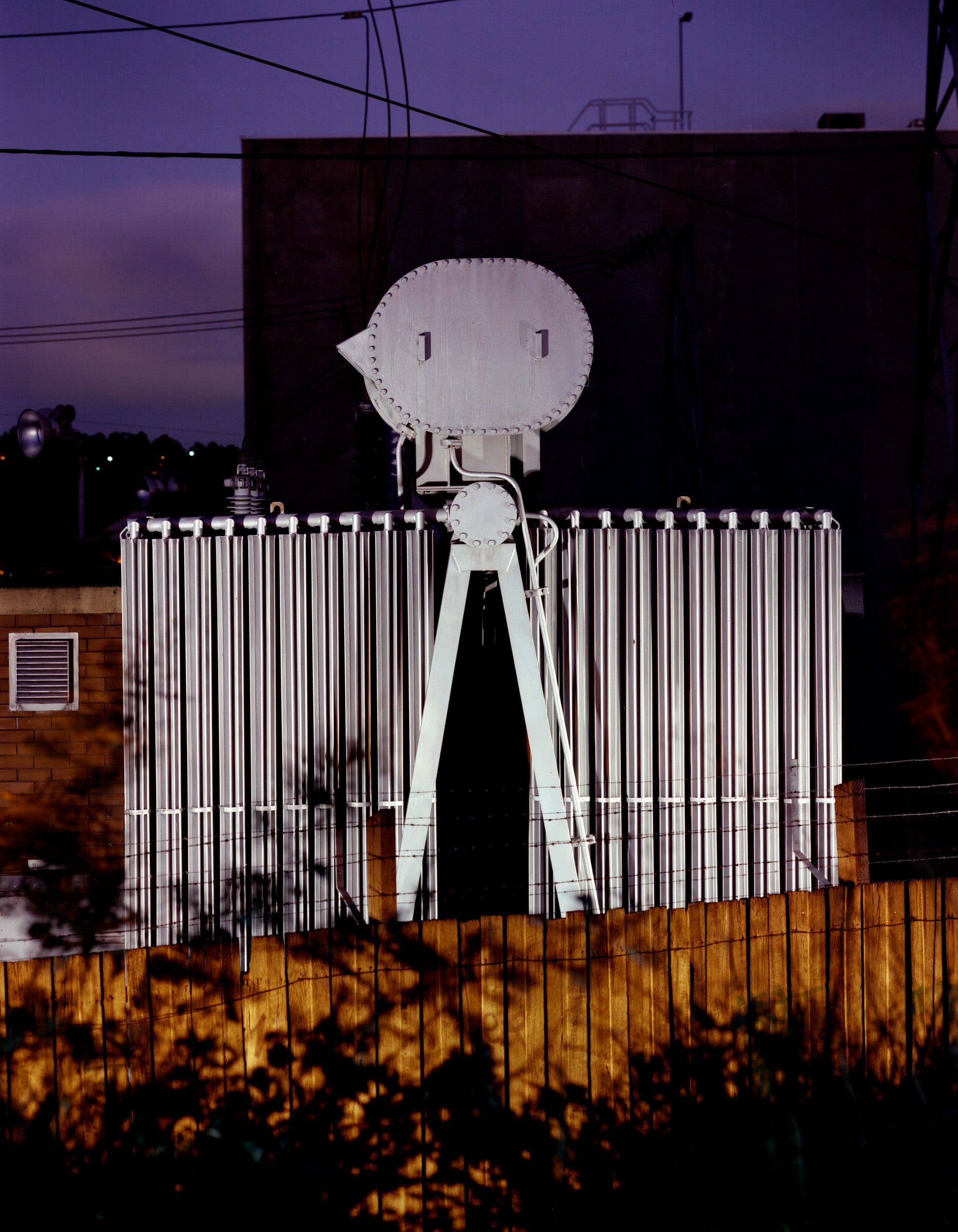 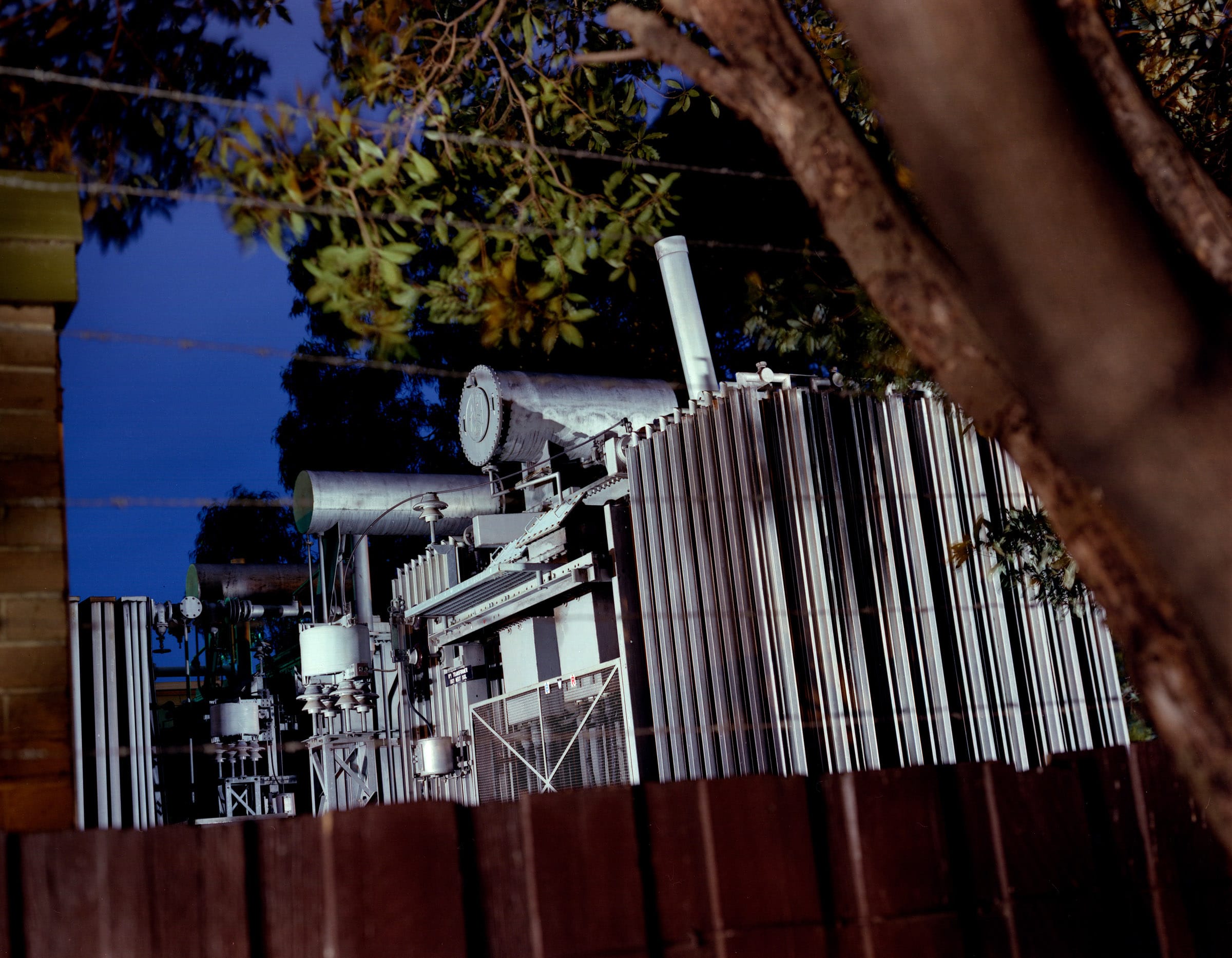 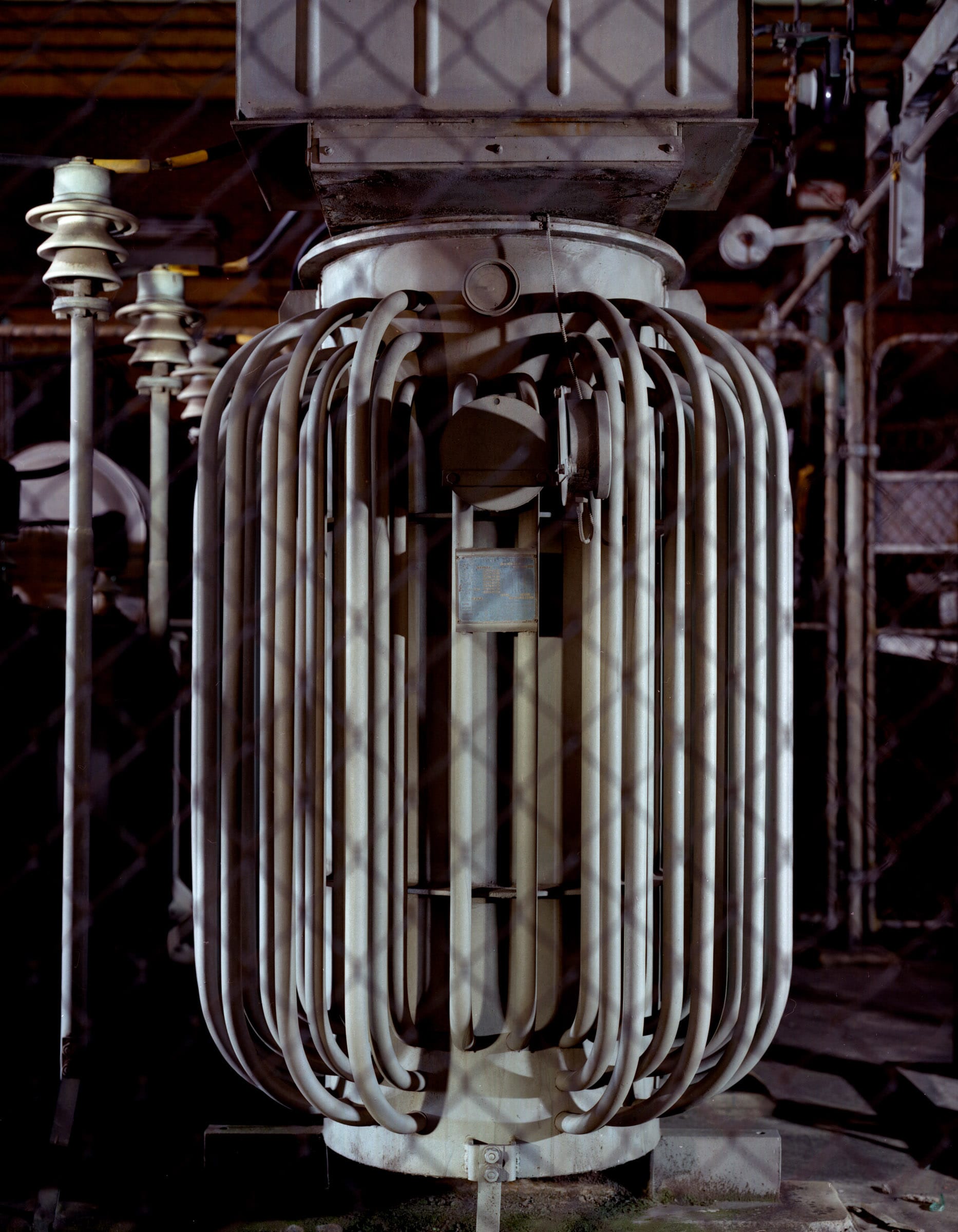 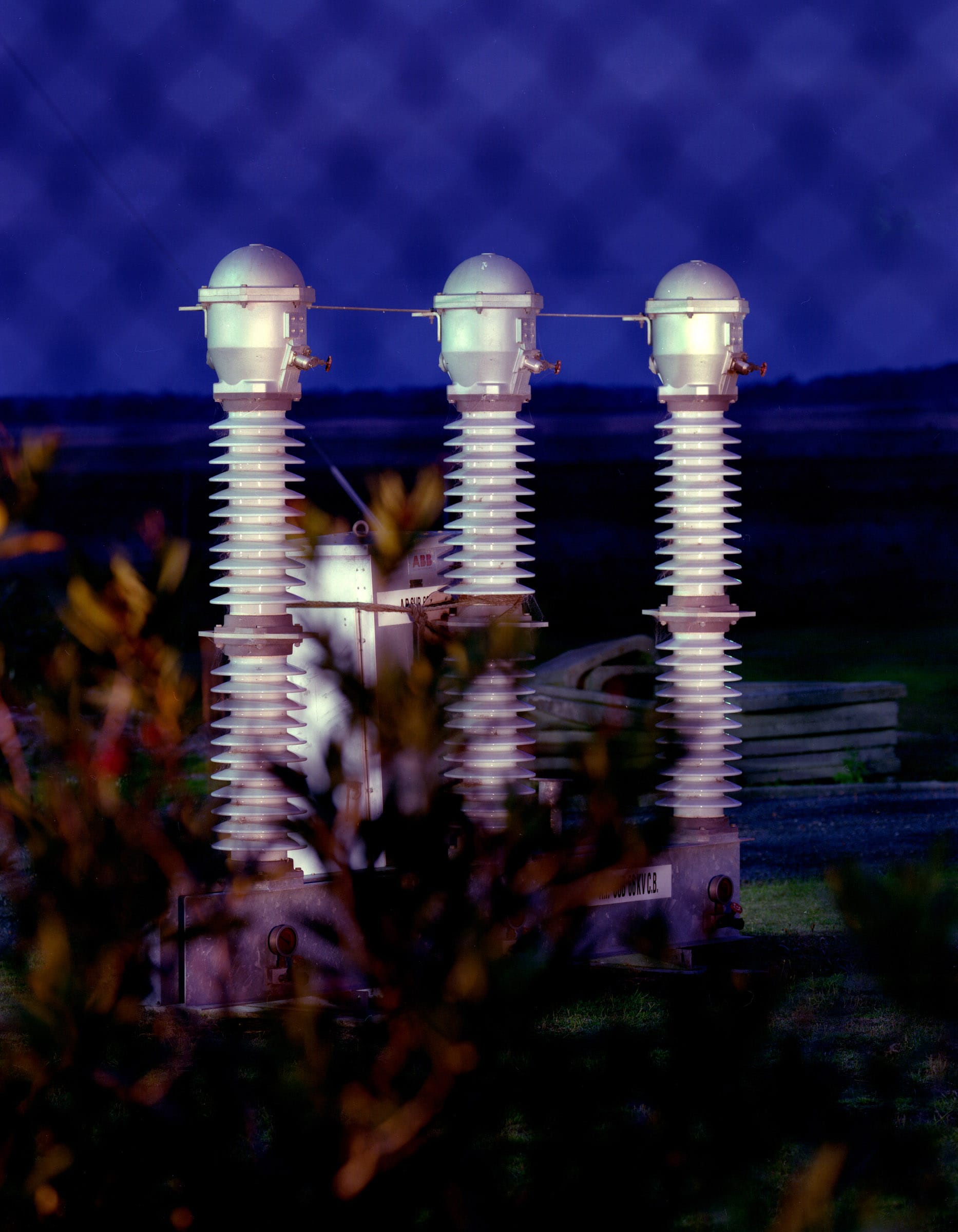 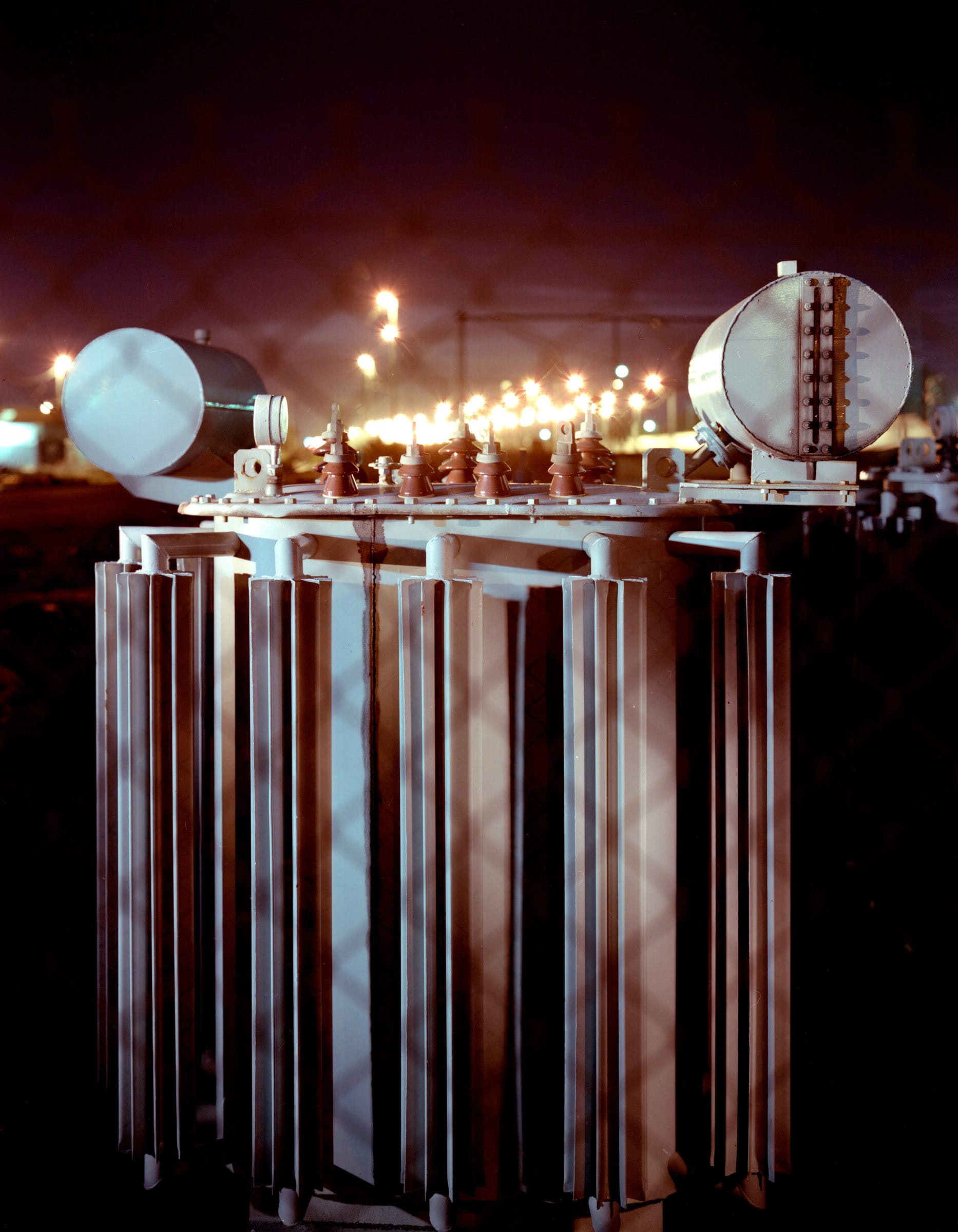 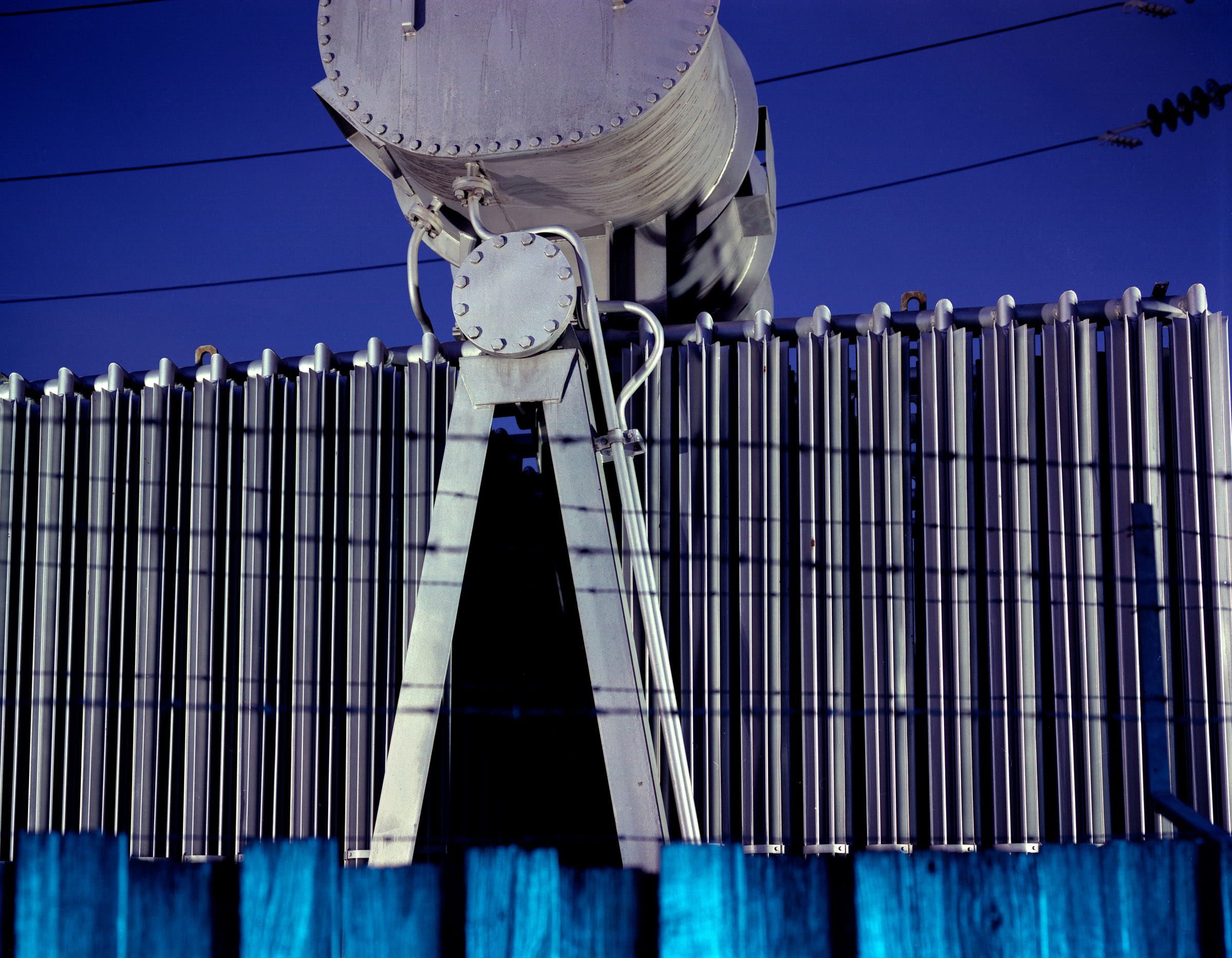 Who ever notices electricity substations? Out of the seeming infinity of machines and technical gadgets that maintain our artificial environment, they are surely among the least noticed and least promising as subject matter for art. Dotted around the suburbs to maintain supply to our light switches and power points, they either blend in to the point of invisibility, or scar their surroundings with that brutishness common to ugly but necessary structures.

Andrew Curtis’ exhibition Volt embraces these objects and depicts them as strange and wonderful sculptures, mechanical assemblages that have, in his pictures at least, a unique power and beauty.

The photography of industrial machines as carriers of meaning has a long history. In the 1930s the American photojournalist Margaret Bourke-White celebrated Industry as an epic struggle – giant machine presses and ant-like workers, great cauldrons of molten steel. The brute scale and grandeur was indeed propaganda, but not just for capitalism or communism. It was for the ideology of Industrialisation.

Our own Wolfgang Sievers, a great poet of technology, focused his camera on the vast scale of Australia’s industrial projects but included the men who created them. His photographs closed in on that point of contact between the machine and the individual worker, skilled technicians harnessing mechanical forces. In a Sievers photograph a machine, no matter its size, is a tool.

More recently the German couple Bernd and Hilla Becher have created a vast photographic catalogue of industrial structures, water towers, mine heads, and factory facades, a typology of industrial architecture. Their beautiful black and white prints, shot with a cool unrhetorical gaze, denote the passing of the industrial era.

Seen in this context there is clearly an issue in making photographs of industrial subjects at the very end of the industrial century. Throughout the West there is a shift away from manufacturing and heavy industry, toward the service economies of tourism and banking etc. What is left behind of the old regime is often the ghostly traces, derelict factories, rusting machinery. In this aftermath, a certain nostalgia can creep in;  the apparatus of the industrial age acquires a romance, a mystique: the machines take on a patina, the buildings appear picturesque, like roman ruins. Many of Andrew Curtis’ earlier images convey this.

One of the most singular realisations of this emptied-out world is David Lynch’s film Eraserhead, a disturbing dream of a collapsed industrial landscape peopled by disoriented survivors. One of the auteurs of recent surreal cinema, Lynch, through this and later works including Elephant Man and Lost Highway, has been a distinct and acknowledged inspiration to Curtis in his development of an appropriate and workable style. The darkness and dread, the wry humour, and most of all the industrial subject matter, all filtered into a developing sensibility.

After more than a decade of work on several related projects, it is possible to identify the characteristics of a Curtis style:

a romantic vision of imagination and drama, using an aesthetic of staged lighting and conspicuous colour and tonal contrasts;

machine forms seen as artifacts of a passing industrial era, or as modernist sculptures, or as totemic figures of magical and symbolic power;

subjects imbued with dense cultural references and homages, taken from his wide acquaintance with pop culture, cinema, design and art.

These qualities have been present throughout his photographic career. In an early project, the Pivot series of 1987, for example, a factory is presented as a stage-like setting for a Piranesi  nightmare. Ominous chambers are lit  to emphasise darkness and to render scale ambiguous. The shadows are eerie and dense, somehow more present than the light.

In the subsequent ESP Machinery series in 1988, refurbished factory machines were photographed formally, like portraits. These weird objects, purely functional in the cold light of day, were transformed into strange anthropomorphic figures, some of them human-like (a Kendo swordsman), some of them  abstract (a modernist sculpture), together making up a gallery of surreal industrial readymades.

In his latest work, Volt, we can see Curtis’ further development of this theme of industrial artifacts and their appeal to the imagination. A feature of these images is the degree of imaginative ambiguity the machines have acquired. Shooting on location at night with a complex lighting system, Curtis has teased out of this unlikely subject matter a potent hallucinatory vision.

Hawthorn 1, for example, shows an electrical transformer lit with a combination of warm and cool colours, the foreground grass appearing like fire. The machine itself is an impressive totemic design, resembling a native head dress, or what used to be called ‘primitive sculpture’. Perhaps its truer resemblance, though, is to science fiction because this machine looks like an alien robot from a fifties B-grade space movie.

Deepdene 2 is a strange encounter between the suburban and the mythological. A bizarre shape rising from behind a wooden fence, it could be, depending on how you perceive it, a movie camera mounted on a tripod, or an invading alien from The War of the Worlds, or perhaps some giant metallic angel displaying its magnificent raiment from its outstretched arms.

A more cerebral work, Glen Iris 1, shows what looks like a white skyscraper glimpsed between the branches of a tree. The strict geometric grid of this substation’s cooling panels resembles the severe architectural forms of office towers. In a neat summary of modernist design theory it recalls how architectural form was expected to follow engineered function – a building‘s design should express its structure. Some modernist skyscrapers, like the Chrysler building, were metaphors of technology itself. In this new unity of art and technology, a skyscraper might have every reason to look like, for example, an electricity substation (many of the real ones do!)

Andrew Curtis’ exhibition Volt is a sophisticated and playful exploration of our technological culture. His long attention to the artifacts of our industrial economy and his wide acquaintance with the history and style of visual art enable him to reveal his uniquely offbeat vision of a world we hardly knew was there. 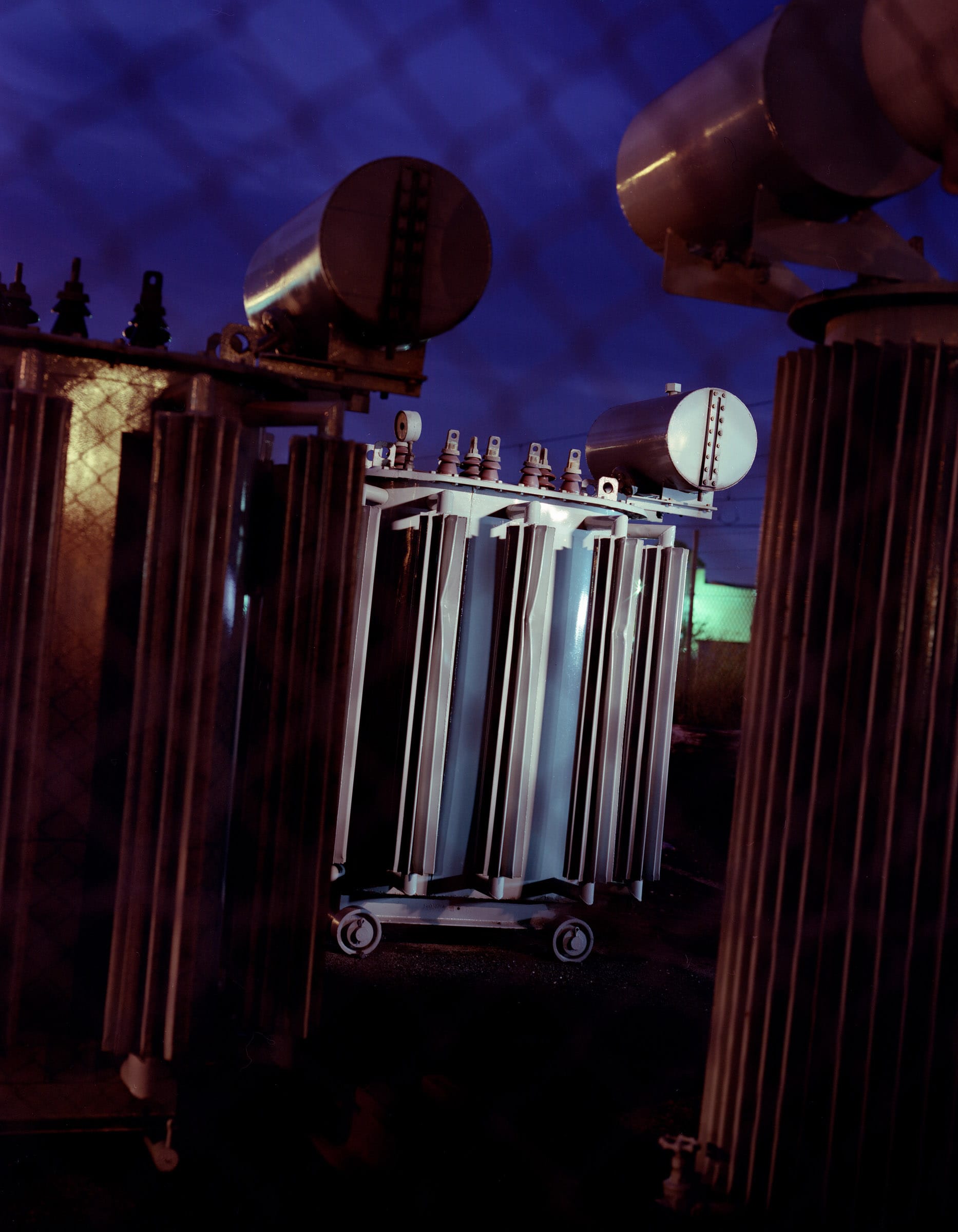 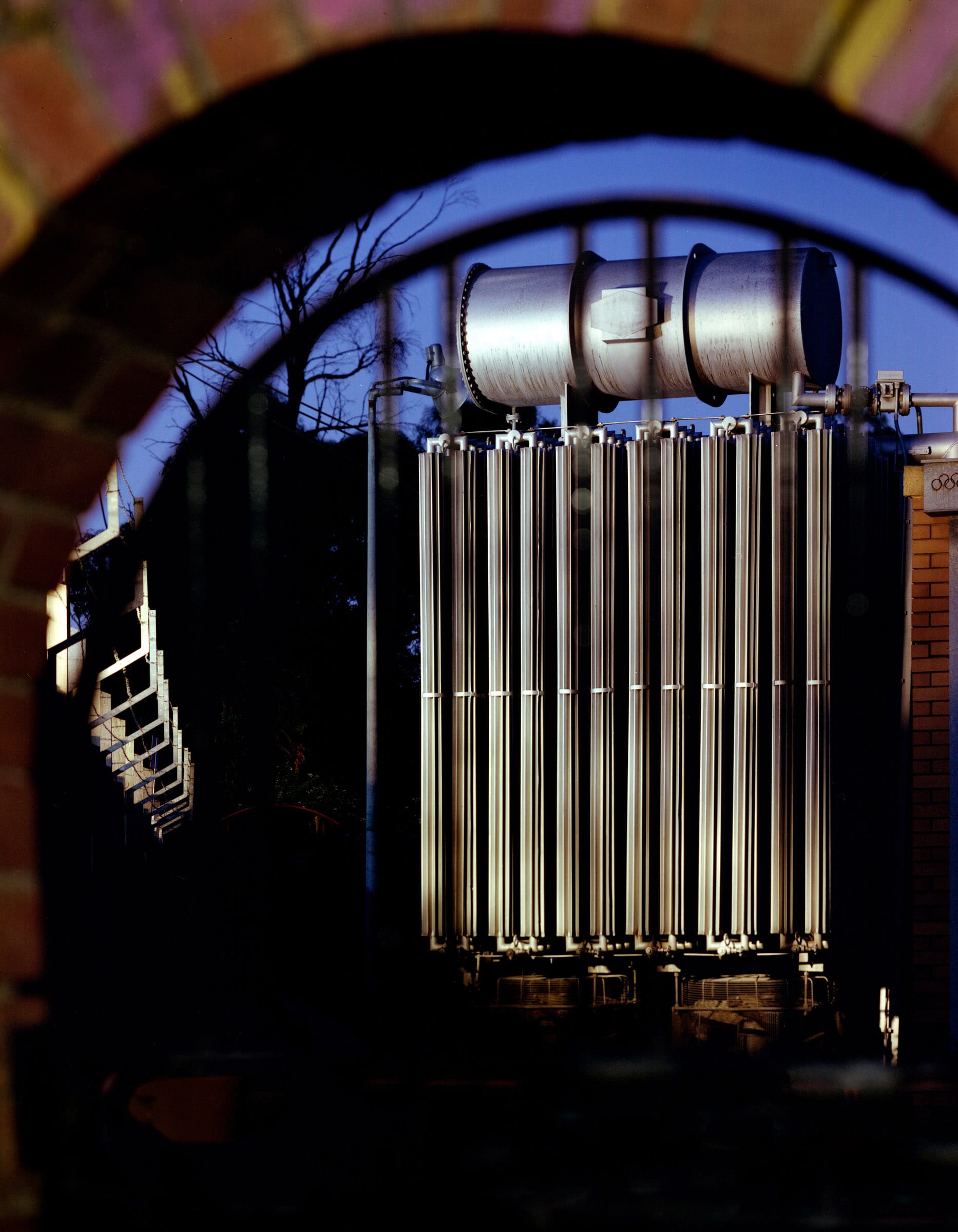 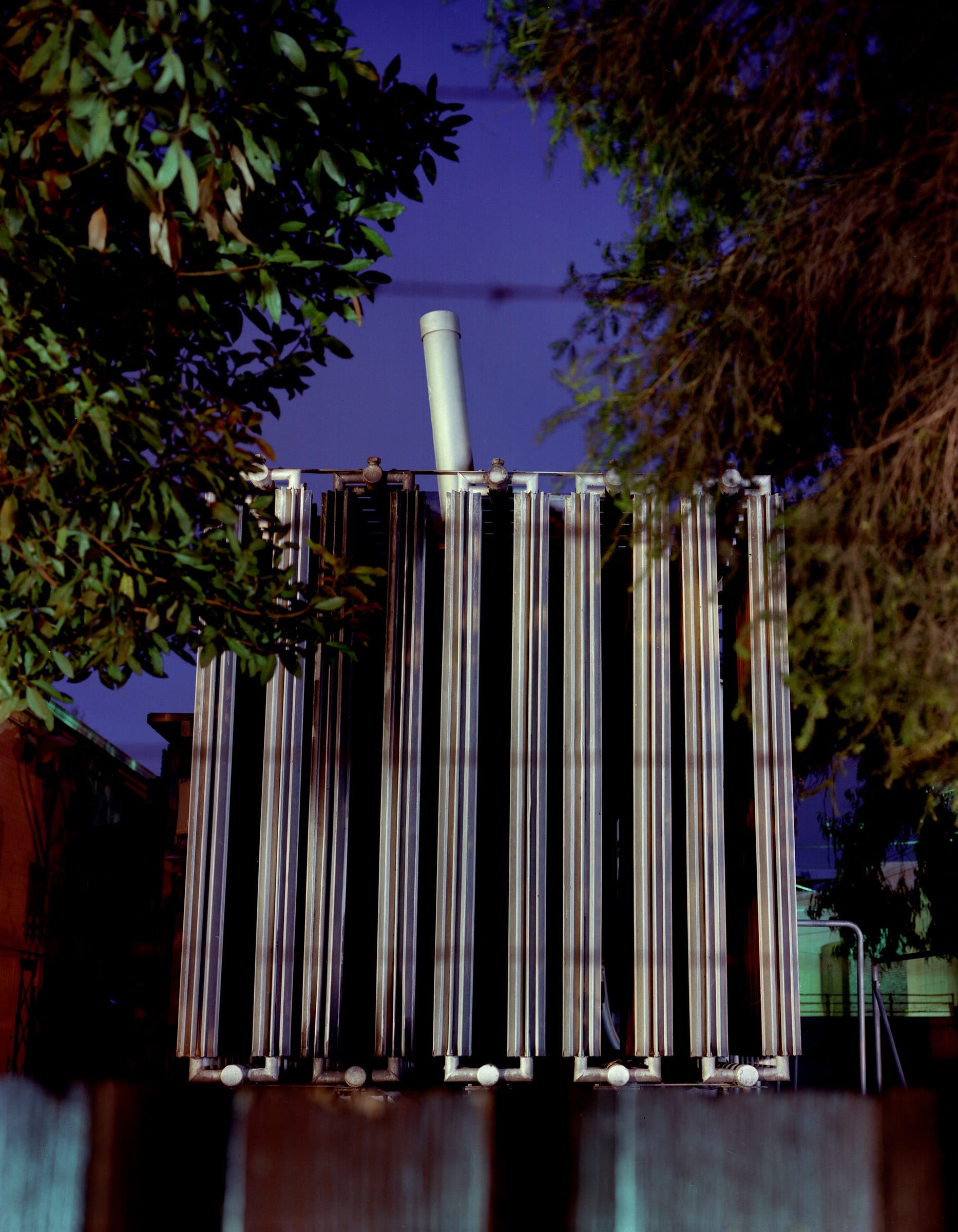 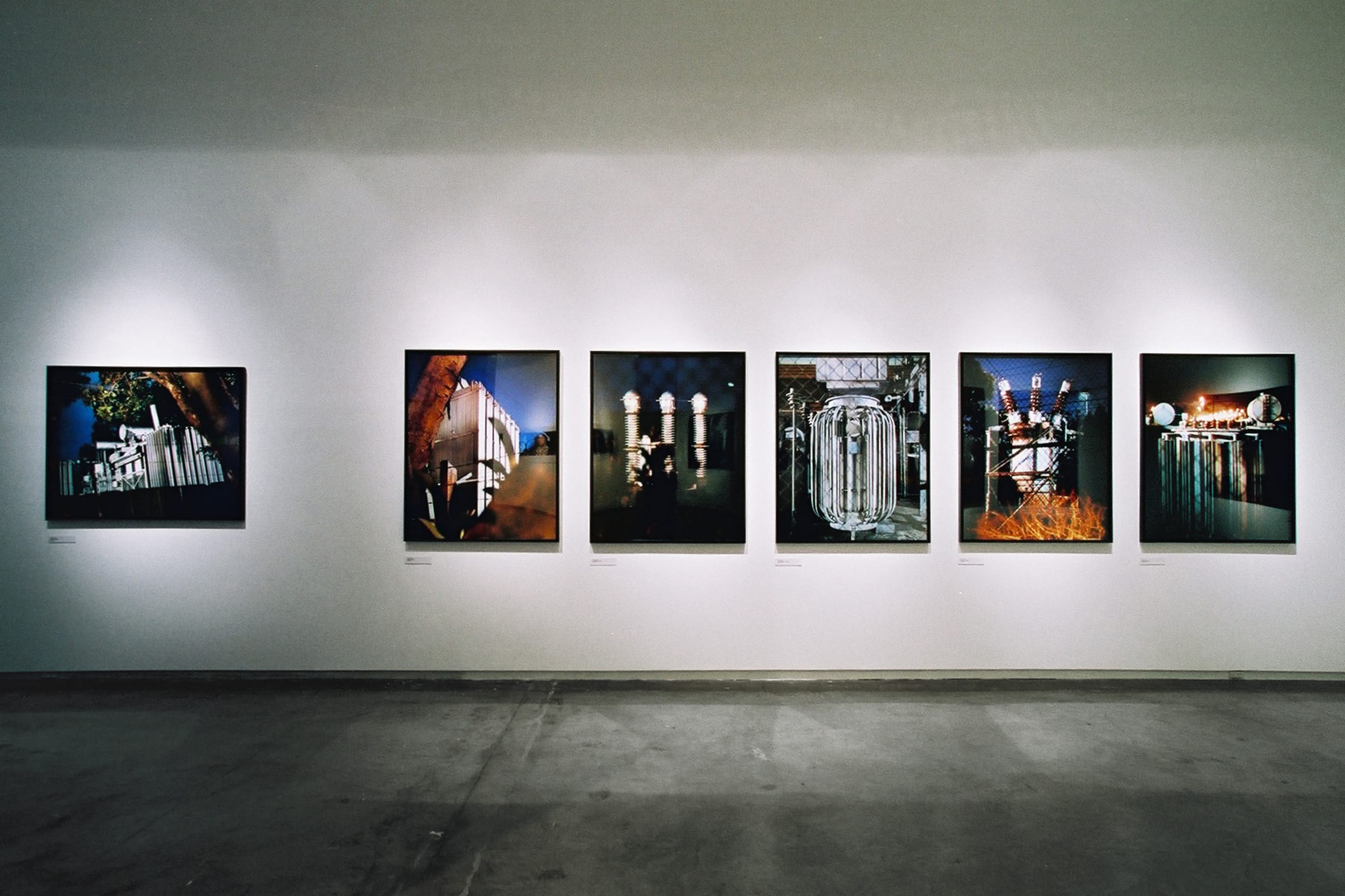 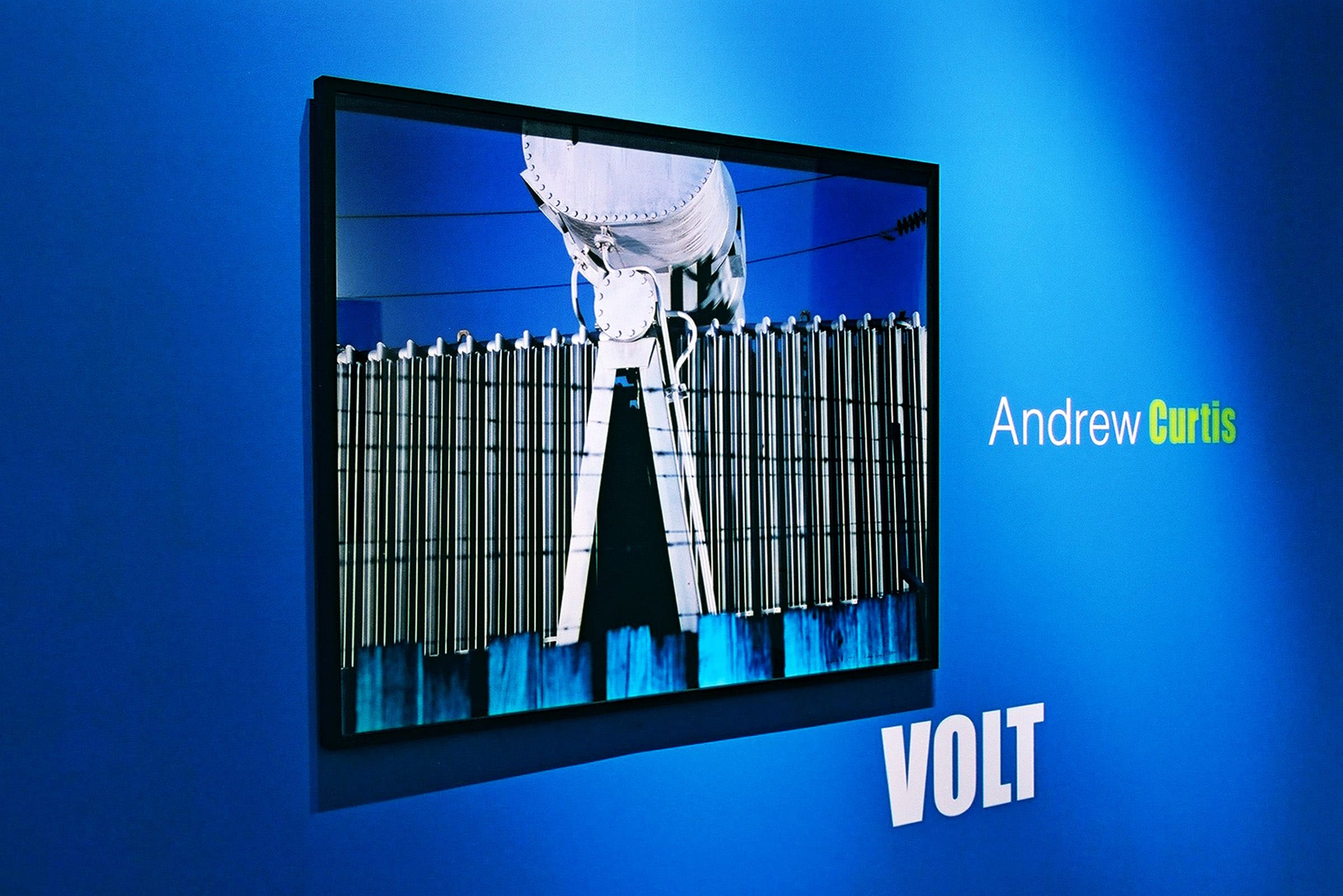