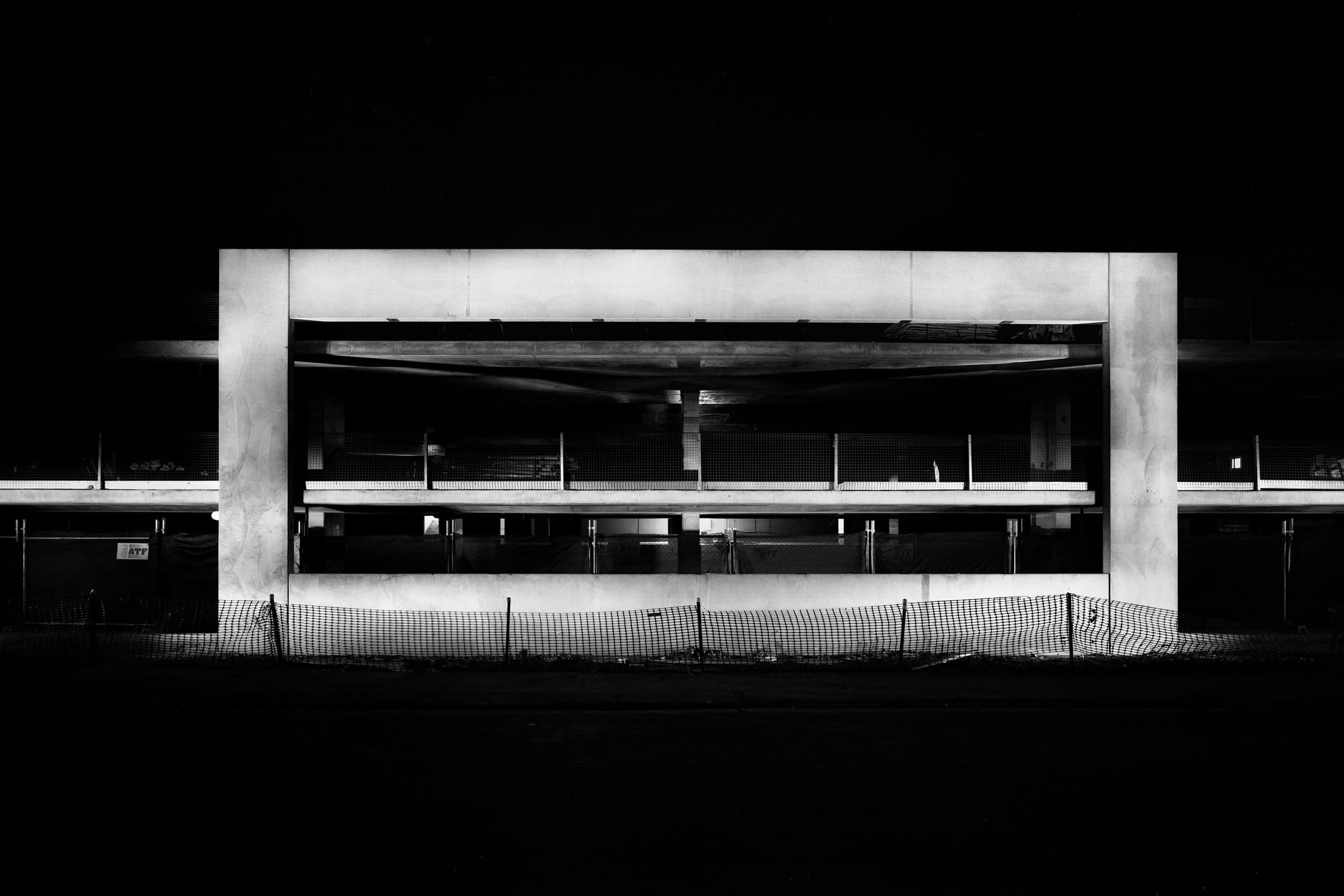 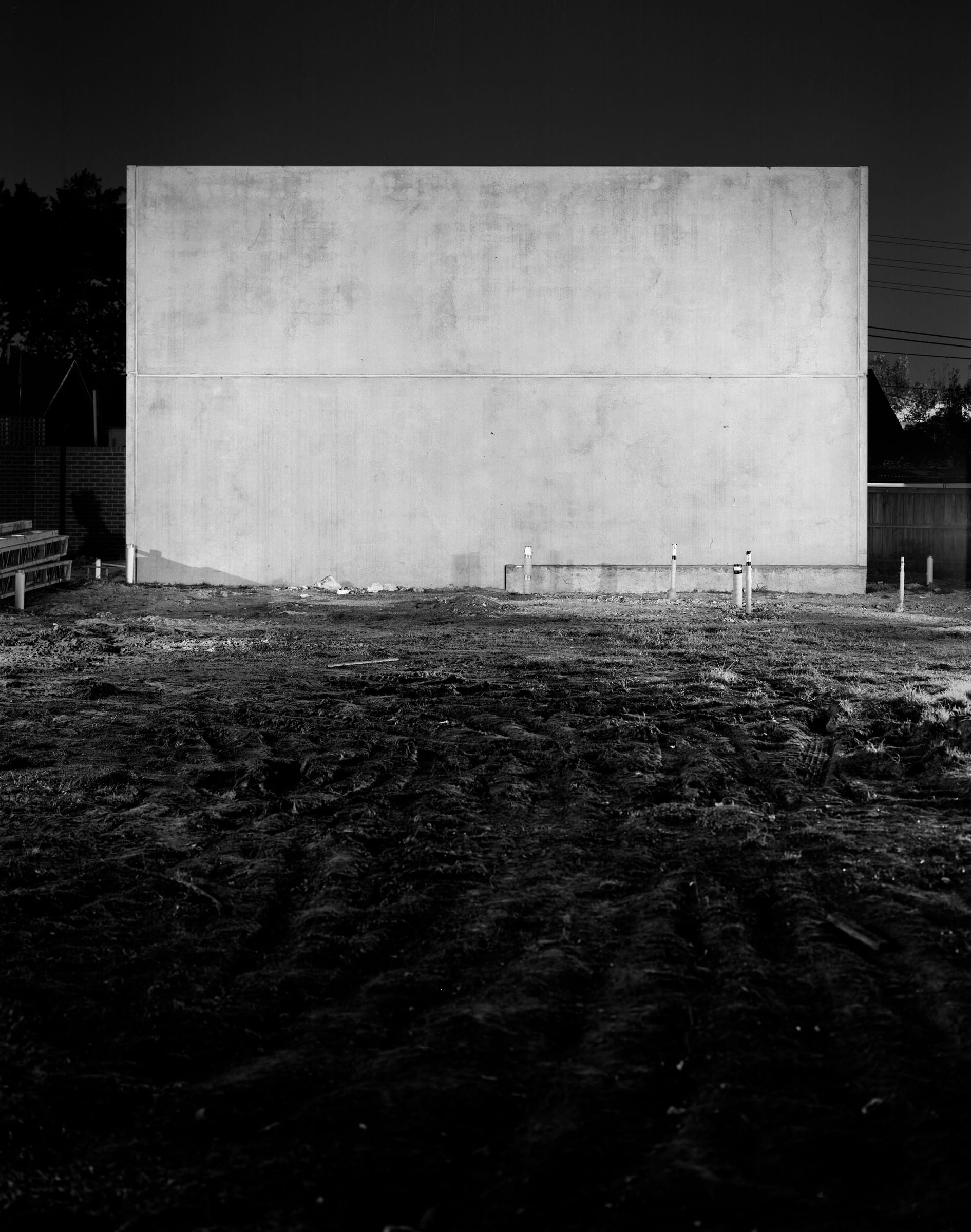 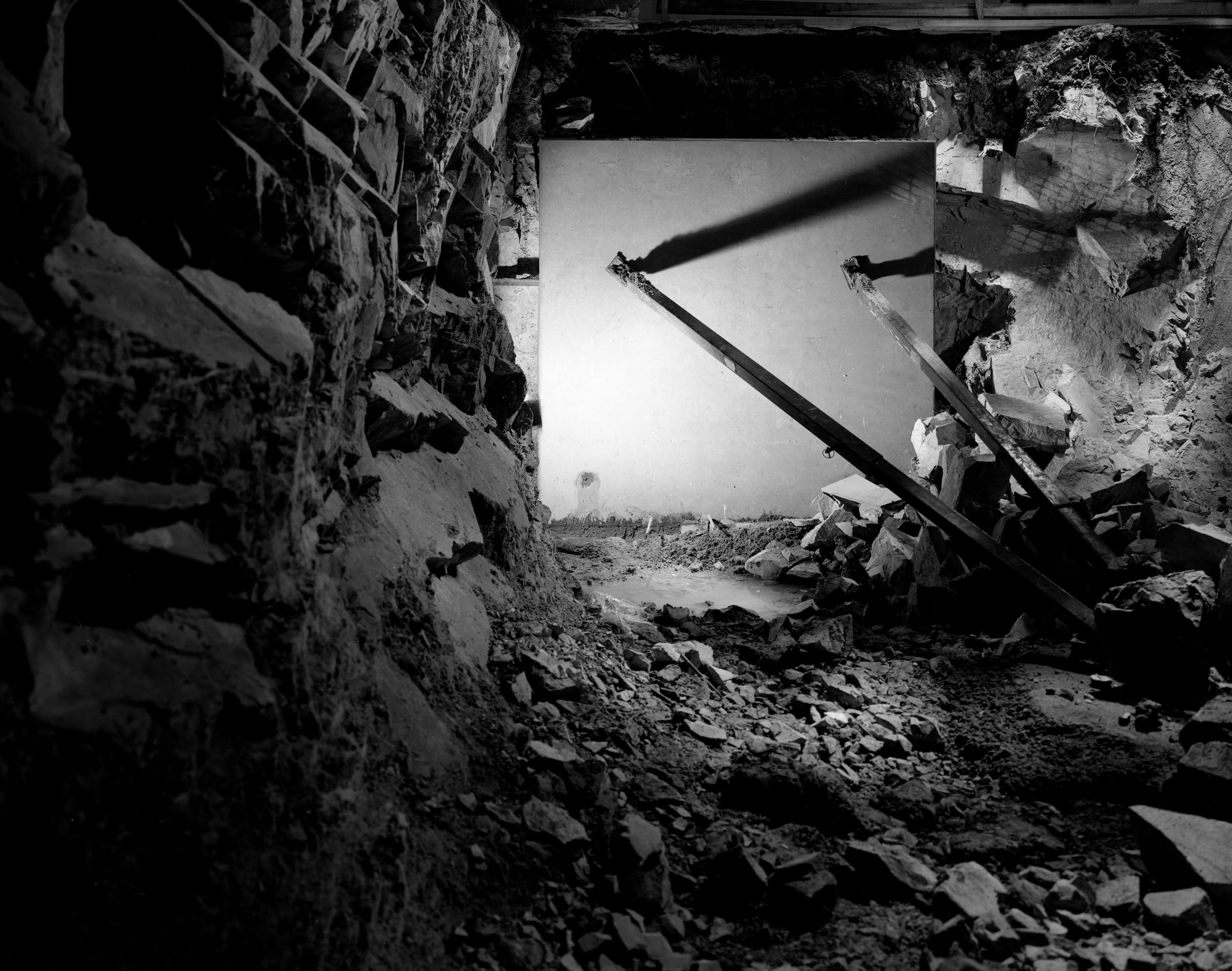 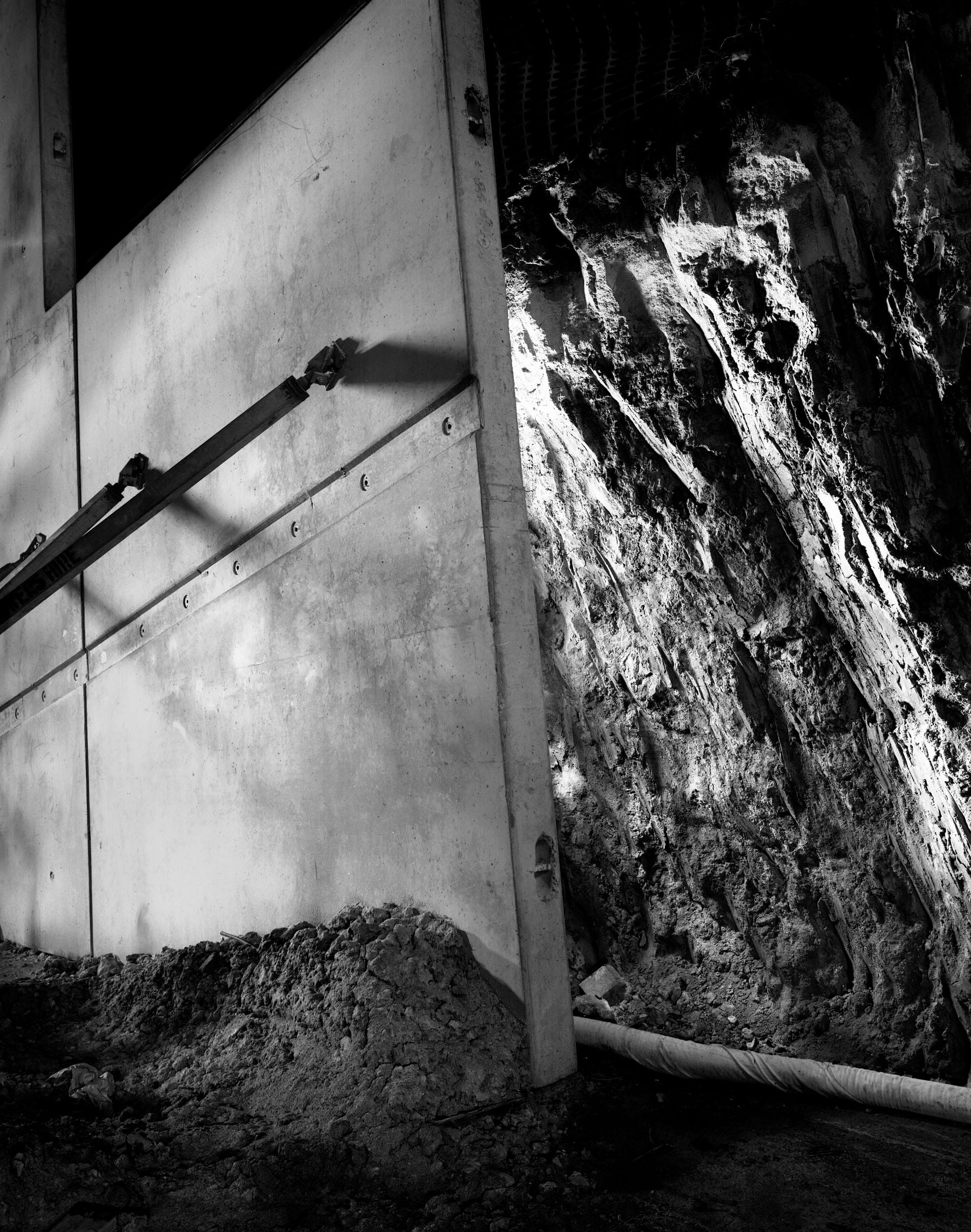 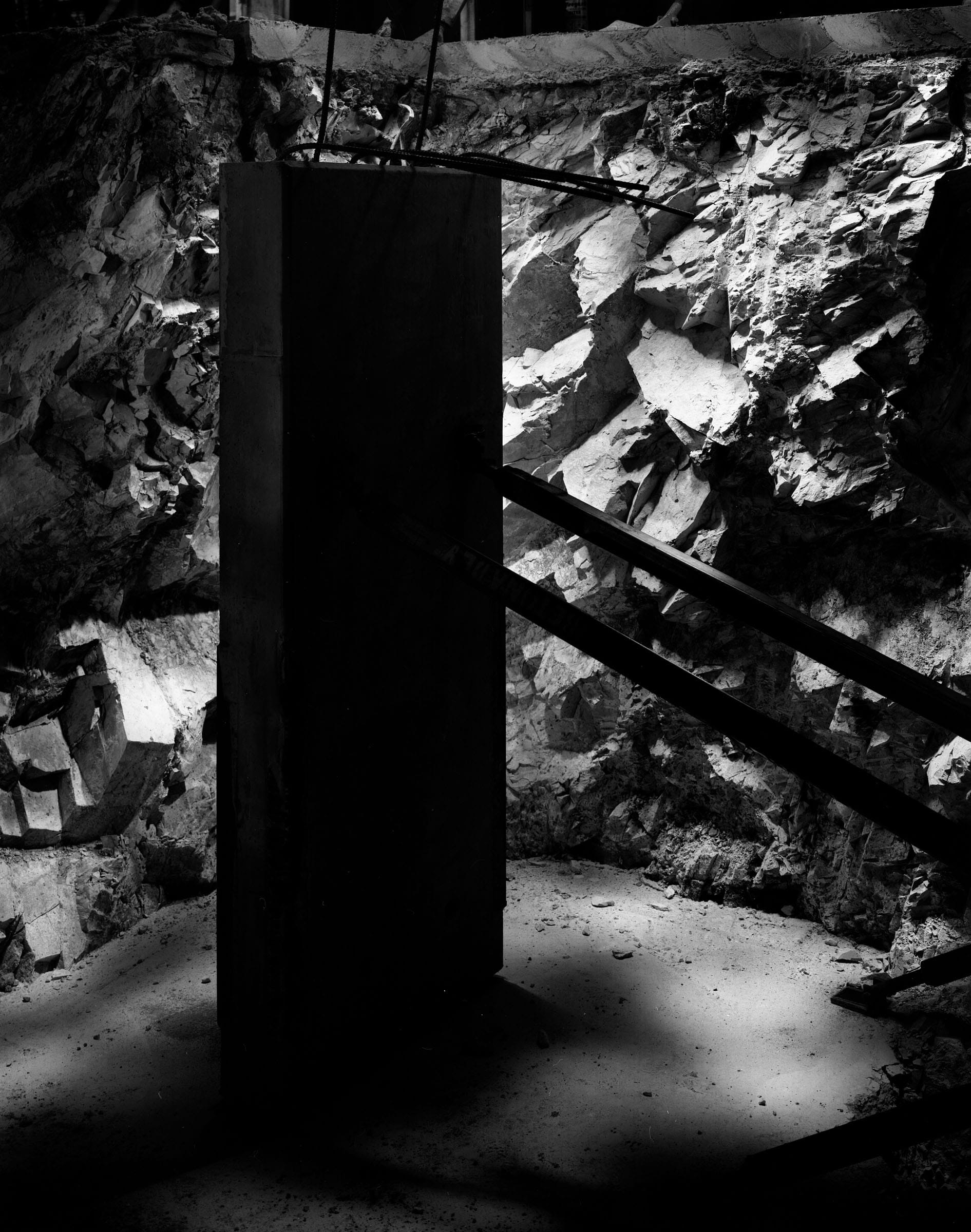 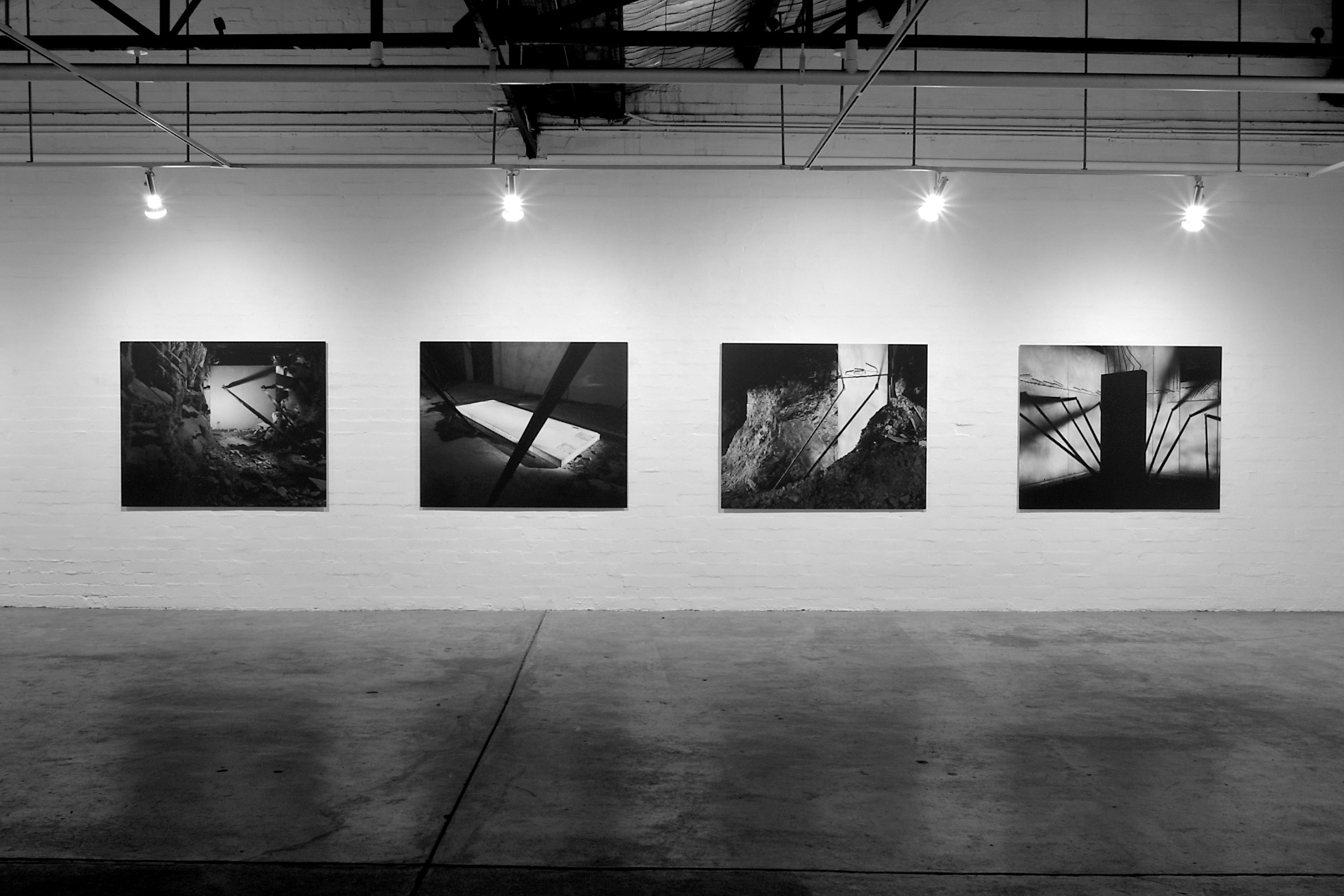 A MAN’S WORLD
Museum of Brisbane

A sense of fragility can be seen in works such as those by Andrew Curtis, who lights and shoots various construction components at night. In Triholm Avenue, a typical slab takes on almost religious proportions, its inner light seeping across the ground it rests on. In Toorak Road 2, he lights a monolith-like shape from behind, the masculine-like figure now independent, yet hidden within shadow. To Curtis, the site of construction is a definitive representation of masculine thought and creation. The sharp, clean lines dictate no nonsense, straight to the point imaginations.

A construction site, in Curtis’ mind at least, is a place of both rigid practice and a surprising element of expression. 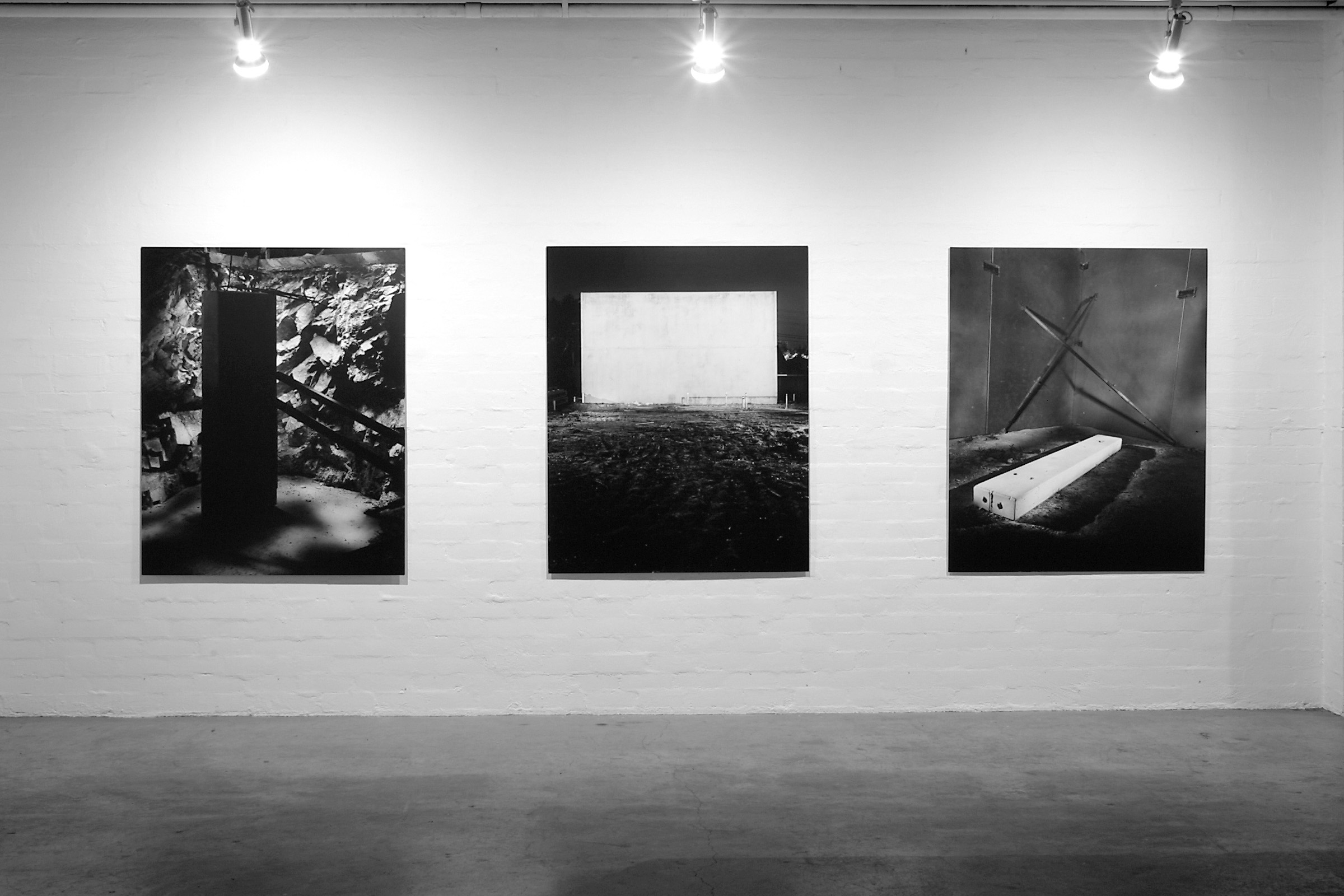 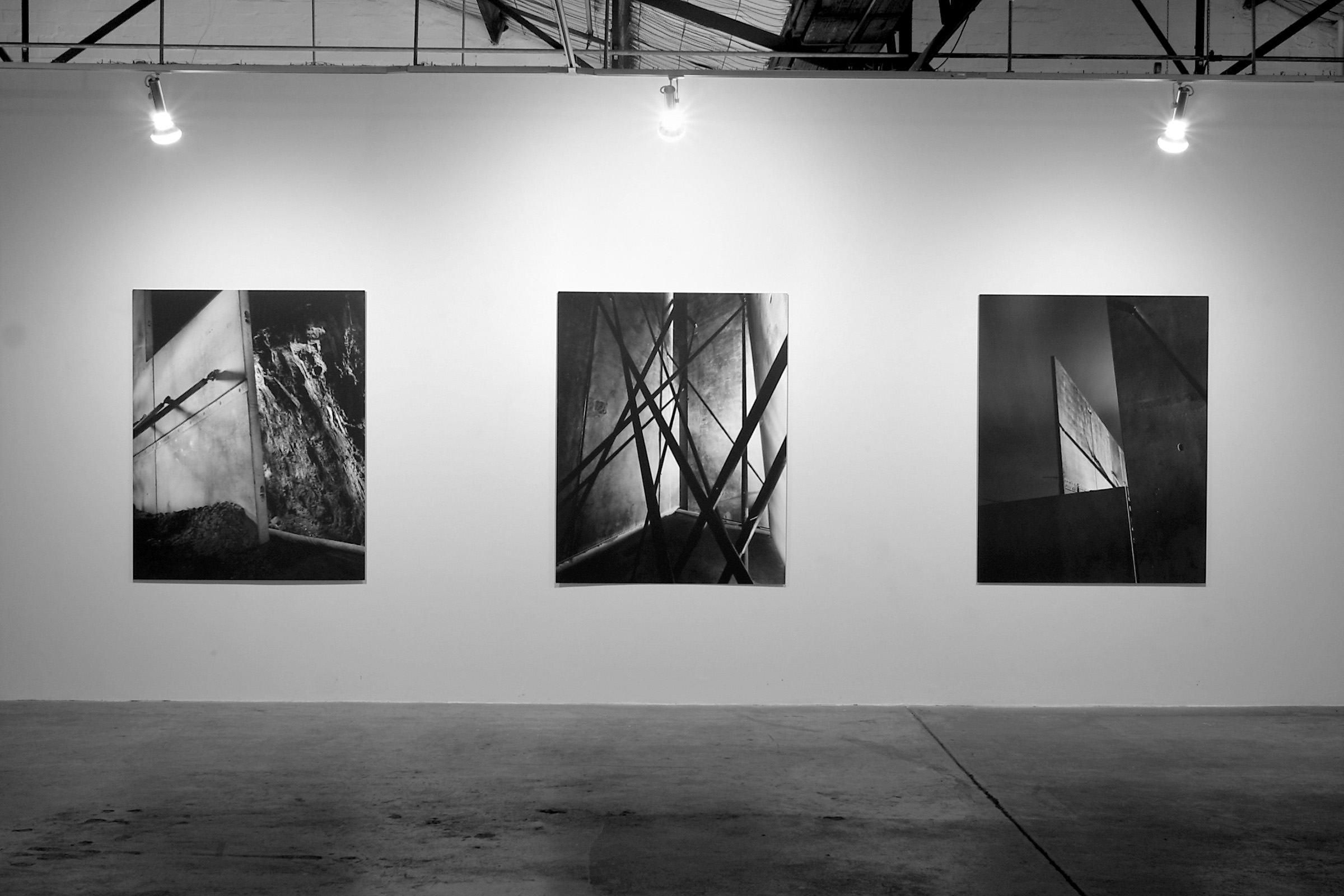 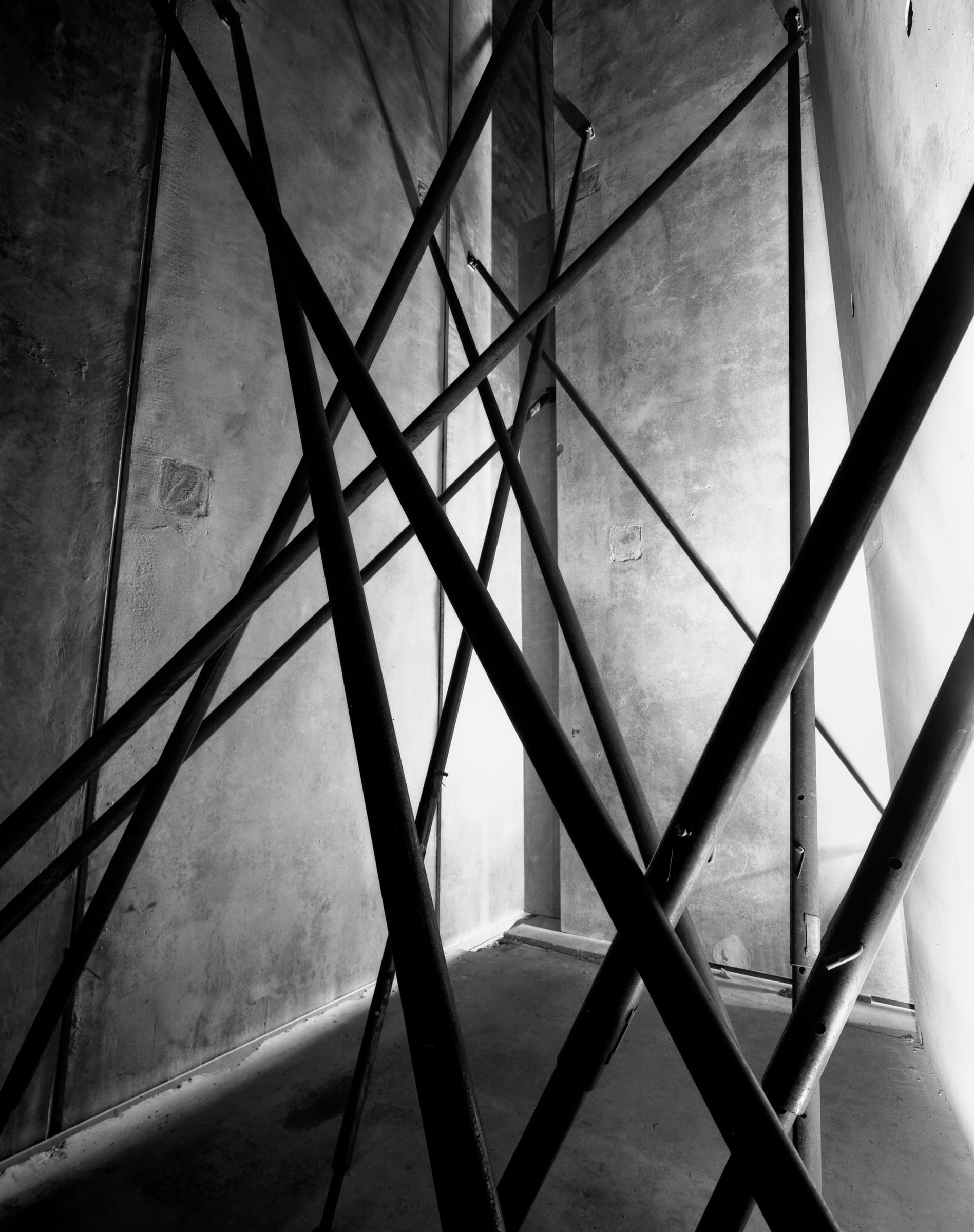 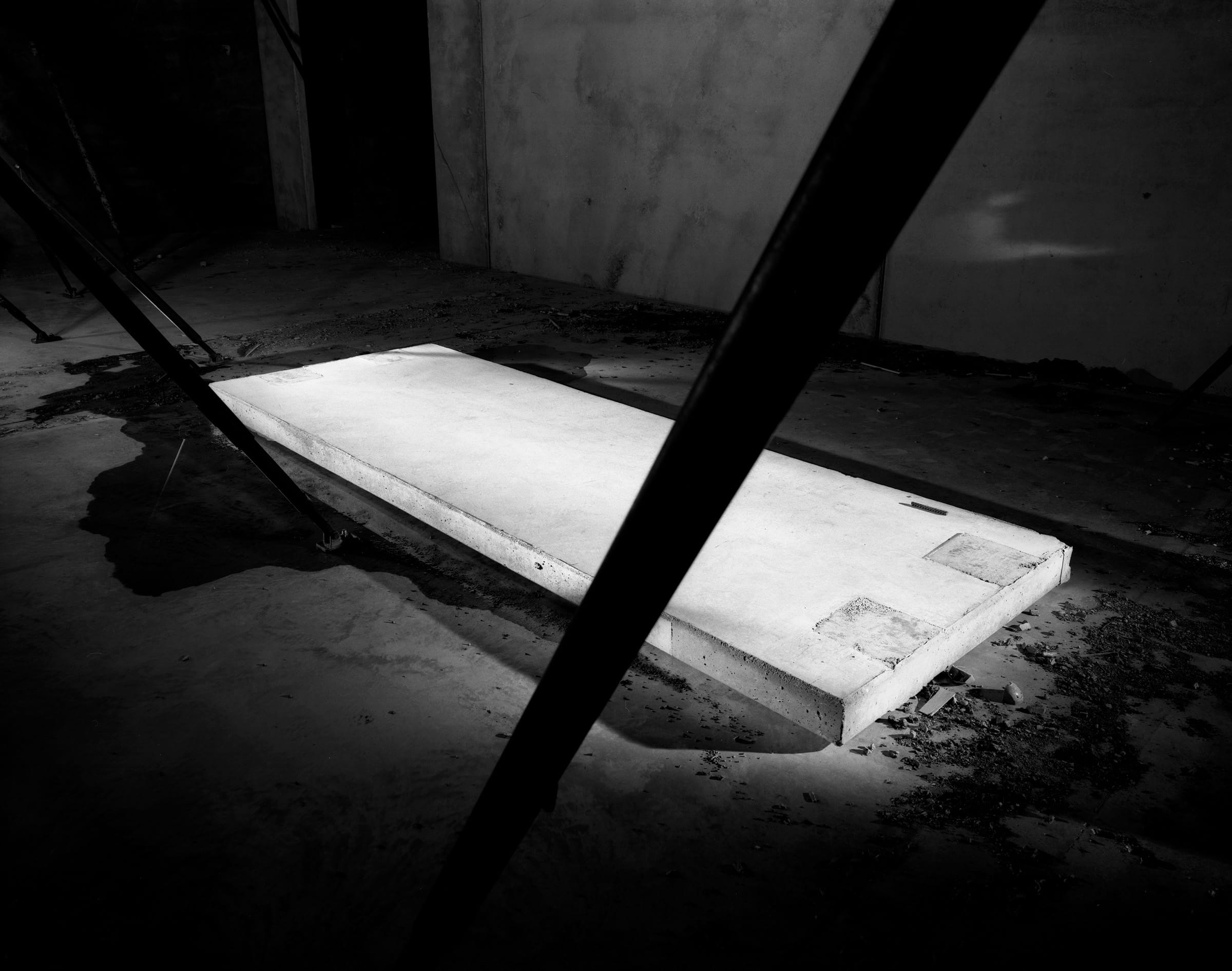 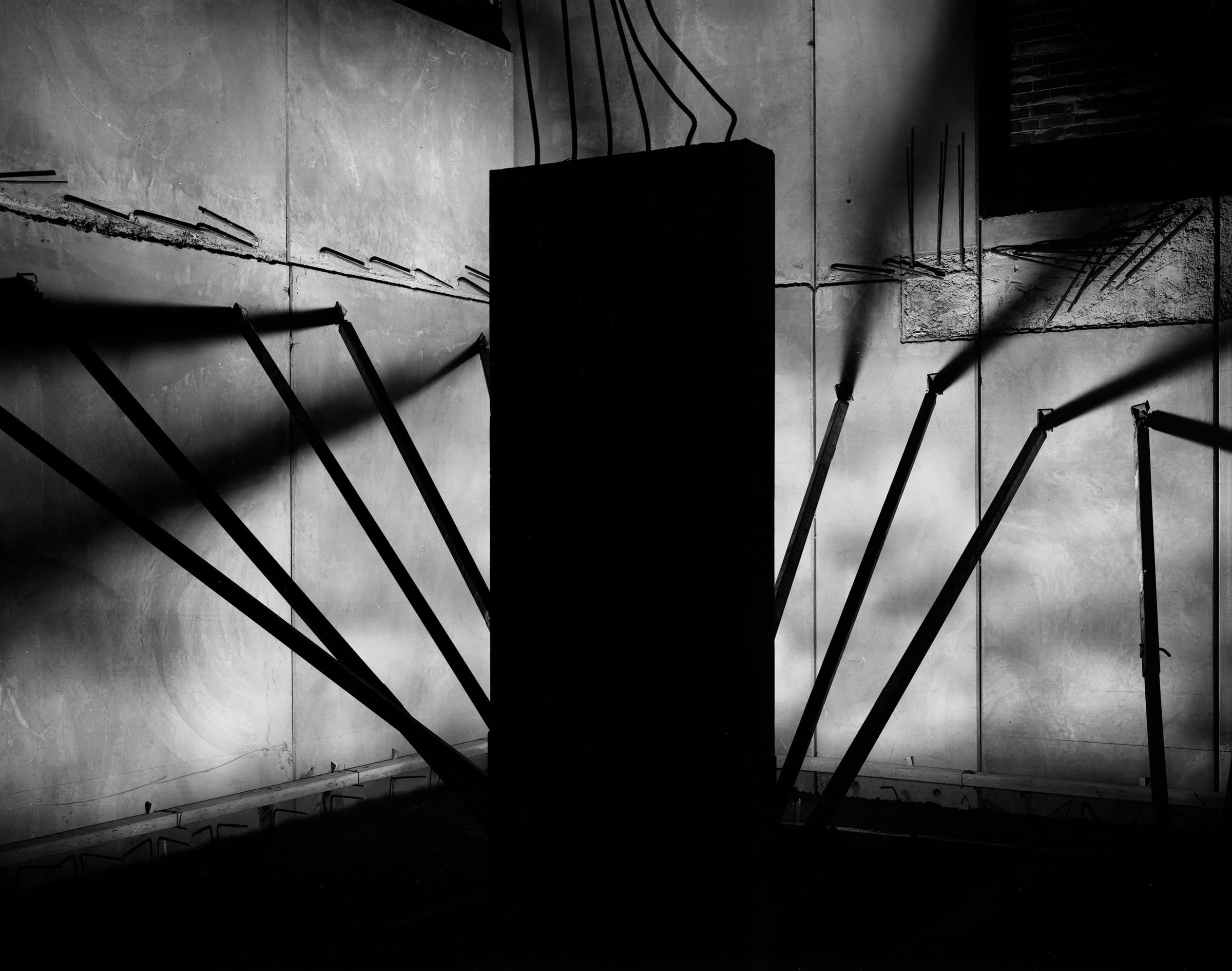 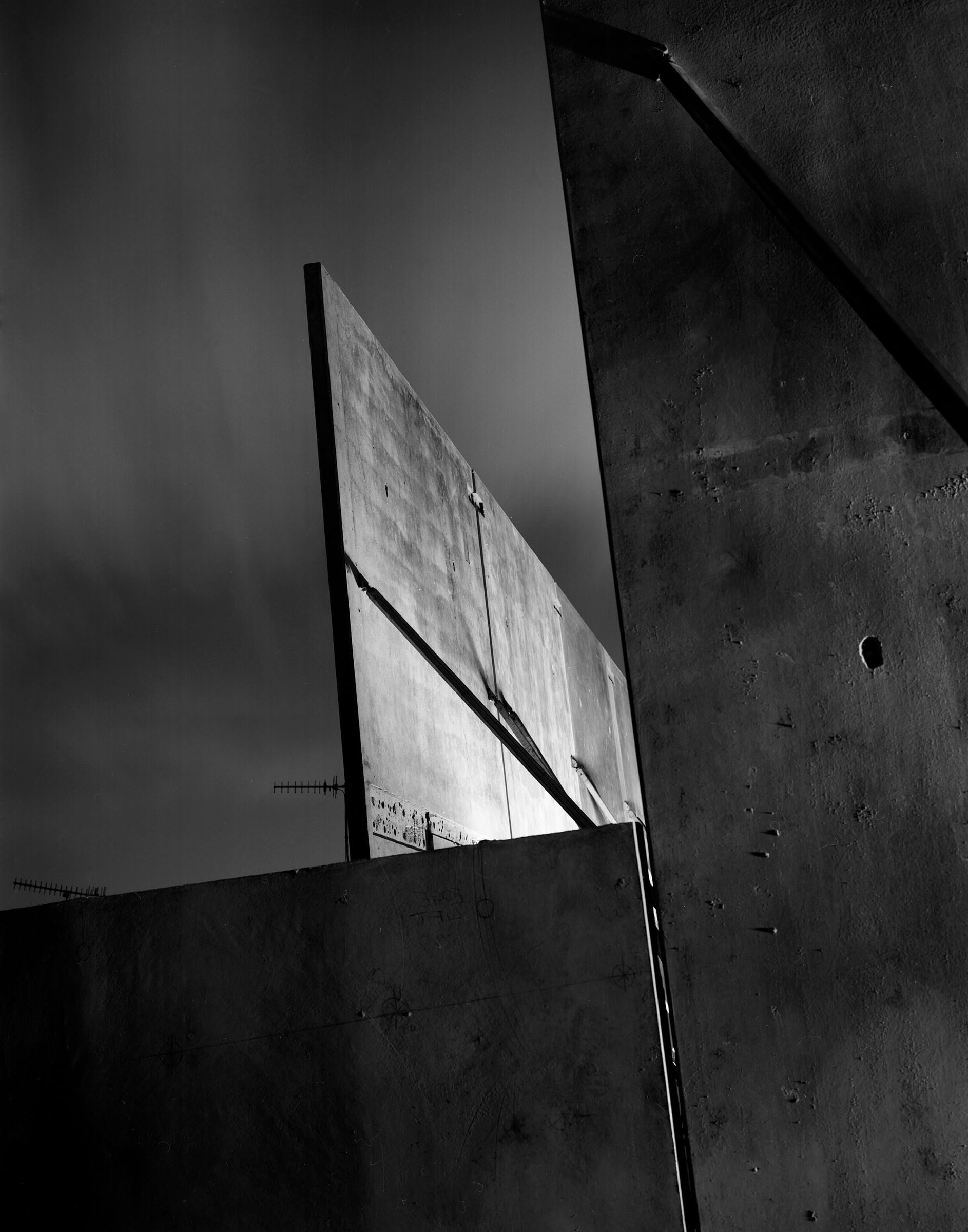 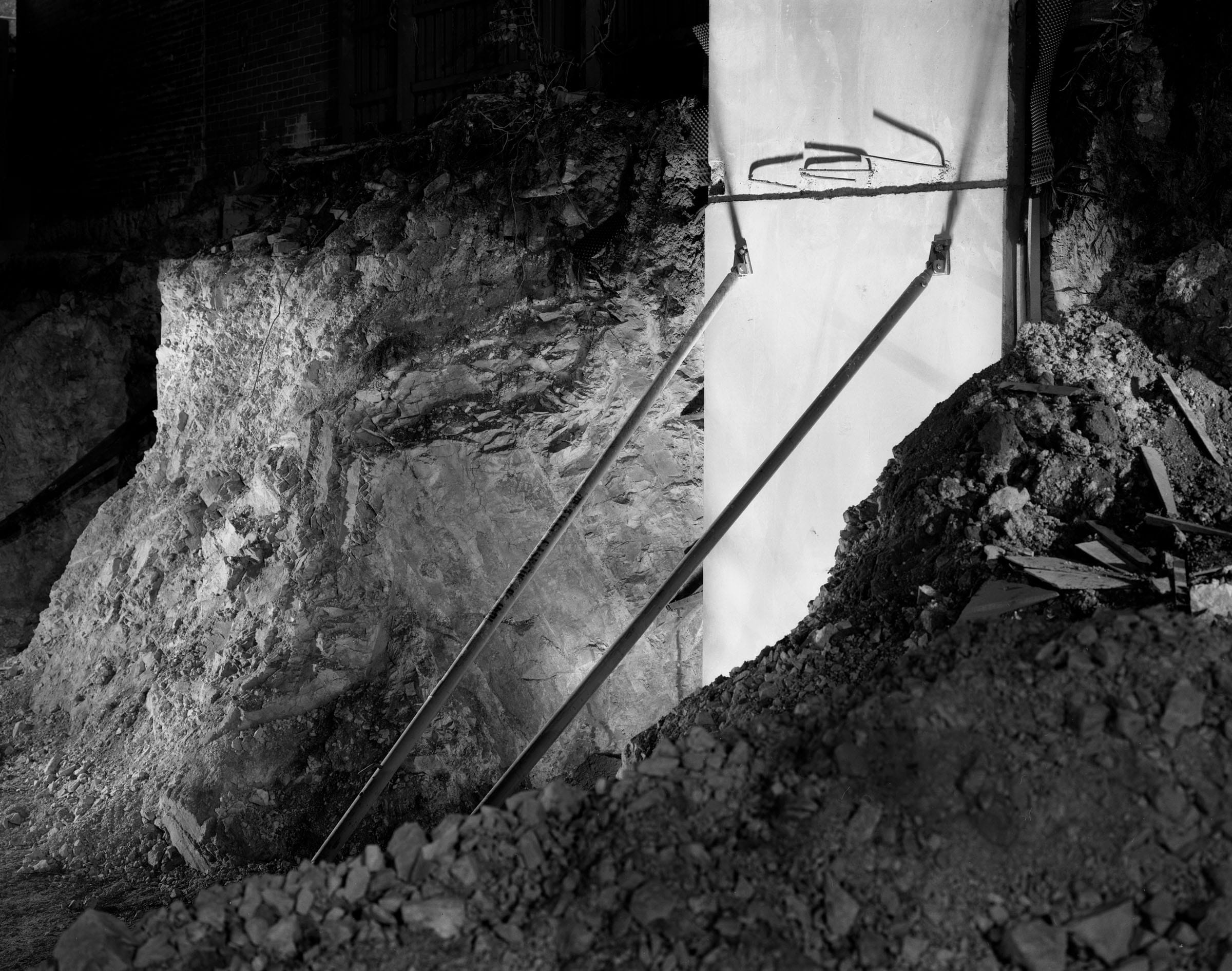 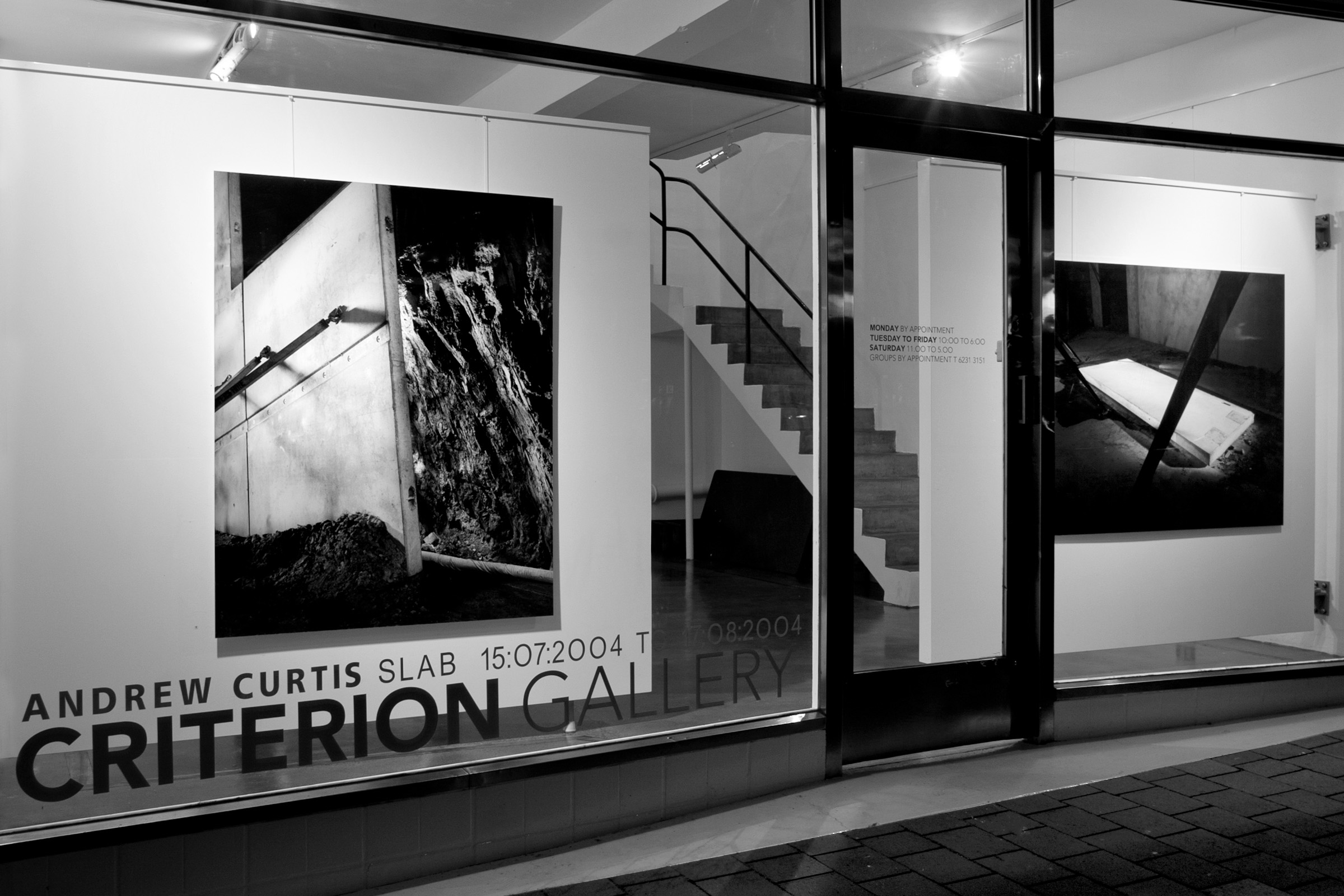 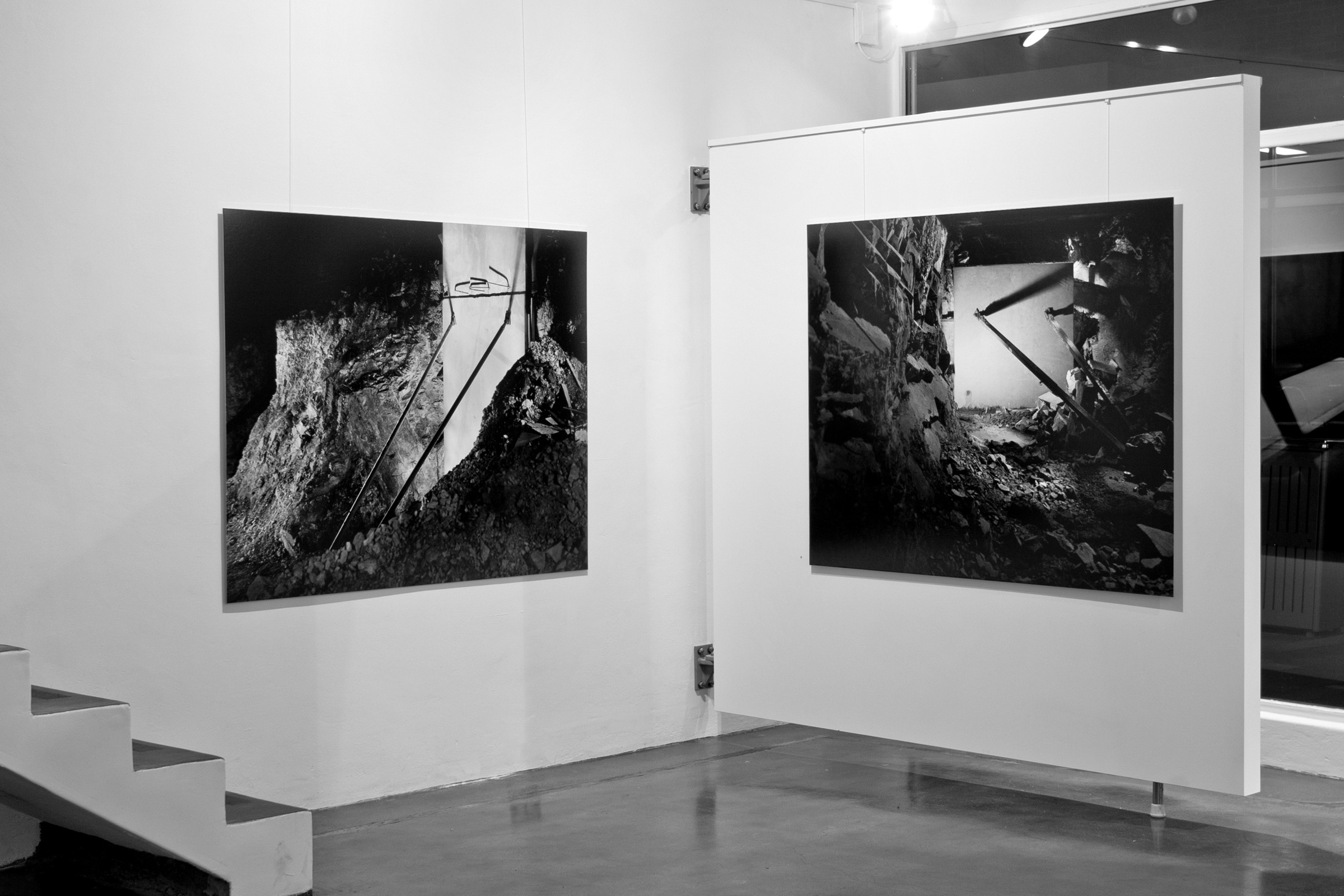 Mordant wit governs the title of Andrew Curtis’s current photographic exhibition. Slab is a word leveraged by irony, of meaning produced from disjunction. The noun conjures an aberrant and absurd range of possibilities: a prosaic architectural element, the bacchanalian vernacular of the beer slab and black-humoured mortuary associations. All of these evocations are gathered in a word propelled by raw, onomatopoeic power. Adjacent to the title are the images themselves: beautifully produced and executed to high formal standards. The tension in the works, like the title of the exhibition resides in the cool synthesis of seemingly incompatible things.

Formal and narrative power ensues from strategic placement of unexpected elements coherently held together.  In part the works’ tension derives from the quiet erosion of the viewer’s initial presumptions. Our strategies for reading the photographs continually change and have to assume another form or another approach. Interpretation is continually revised as we journey into the maze of the picture surface. This process is first encountered upon reading the titles. Each image possesses a documentary title such as Maddock Street, 2001 or Toorak Road 1, 2002 but geographical and temporal specificity is disrupted when viewing the sequence. Locations are almost interchangeable, depicting a world of standardised, serial building production. Each place is site specific and site-less in its striking unoriginality. Moreover these sites are non-sites: they have been erased. By now each pre-cast concrete slab and supporting scaffolding has vanished from view: the referent of each photograph has disappeared. Concrete slabs, cyclone wire fencing and metal bracing are present, sharpened with such an arresting stillness in these images that it’s almost impossible to imagine these weighty, material forms enclosed, built over, surrounded and buried alive. The titles authenticate the photographs’ ‘documentary’ power but the seam between word and image unravels as it stitches architectural and photographic sites together.

A sense of the tangible and elusive haunts this work. The surface of each image organises an extraordinarily coherent formal composition. Subject matter appears highly legible. Dramatic lighting, the sharp edges of material objects and abrasive contrasts – dirt against concrete, metal, rock and empty space – provide an apparent and precise sense of immediate recognition. Yet on closer viewing the sense that we are grounded in clarity wavers and begins to fray. An oblique view is offered at every scene. Only parts of buildings are revealed: the larger context is suppressed, the frame is concealed. In many of these images we have no idea which part of the site we occupy or how these isolated elements might relate to the overall building. We are adrift from the master plan or bird’s-eye view. Other disconcerting strategies are employed: objects are not centred, depth of field is not continuous and abrupt spatial shifts fracture a work like Maddock Street where disparate spaces appear to abut each other, eliding continuous, recessive, perspectival depth. We are situated in some strange middle distance to the subject matter and forced into a contrary psychological proximity. Elements loom over us in  Dover Street, Maddock Street and  Stephenson Street or because of our oblique viewing angle a concrete slab lowers (Triholm Avenue, Palmer Street, Stephenson Street 2) or structural columns cast in darkness assume totemic power. Perceptual ambiguity challenges composition’s crisp geometry.

This visual dislocation produces a tapestry of other tensions. Orthogonal and diagonal lines precisely map these spaces. But other elements threaten this ordered, angular, world: looming ground surface planes, mounds of dirt or striated rock, tilted foreground framing devices or vertiginous diagonal beams and rods. When coupled with chromatic lighting, spaces are both illuminated for us and radiantly undone as well. These formal devices energetically unleash the unsavoury associations of deserted night-time sites.

In Andrew Curtis’ world we inhabit nocturnal wastelands emptied of daylight and inhabitants. We trespass upon abandoned places. Narratives of the city can pullulate with urban anxiety. Out of the night, out of the unknown space we are threatened. By what: fear of strangers, or illicit or violent activities? It is difficult to coherently name this dread but trepidation creeps upon these sites like the shifty vacancy of urban badlands. Sometimes the architectural elements are conjoined in menacing ways: the metal scaffolding rods appear to pierce the concrete in Toorak Road 1.  In works such as Dover Street or Maddock Street, the architecture is literally and metaphorically braced: in anticipation, en garde. Moreover, a certain mortuary quality invades the images. We stand amidst dirt, in enclosed or underground spaces and darkness reinforces the threat of entrapment. Associations of the grave haunt the radiant slabs. With claustrophobia, the fear of the tomb, the fear of being buried alive, fragments of old tales sediment this urban archaeology. Familiar ground throbs with unsettling emotional spectres.

This unease may be partly ascribed to the sublime aesthetic framing these ordinary places. The sublime conventionally dramatised nature’s menacing authority. Architecture assumes the place of nature here, lit and scaled to press upon us with anthropomorphic power. The sublime appeals to the irrational and architecture’s insistent rationality, its systematic production of built form is suppressed in these partial urbanscapes. Two photographs (Palmer Street 3 and Chestnut Street) offer a more distant point of view, presenting a large-scaled architectural element only to thwart commercial building’s banal, serial logic. One image depicts a tall, blank flat wall plane, the other image presents a taut rectangular car park. Both works conceal the object’s adjacent domains. Questions whirl upwards. What exists on the other side of the wall?  Where does the concrete horizontal slab of the car park run out? What occurs in the dark and impenetrable spaces? These places teem with possibilities as both a lure and a threat. Suppressed and unrepresented spaces undermine our power to control and manage the visual field. Each centred view produces geometric precision and visual clarity but precludes coherent knowledge.

Curtis’ urban archaeology is a gleaming knife of threatened malevolence. A series of careful strategies produce tension and unease. His devices – architectural surfaces, brute scale, raw industrialised material and the absence of human inhabitation or even its traces – align the images with North American minimalism yet signal a distance from this body of work by opting for a grunge noir of discomforting associations. Photography controls our point of view. It limits our access in order to expand the terms of a given realm. Andrew Curtis takes us into an urban underworld, the sublime night-time of the everyday. 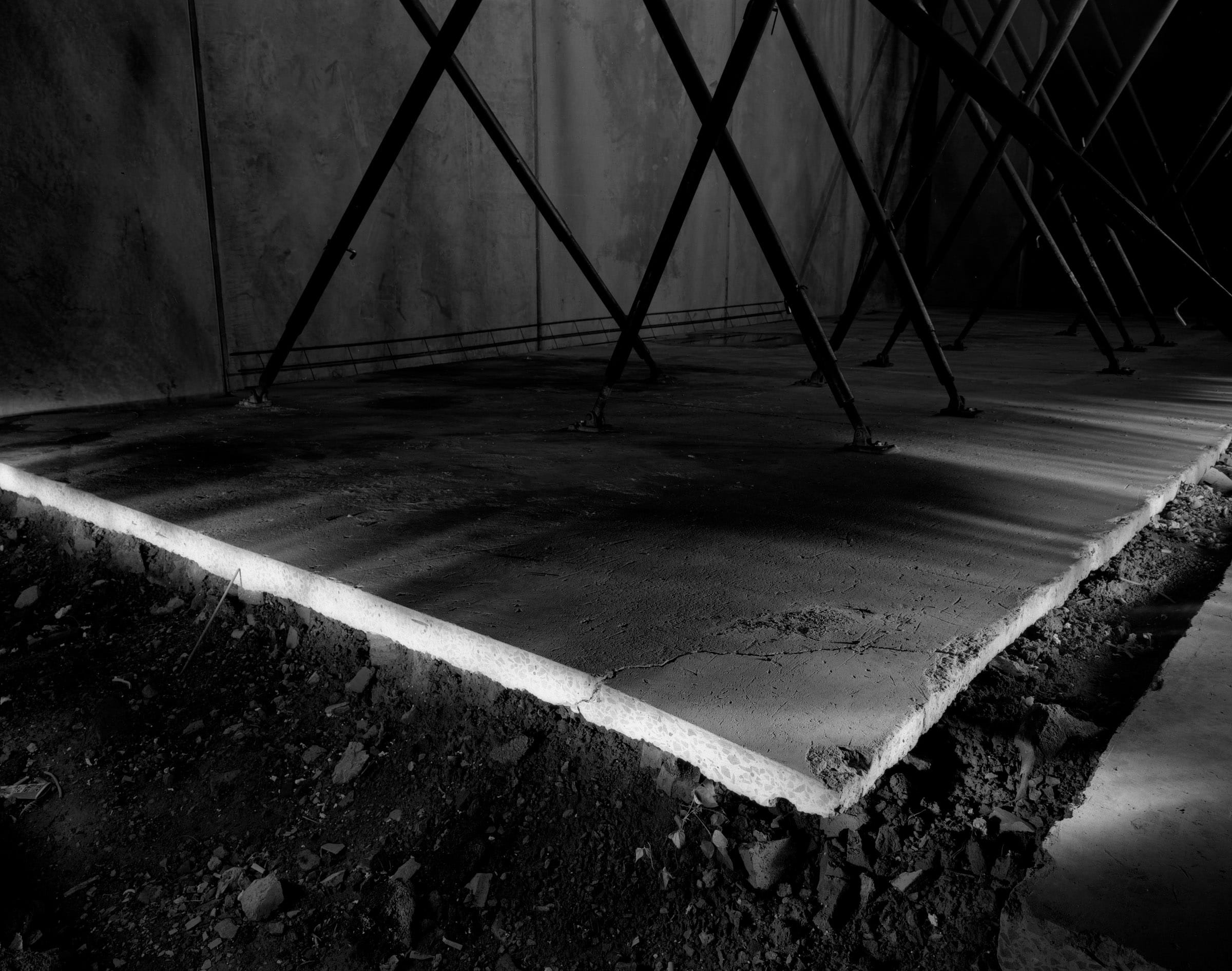