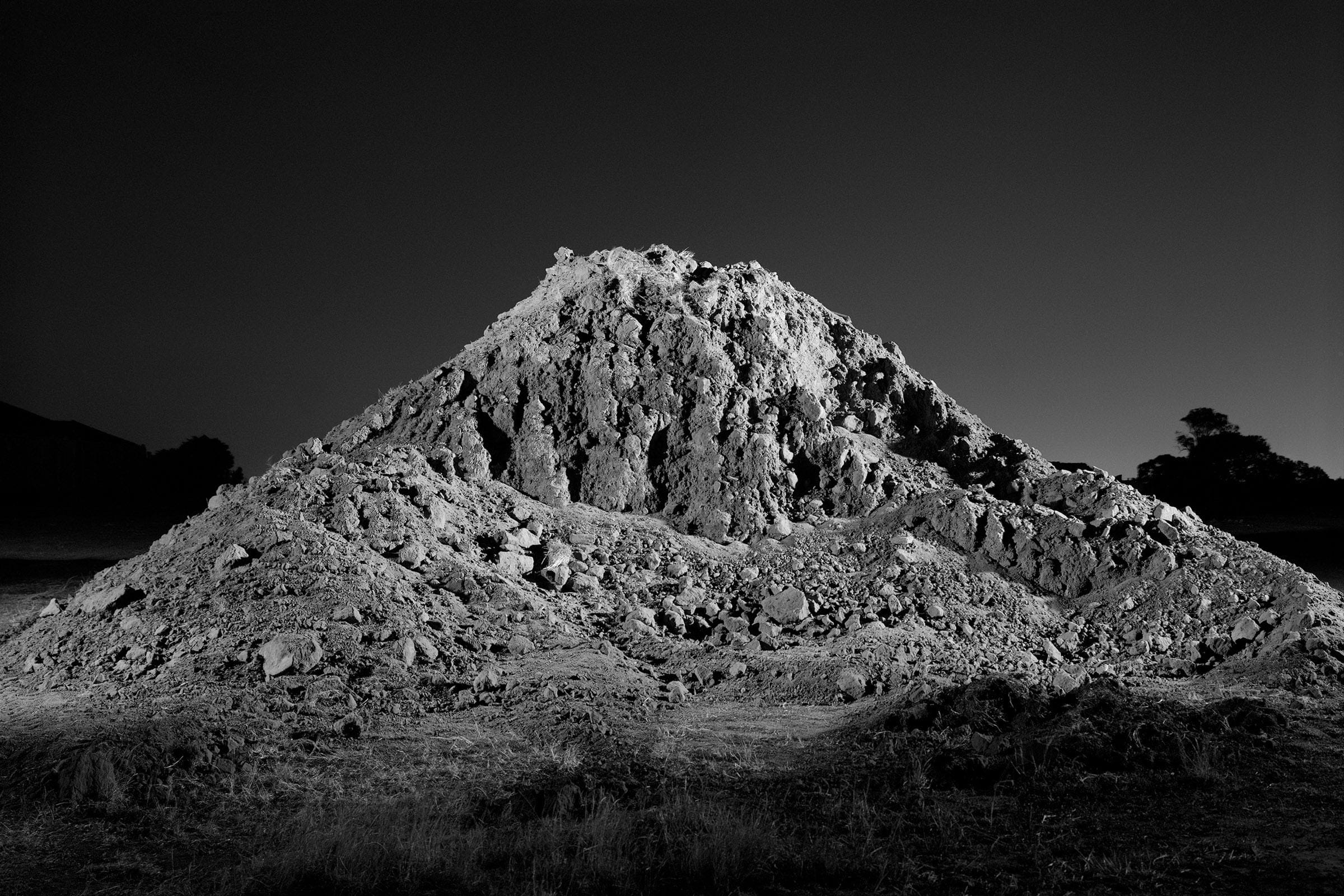 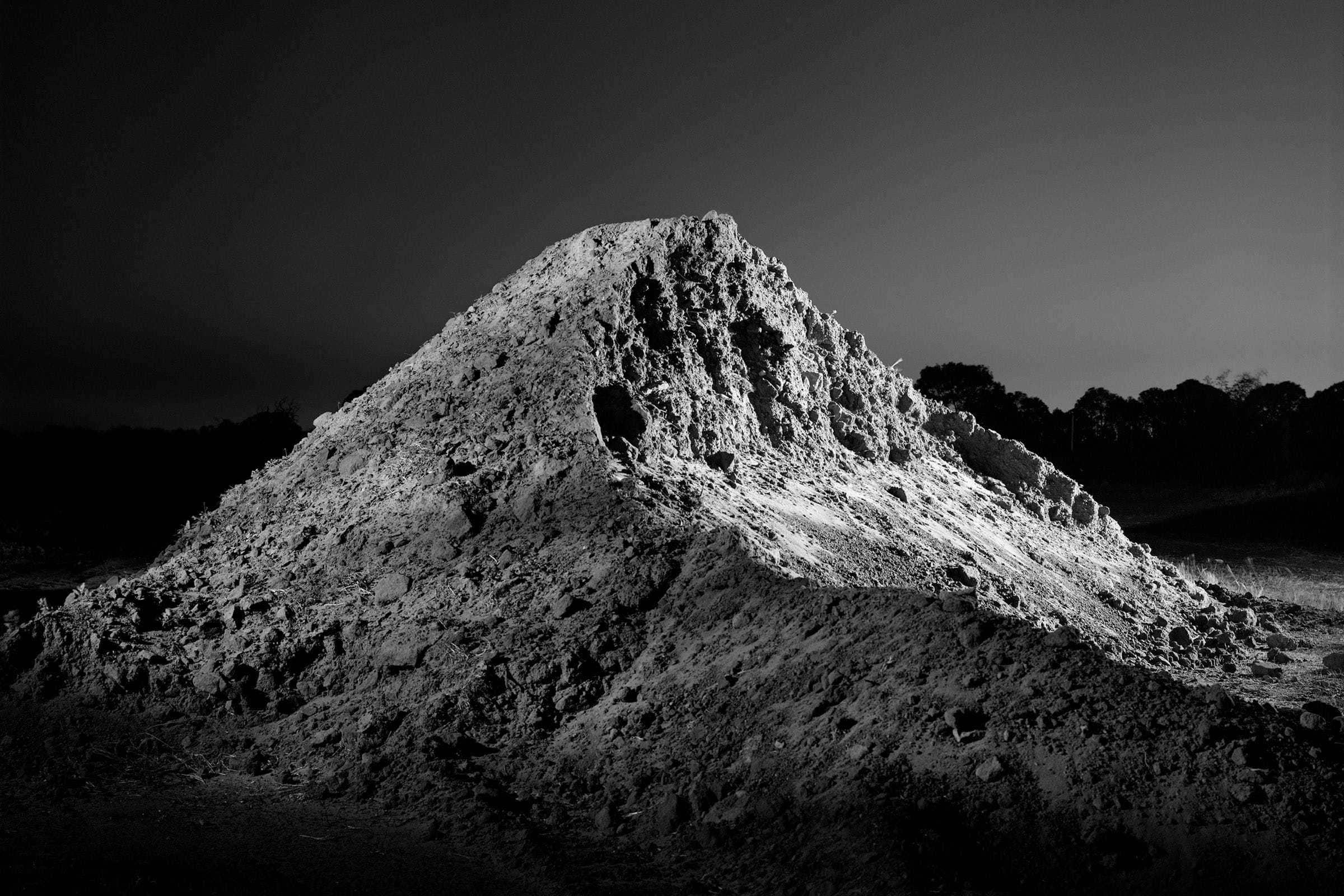 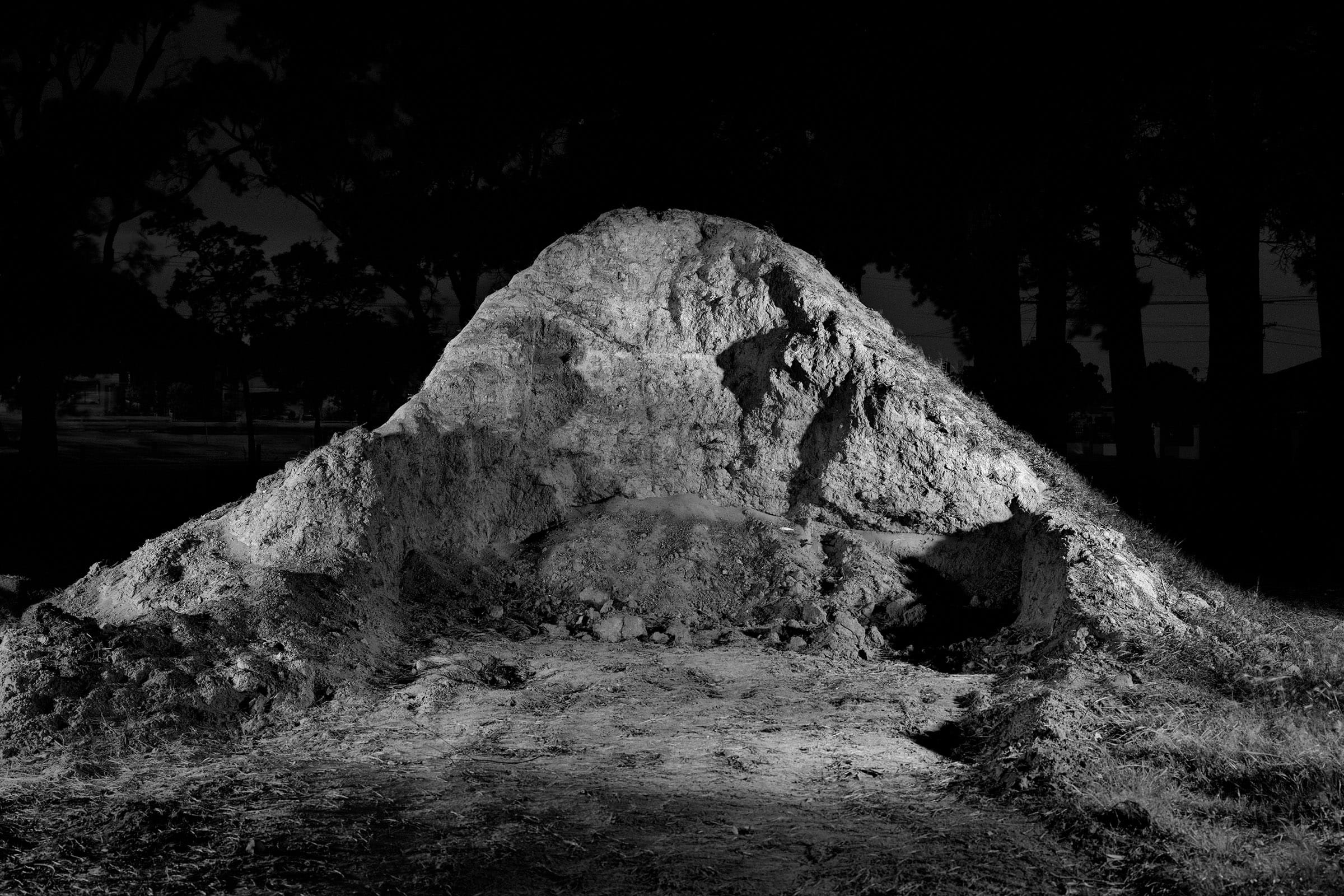 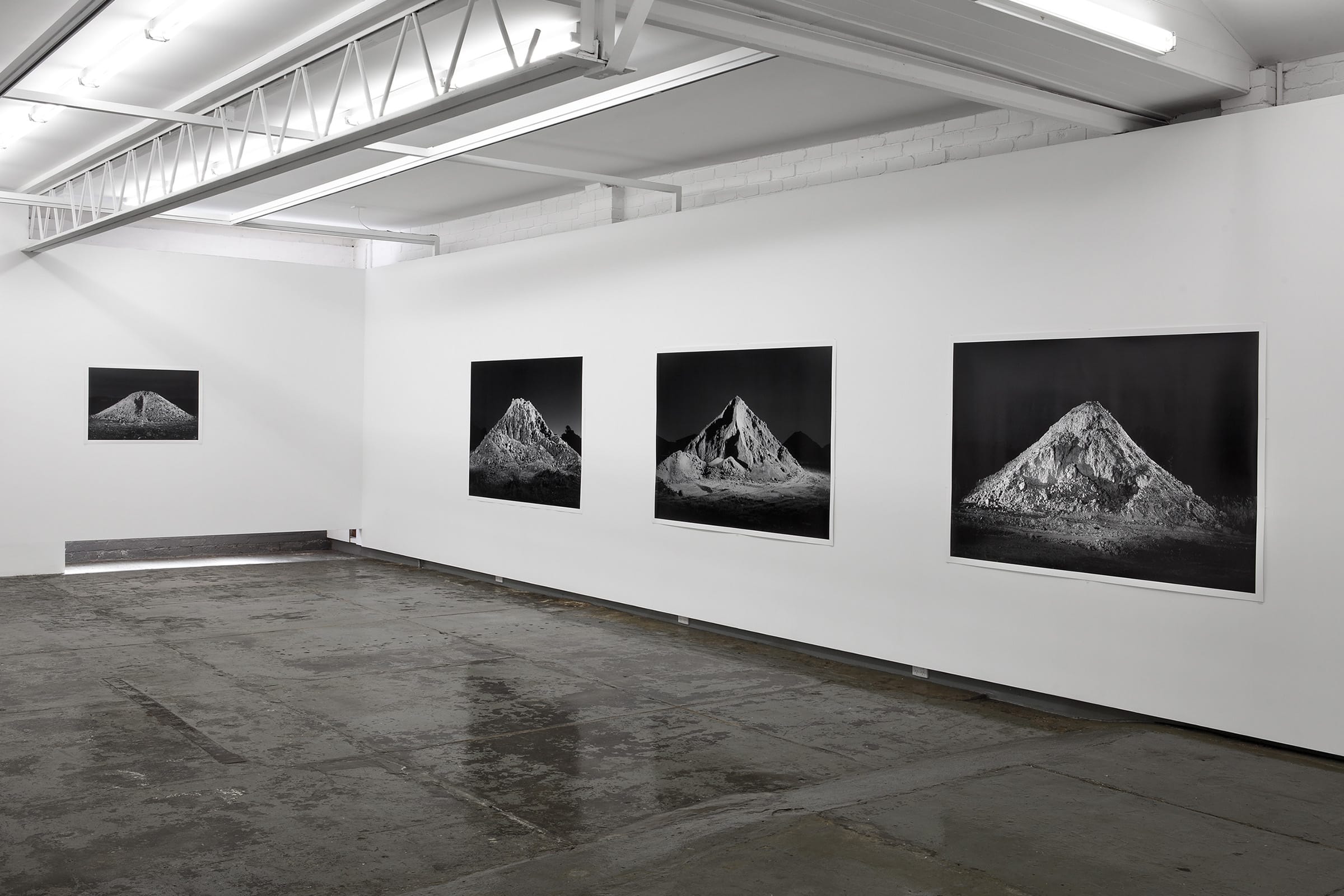 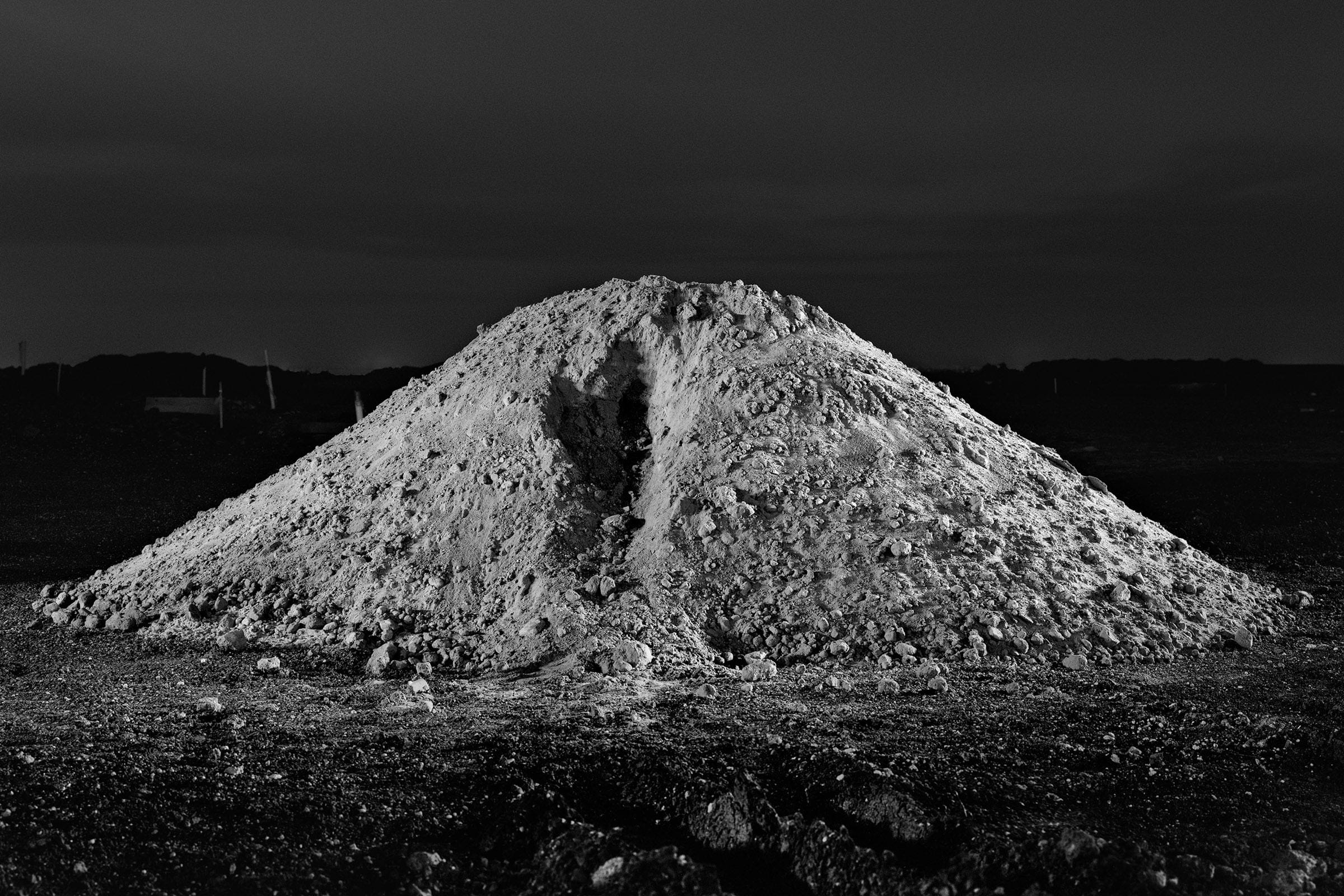 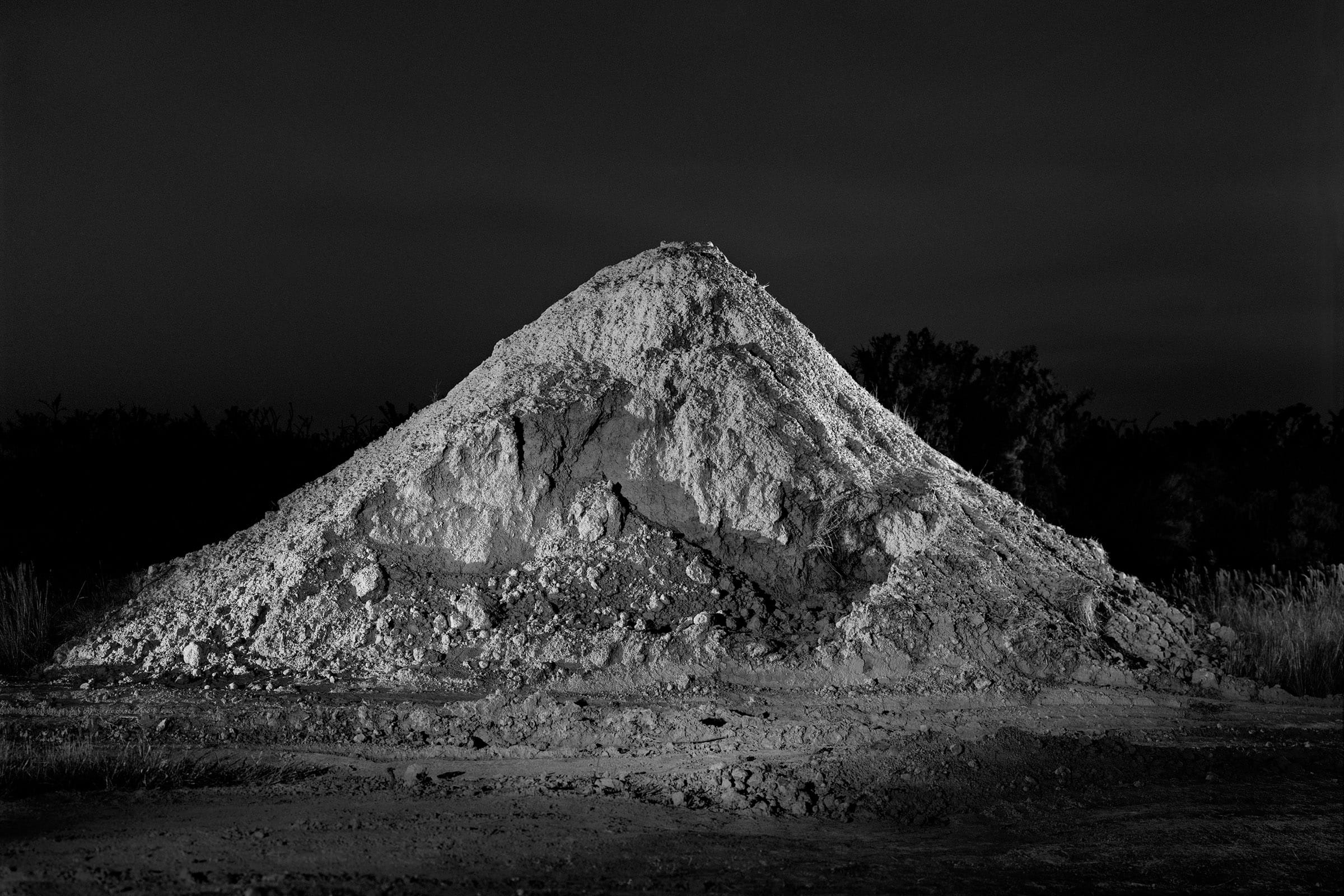 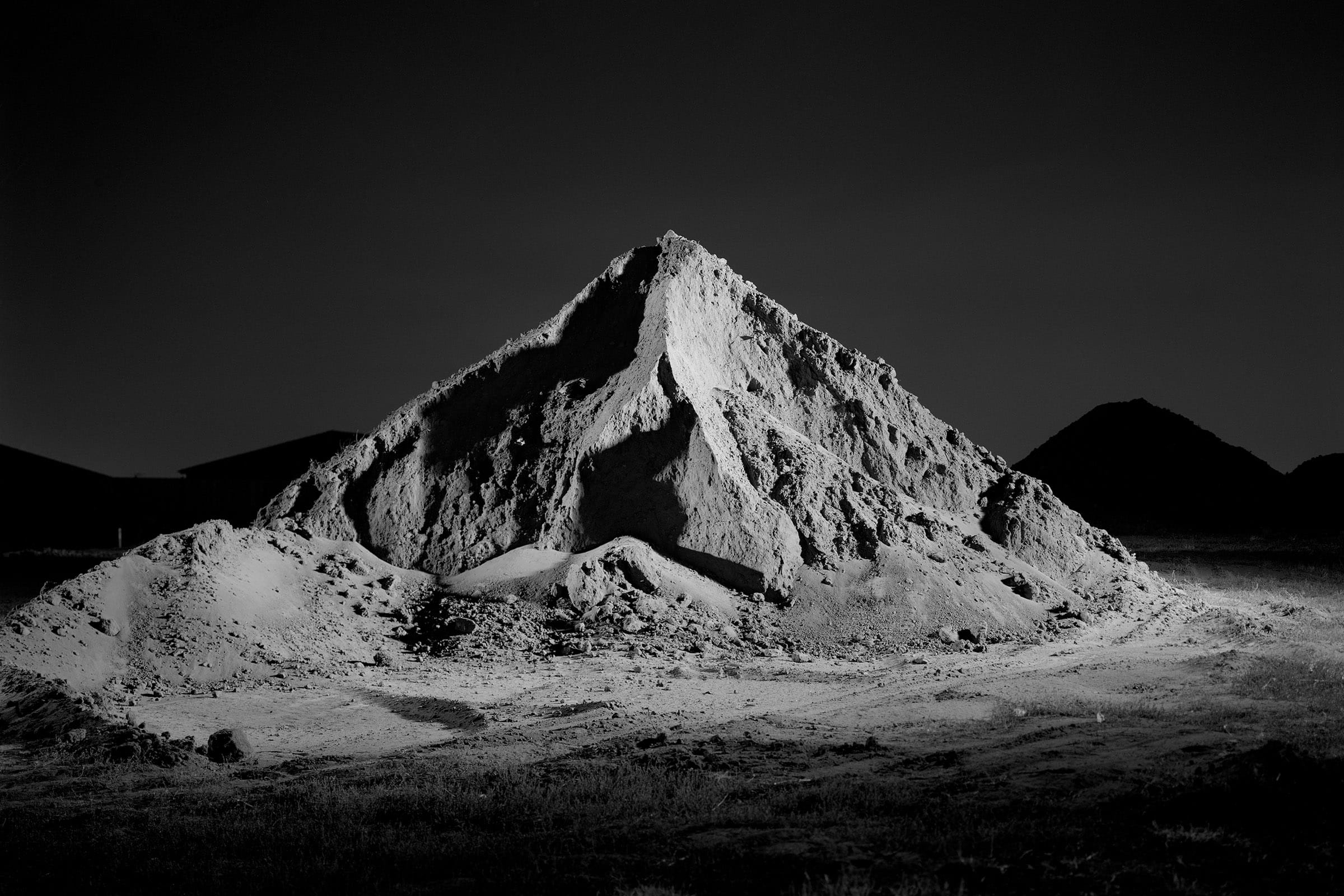 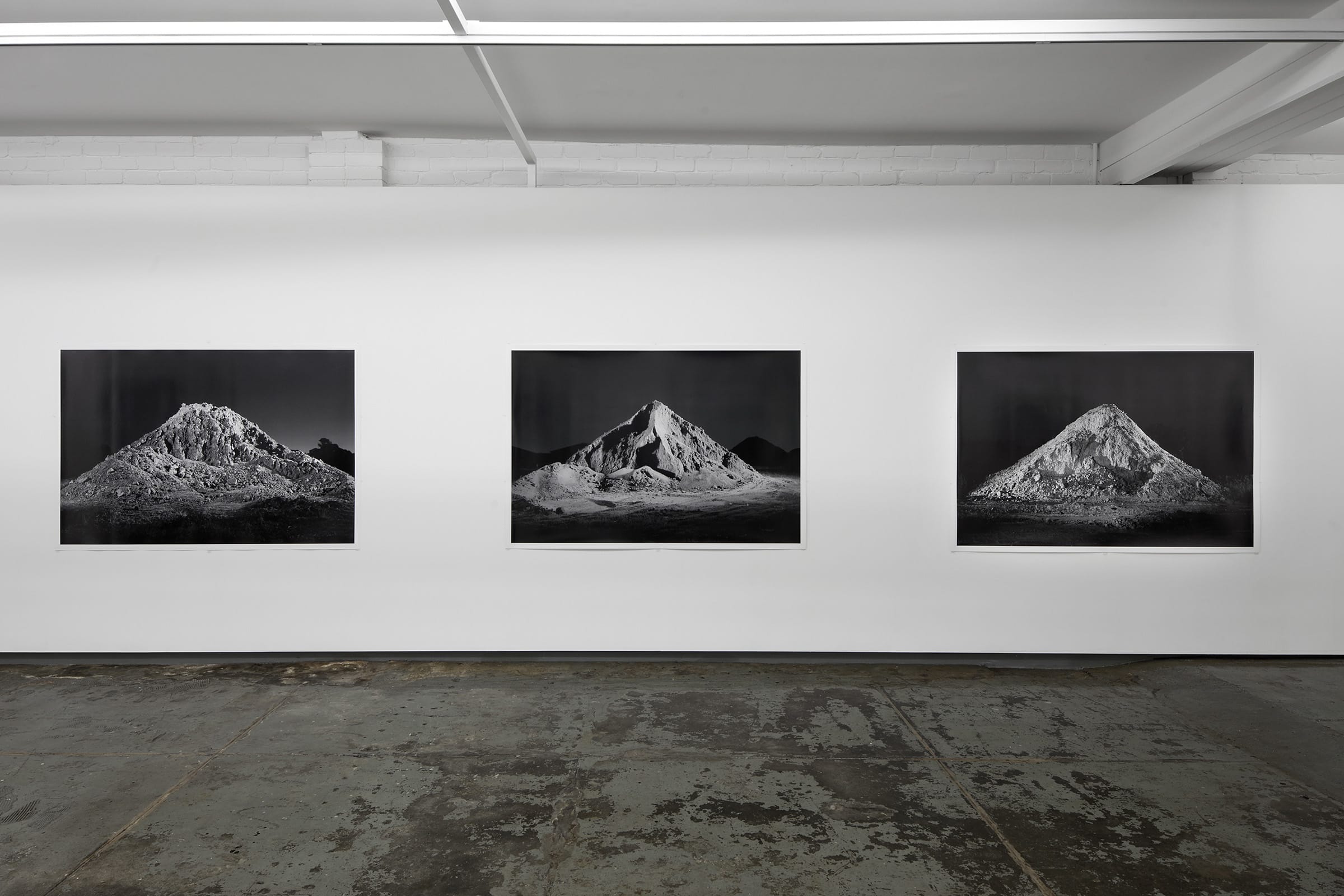 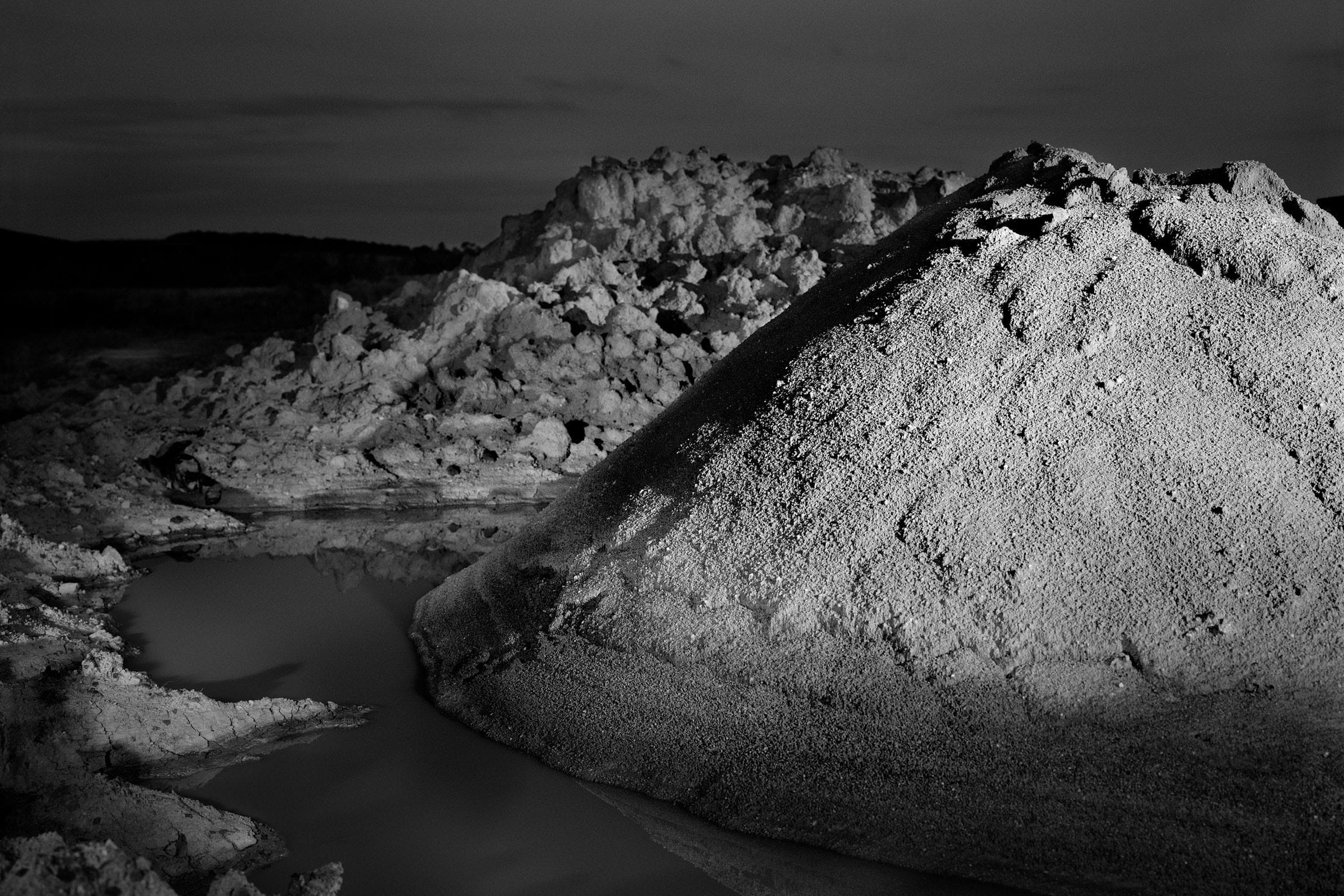 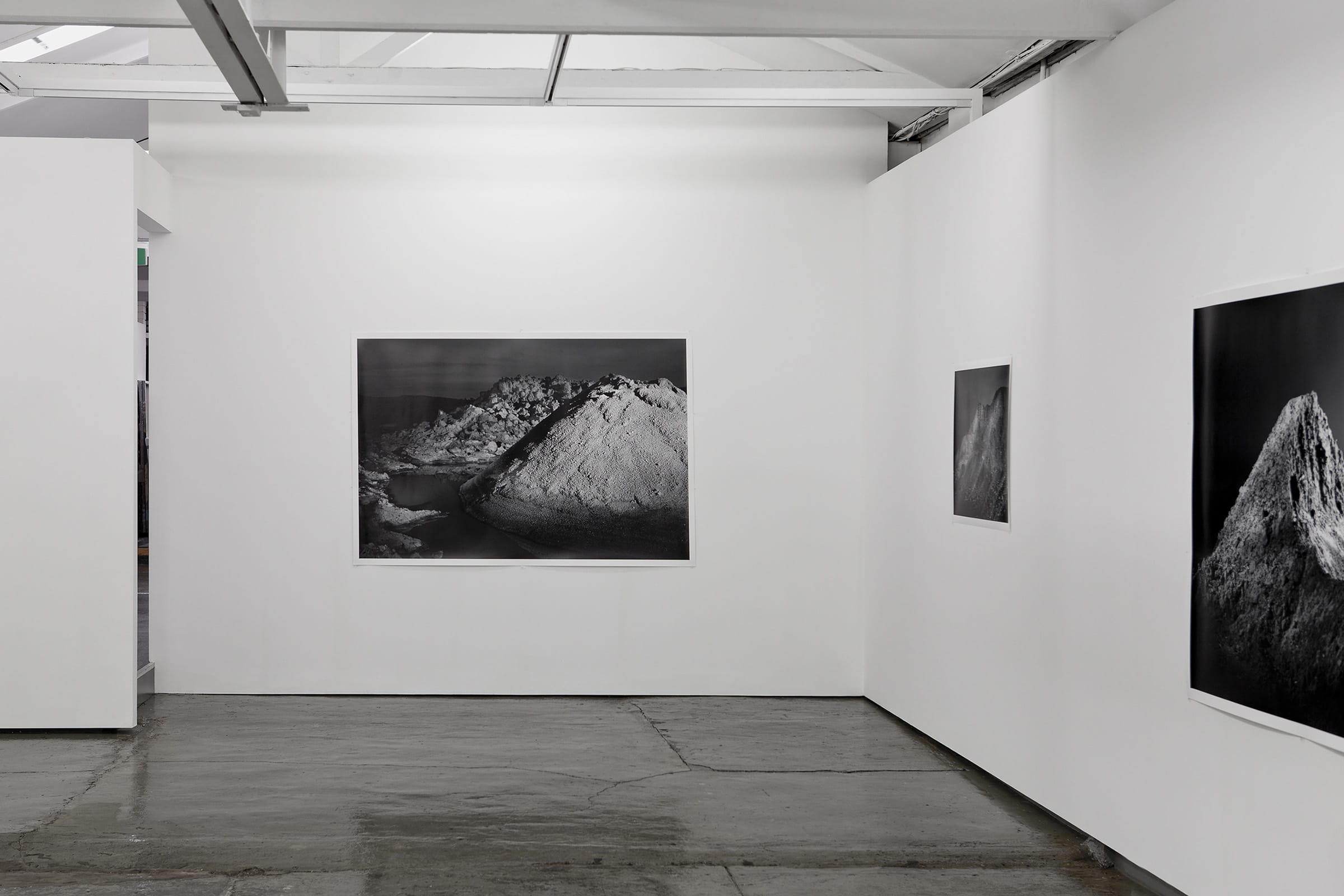 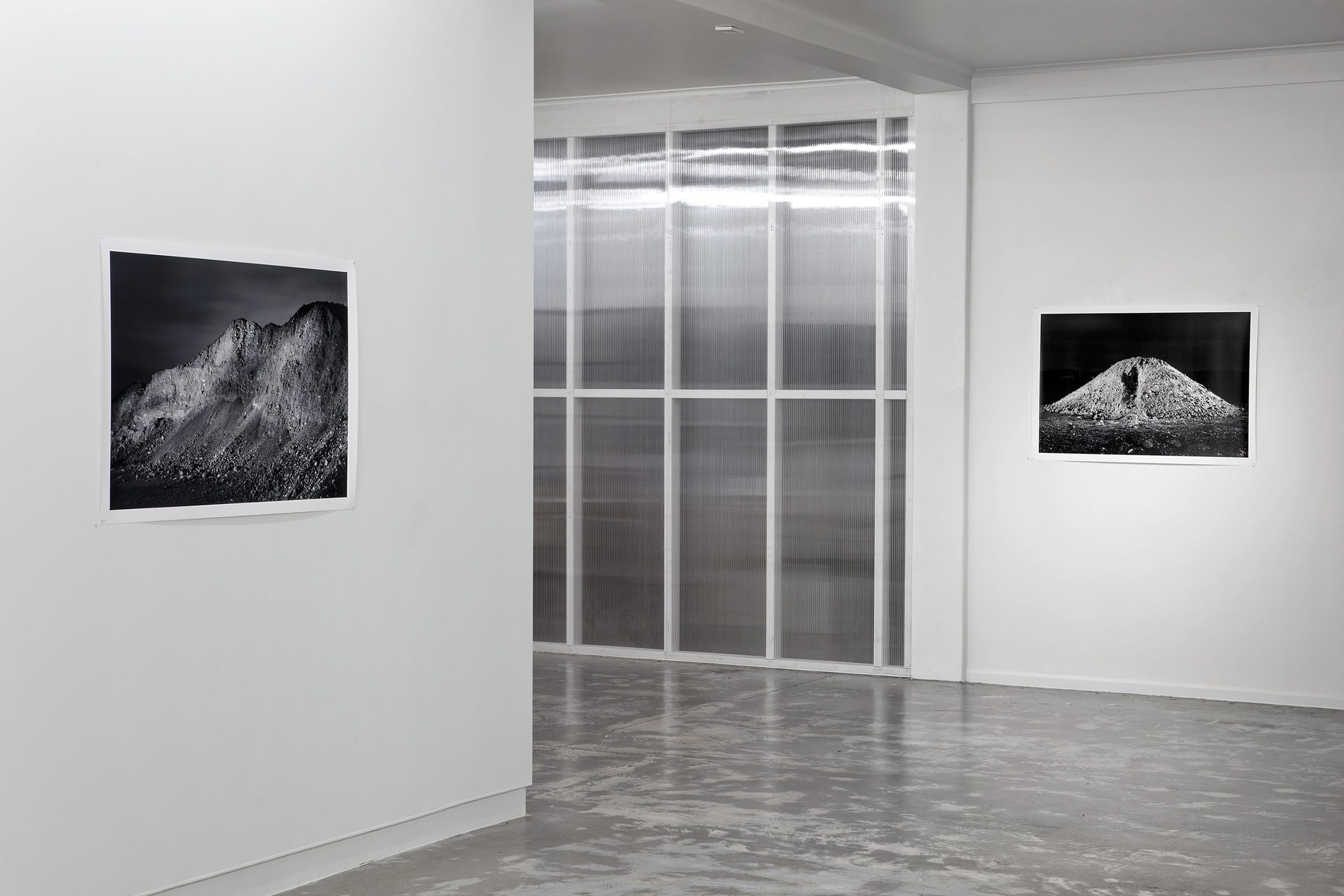 When the Apollo astronauts walked on the moon, they were carrying Hasselblad cameras. They captured images of a landscape whose profound strangeness forces us to reassess the usual ways we conceive of land and our relationship to it. They evoke in us a category confusion between landscape as we know it and something literally unearthly. Untouched, untilled, unmade by human presence of any kind, hills of rock and dust shimmer in unfiltered sunlight against shadows cut like holes, the sky black; a landscape of the unconscious.

Like them, Andrew Curtis’ recent works possess this uncanny quality and mix pictorial modes usually not felt to belong together. He describes this work revealingly as an “artificial typology of mountains from another world, a sort of sublime, romantic version of Bernd and Hilla Becher’s typologies of the industrial landscape”.

The grouping together of photographs as typologies, as Curtis has, implies objectivity, rationality and the possibility of knowledge through revelatory combinations. But those expectations are dashed here. There is nothing to be discovered or explicated, nothing to know. The pictures are a synthesis of incompatible notions – the Bechers and their cool scrutinising on the one hand, the romantic sublime on the other – so they give us pause.

The symmetry and repetition of many compositions might normally imply stability or even timelessness, many forms visually echo pyramids, but there is a notable lack of reassurance.

The subject matter – piles of earth in new suburban fringe housing estates – suggests an affinity with the influential New Topographics of the 1970s, a tendency, particularly in America, that is still pervasive in the photographic landscape; cool, acerbic pictures of anonymous non-sites in unremarkable locations, made with a scrupulous absence of style. But the resemblance is misleading.

Like them, Curtis makes his pictures in out of the way locations. In an alchemical transformation of base materials, he lavishes the most banal subject matter imaginable with concentrated attention involving an elaborate, slow and exacting shooting method. This requires him to enter into the picture space during exposure, lighting by hand.

In life, these shapes exist only for the shortest time before they are graded to make foundations, but while they do they are loaded with expectation and intentionality. Their monumental forms imply permanence and even grandeur, but piles of dirt have only the most tentative existence. As you read this, they are already gone.

Foundations imply strength but also optimism. The word implies that something is or will be founded and it’s true that families will grow here, memories will be laid down, dreams dreamt. But hopefulness is repudiated in these images. The sun has set and no stars shine. Instead, we have a landscape as unheimlich as the surface of the moon or a spot-lit television sound stage. The only terrain being surveyed is one that can’t be measured, an interior landscape.

Unlike the brightly lit wide shots of the topographical tradition, Curtis withholds the internal content that would enable us to determine context or scale. There is an absence of reference points, often very little sense of the horizon, no familiar signifiers of place or time-frame. It is difficult to know whether we are looking at a mountain range or a mineral sample in a laboratory petri dish.

The suburban fringe, where these pictures are made, is of course a highly contested space in civic discourse. It stretches government resources, is problematic environmentally, while its residents are overrepresented in statistics of unemployment, illiteracy, financial stress, criminality. This boundary, the liminal, represents a certain psychic frontier in urbanite imagination. Like all frontiers it comes with associations of wildness, the threat of disorder, the threshold of the known and unknown.

If Curtis’ pictures had a soundtrack, they would emit the low, sub-audible hum of David Lynch’s Eraserhead (1978). Like that film, his pictures feel like broadcasts from some internal post-apocalypse. They have the claustrophobic airlessness of the alien worlds knocked up on the set of Lost In Space (1965-1968) or any number of 60s and 70s sci-fi dramas that populated the nighmares of children for a generation thanks to syndicated re-runs.

Discussing his work, Curtis readily cites artefacts of popular culture, both high and low, and we suppose that he has been inspired by them. I think the reverse is true; that he intuitively looks for images that correspond to a vision already there, with him since the beginning of his work as a photographer: a certain correspondence to something that lurks in the interior, a subliminal landscape, irrational, imbued with dread.