In 1986, sound artist Philip Samartzis and I formed an experimental noise band named GUM. Over four years, we released several 7″ and 12″ records in Australia and internationally. By 1990 we had called it a day. In 2005, American record label 23five released a double CD, Vinyl Anthology, containing the complete GUM recordings from 1987 to 1990. 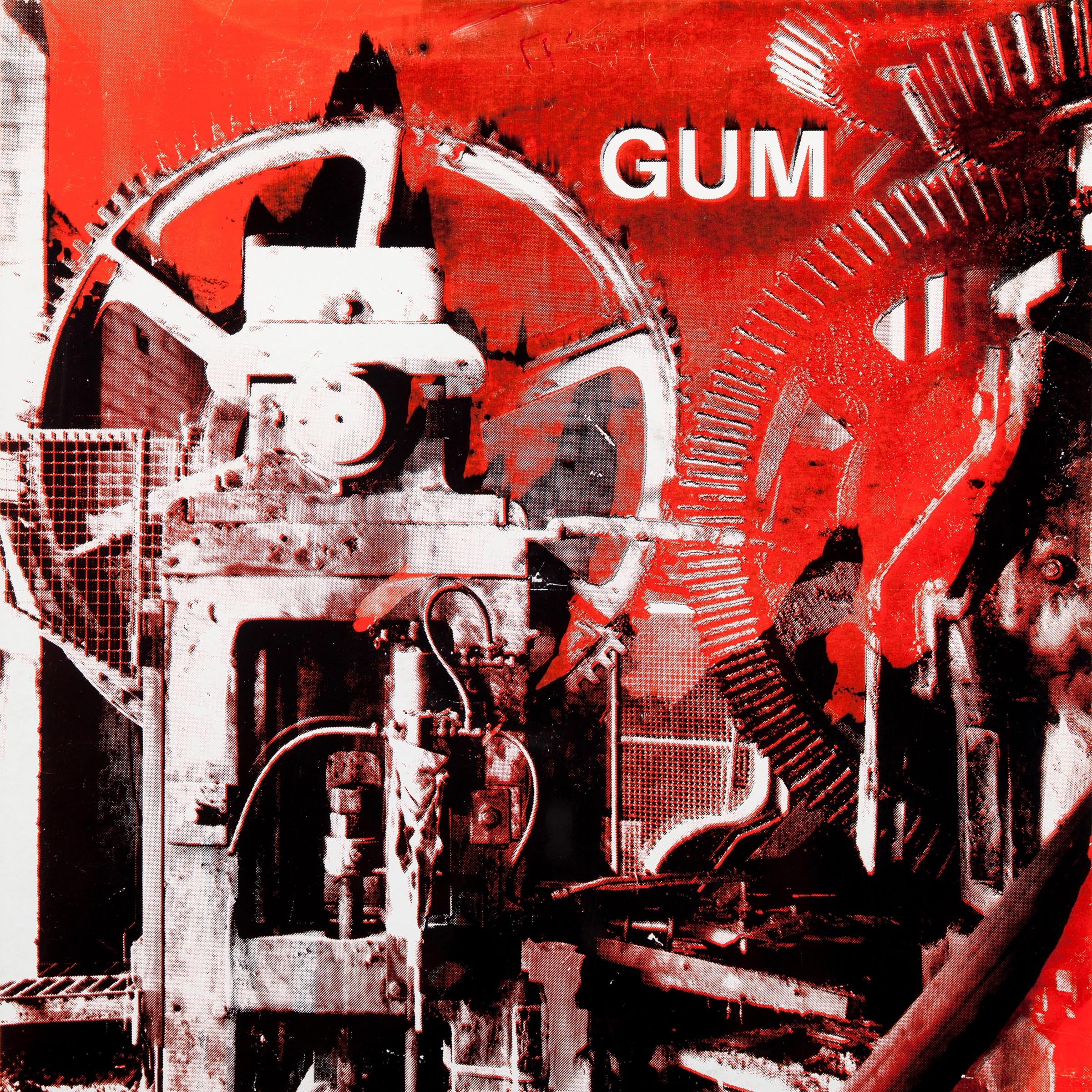 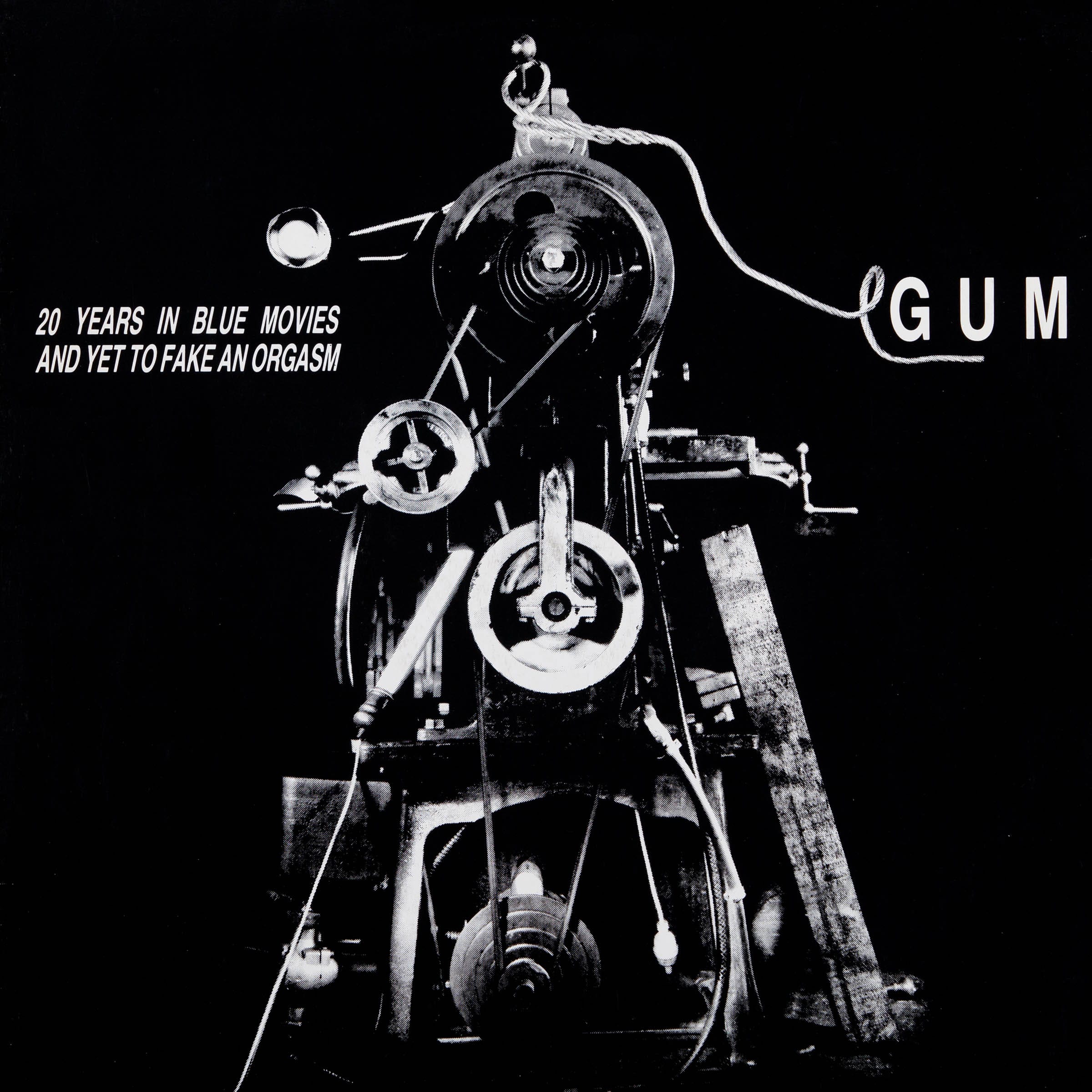 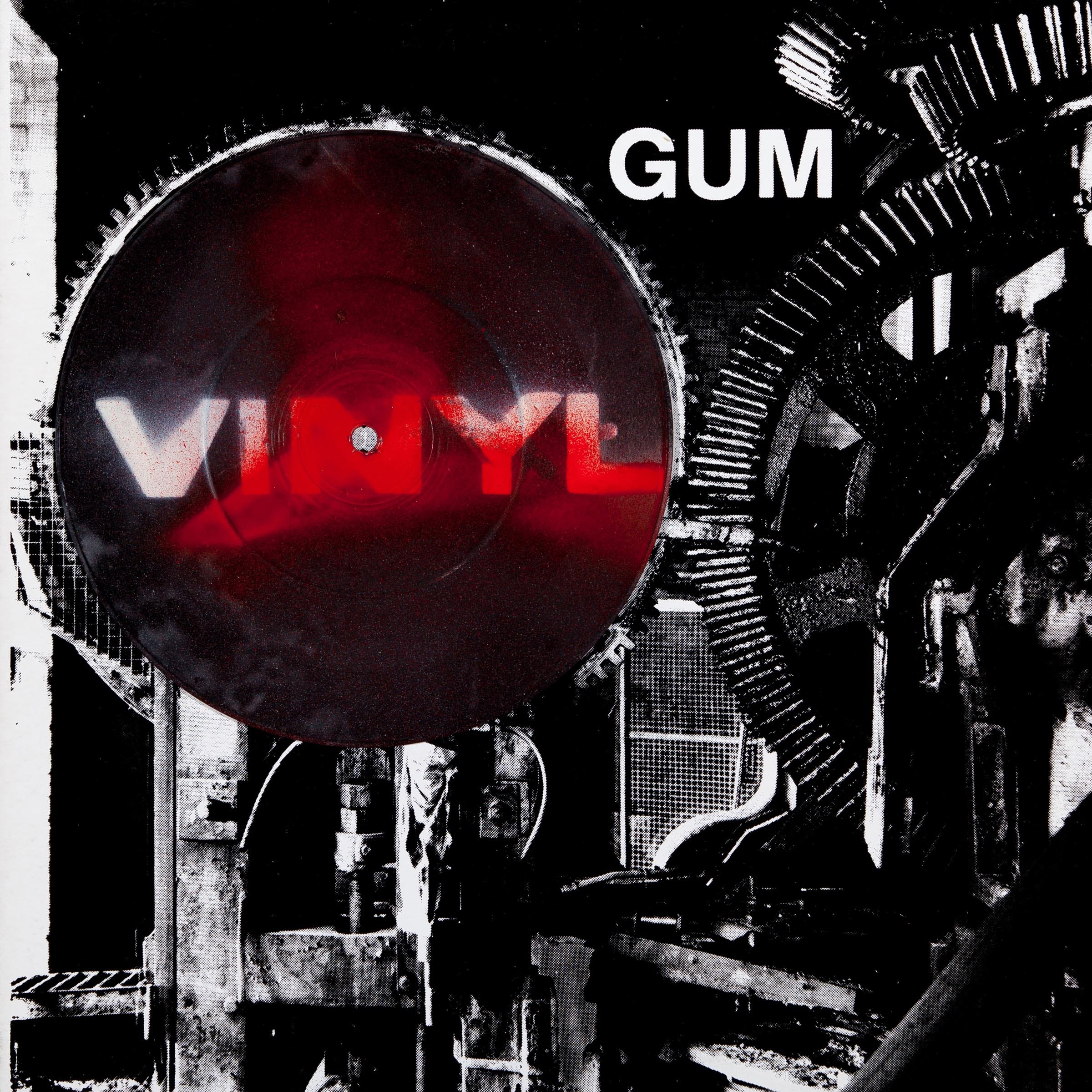 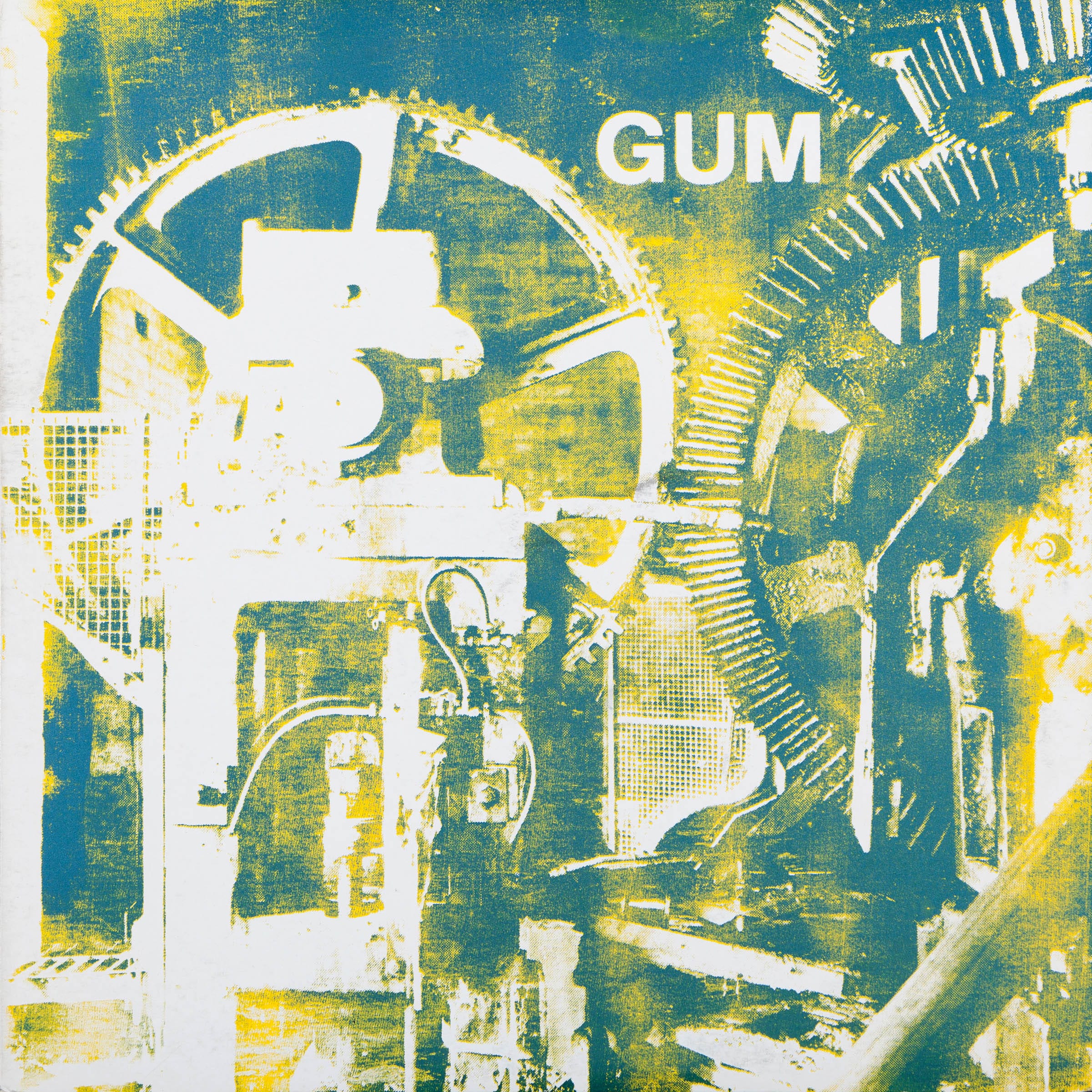 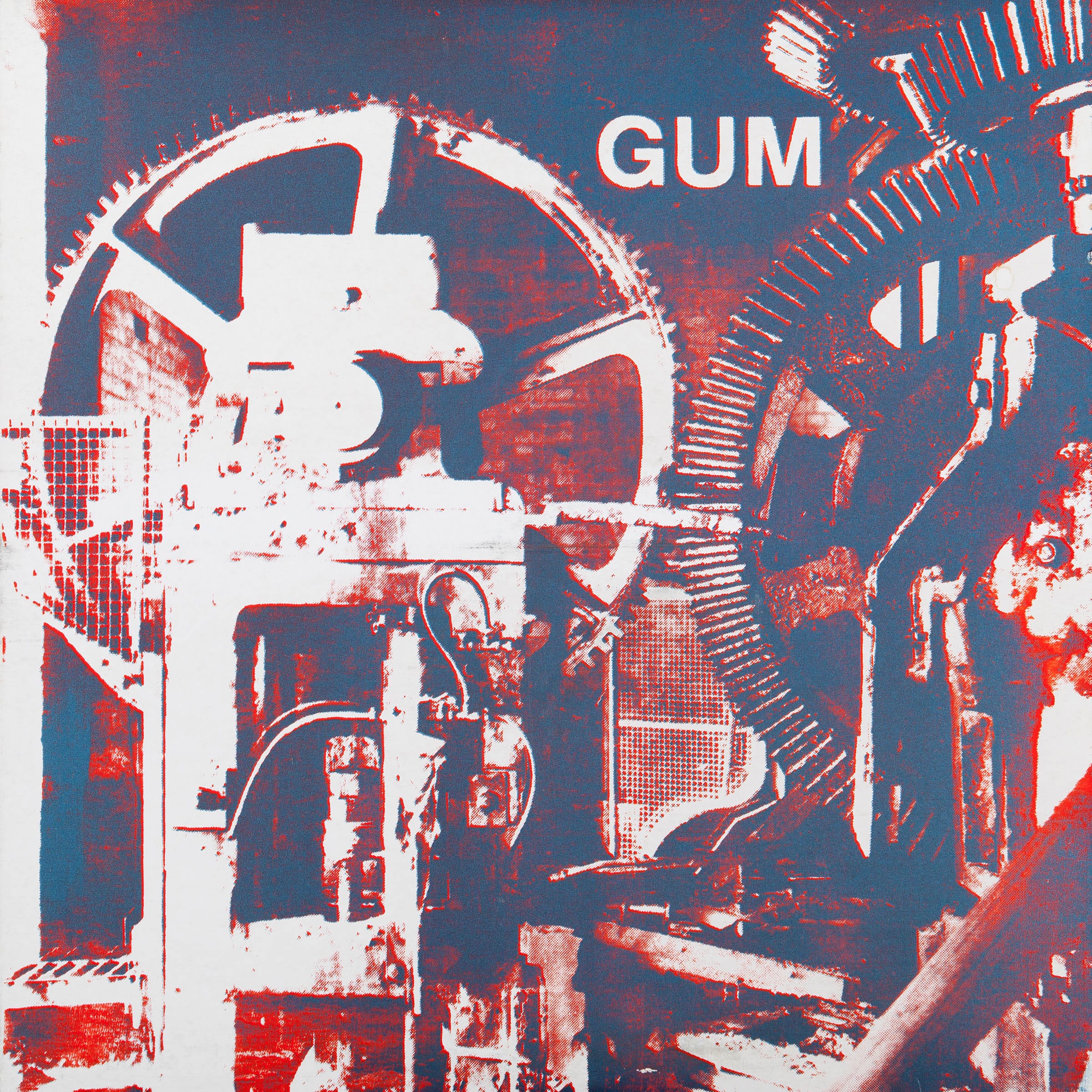 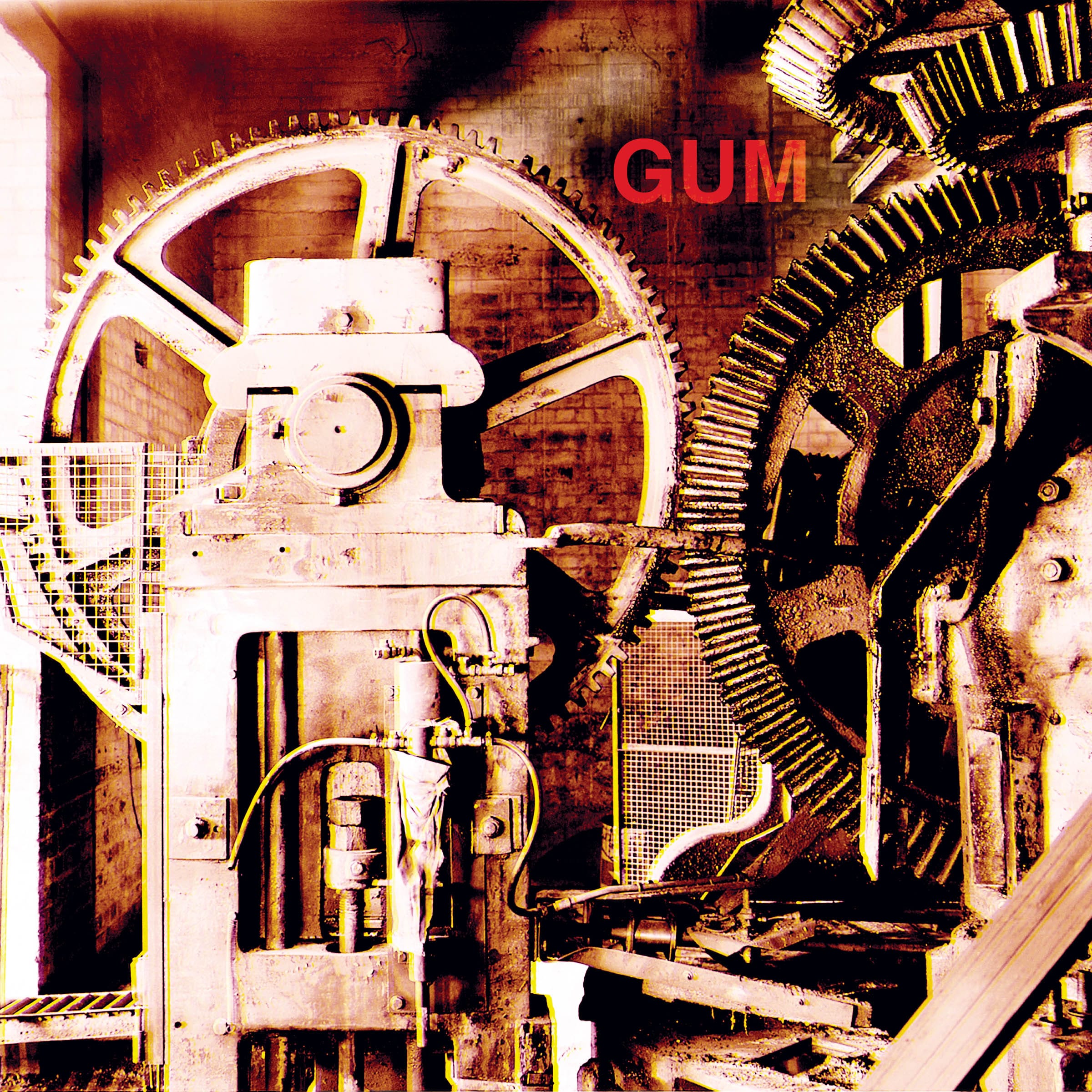 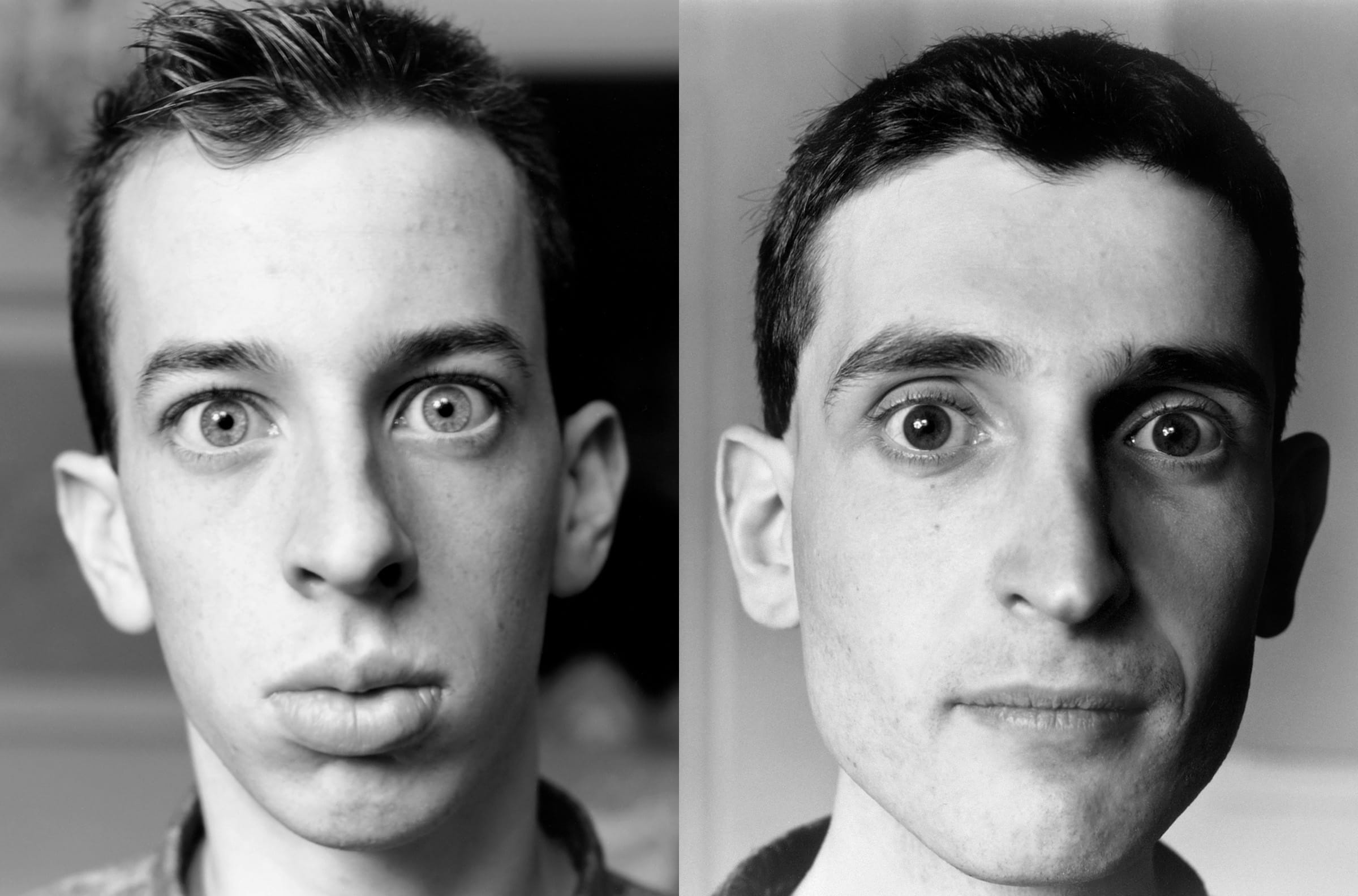 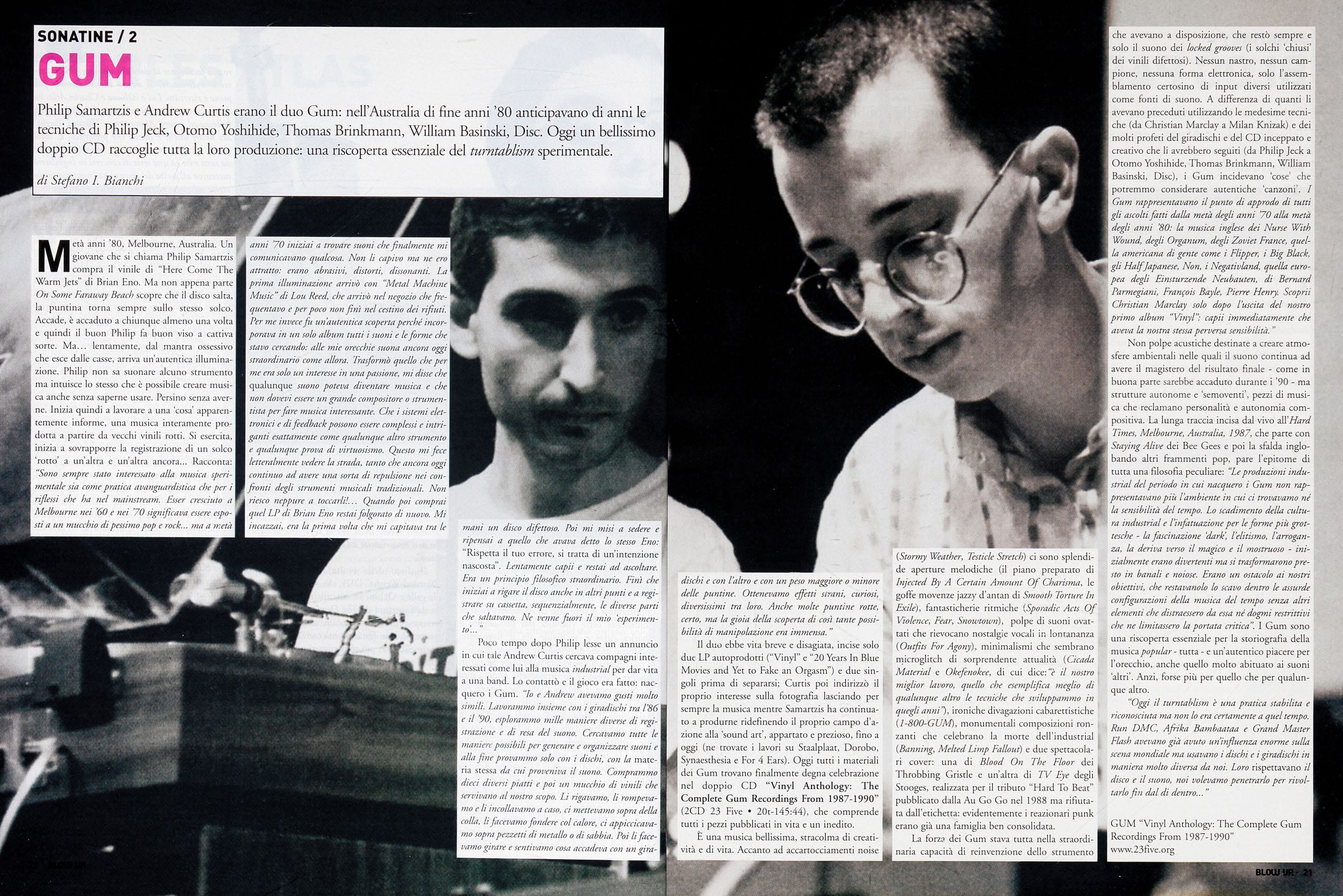 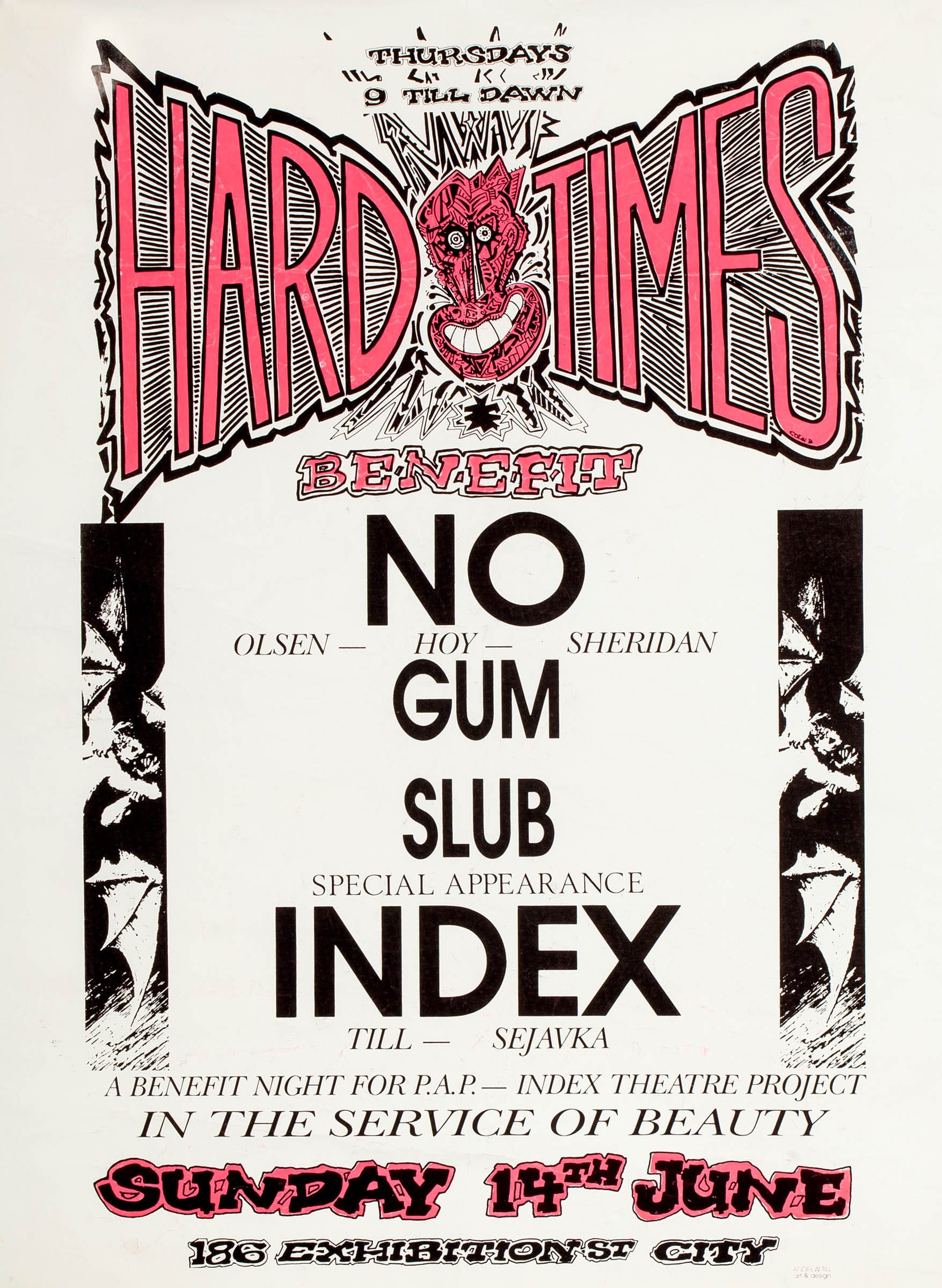 The short and very intense adventure of Andrew Curtis and Philip Samartzis as Gum is entirely contained in this revitalizing double CD that could turn many late-hour aficionados of turntablism to a bitter truth: yes, before the advent of installation messiahs and their auras of momentous looping majesty, two young lads from Australia ruffled some feathers with dangerous attitude, amassing rotting corpses of disco desperation, noises of skipping/hiccuping chanteurs, miscellanea of classical piano concerts and war bulletins, hotline beauties moaning in funky monstrosities – and much more. The development of an aesthetic seemed to be the last thought crossing Andrew and Philip’s mind; yet, their puzzling blueprint of record noise-cum-frenzied phasing superimpositions not only came well earlier than any equal artistic personality but also gave lo-fi minimalism that much needed kick in the ass, liberating the genre from the quagmire of dumb ‘industrial’ insignificance and projecting it to a future which – at that time – was certainly not predictable. Now, I can look at my 1987 original copy of Vinyl and be proud. 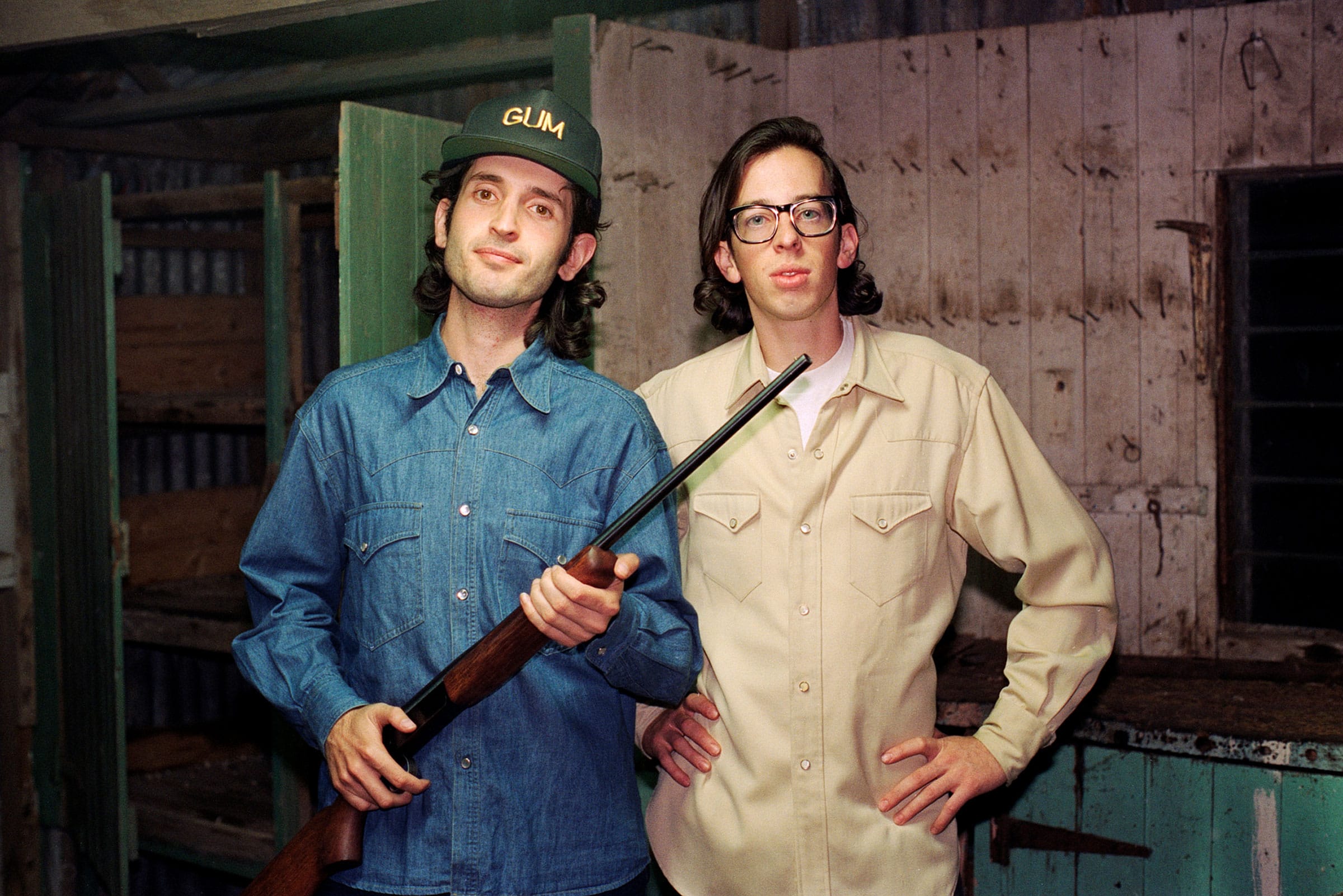 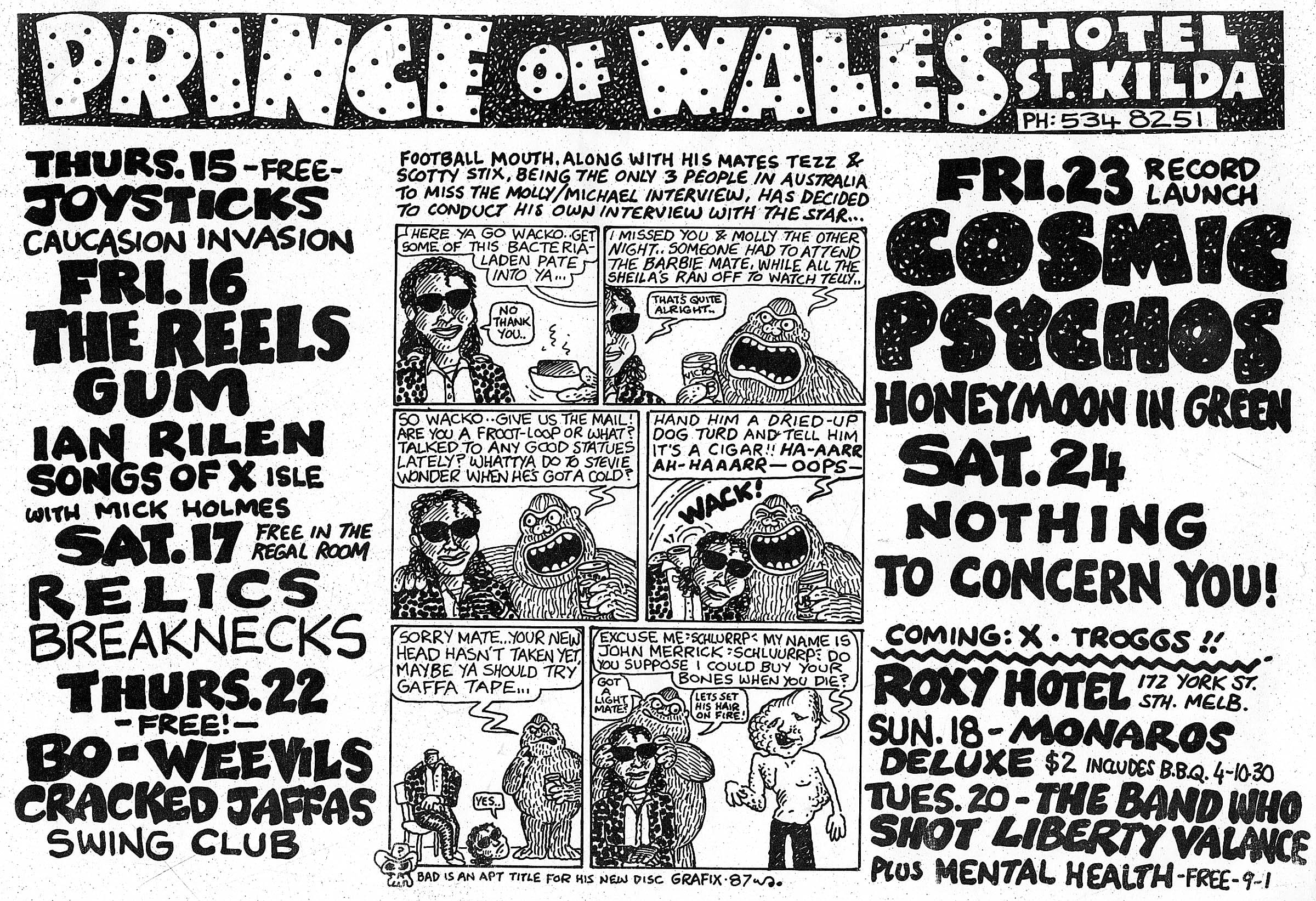 Handbill for gig with the late great Ian Rilen of X, 1987 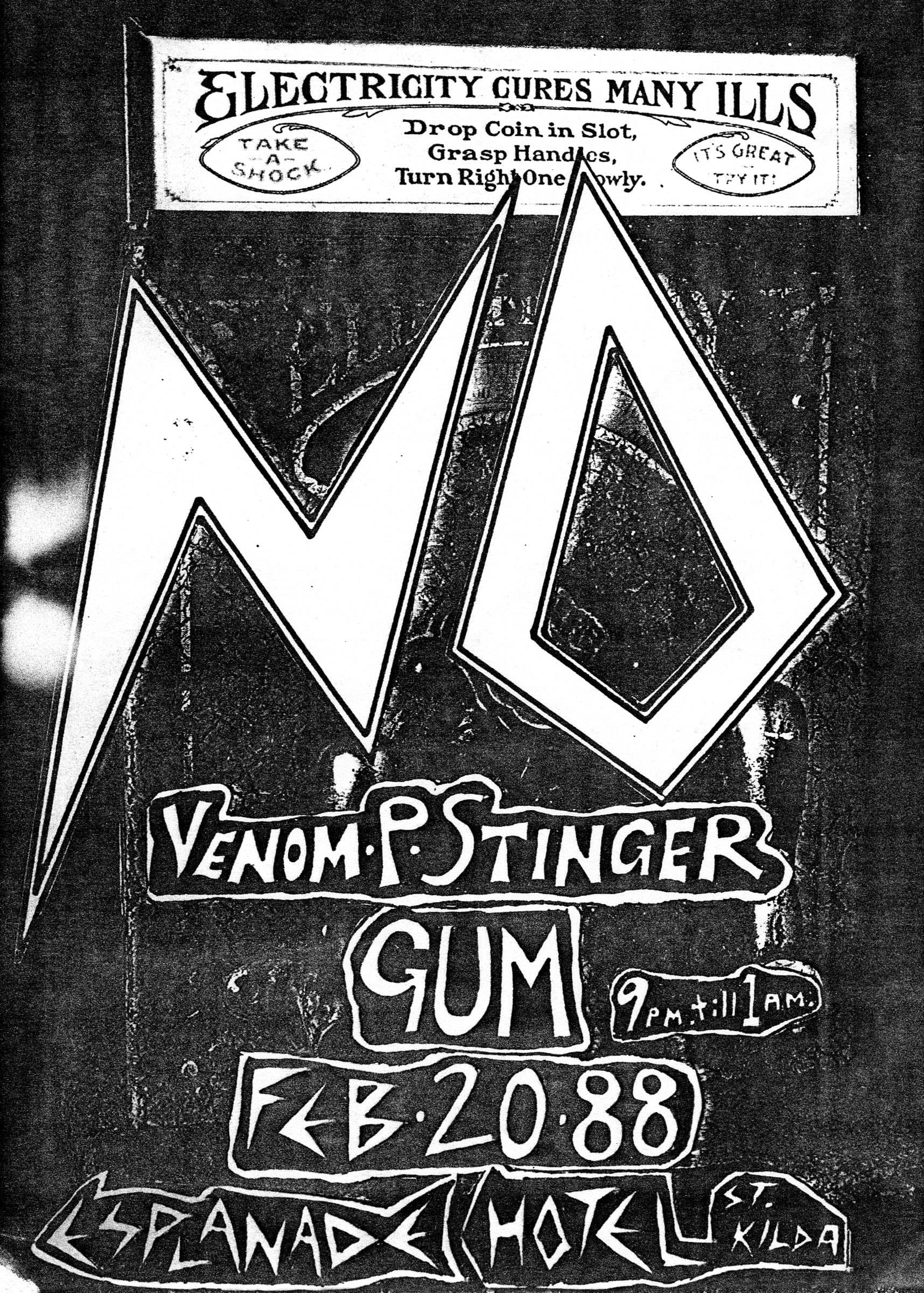 1980s Australia seems to have been a hotbed of visionary DIY experimentation in addition to spawning the familiar Antipodean Gothic of The Moodists, Crime & The City Solution, etc. With their fondness for bizarre tape loops, analogue abuse and wild video work, Tom Ellard’s Severed Heads had an international impact, their early work connecting with the Industrial scene of Cabaret Voltaire and SPK, and the blossoming lo-fi experimental movement of Nurse With Wound et al. Though Gum didn’t make any such splash at the time, this compilation shows their contemporaneous work to be similarly interesting and innovative.

The collection consists of their two albums (1987’s Vinyl and the following year’s 20 Years In Blue Movies And Yet To Fake An Orgasm) along with EP tracks and unreleased material. Settling on stuck vinyl as their main sound source, their work echoing that of Christian Marclay and prefiguring that of Philip Jeck, Gum sound remarkably contemporary. The outtakes are particularly good. The porno montage ‘1-800-GUM’ sidesteps puerility by the deftness of its musical logic. ‘TV Eye’, a blistering turntable demolition of The Stooges, explores similar territory to that later mapped so thoroughly by Otomo Yoshihide. Best of all is the romp through Throbbing Gristle’s ‘Blood On The Floor’ featured on 20 Years, a version so blunt and ragged that you’ll be spitting out teeth for hours afterwards.

Juvenilia though this collection may be (Gum’s Philip Samartzis and Andrew Curtis have gone on to produce interesting work in sound art and photography respectively), there’s enough music here to engage on its own terms rather than for the conceptual implications of the process. Gum never subscribed to the banal thematic grotesquerie that was the Industrialists’ stock in trade but were inspired by the scene’s sonic adventurism and hands-on punky attitude. It’s this excitement with the tactile nature of sound that radiates so strongly through this hugely entertaining document.

I found a copy of Gum’s 20 Years In Blue Movies and Yet To Fake An Orgasm amidst stacks at Forced Exposure during the first year I worked there (this would have been… 1997) and didn’t think much of it other than it was most likely some troubled post trumans water upstate new york solo bedroom noise attempt, albeit one with a terrible title. A few years later I was browsing in twisted village and I came across said record again, only this time it had a note attached to the cover saying something about ‘experimental turntable music’ and I picked it up…

Well, I’ve listened to that damn record maybe 30 times since then… it’s beome something of a staple of my DJ bag, as it works well in most settings from clearing out the bar after last-call to providing an excuse for society ladies to come up to me during art-gallery DJ sets and enquire if I’d heard of Christian Marclay (”yes maam… but this is actually a duo of teenagers from Australia from 1988″). It goes without saying that Mr Samartzis and Mr Curtis were muons ahead of the current curve of (*gulp*) post-media operators. Let’s hope this seals their fate…

Tracks above from Vinyl Anthology