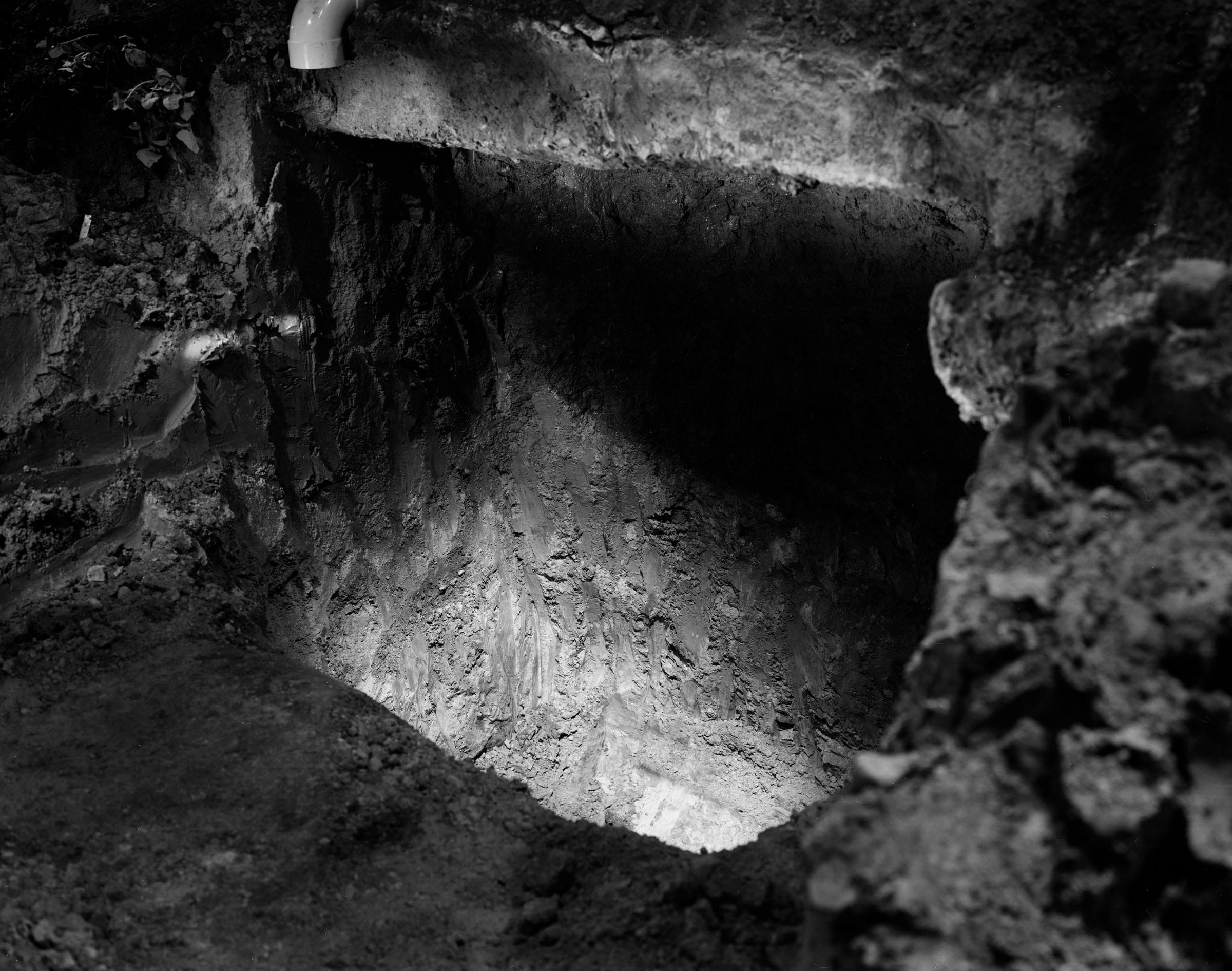 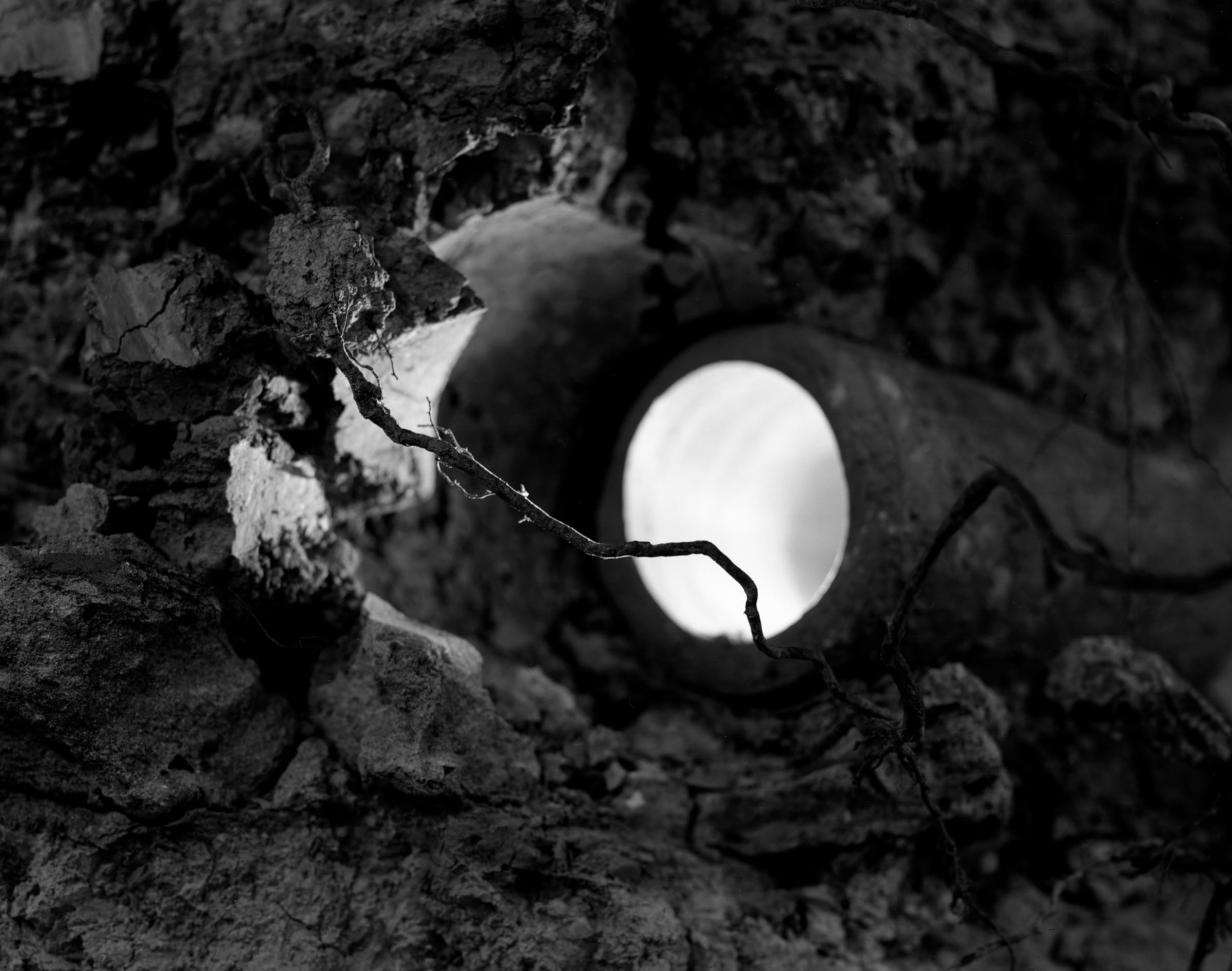 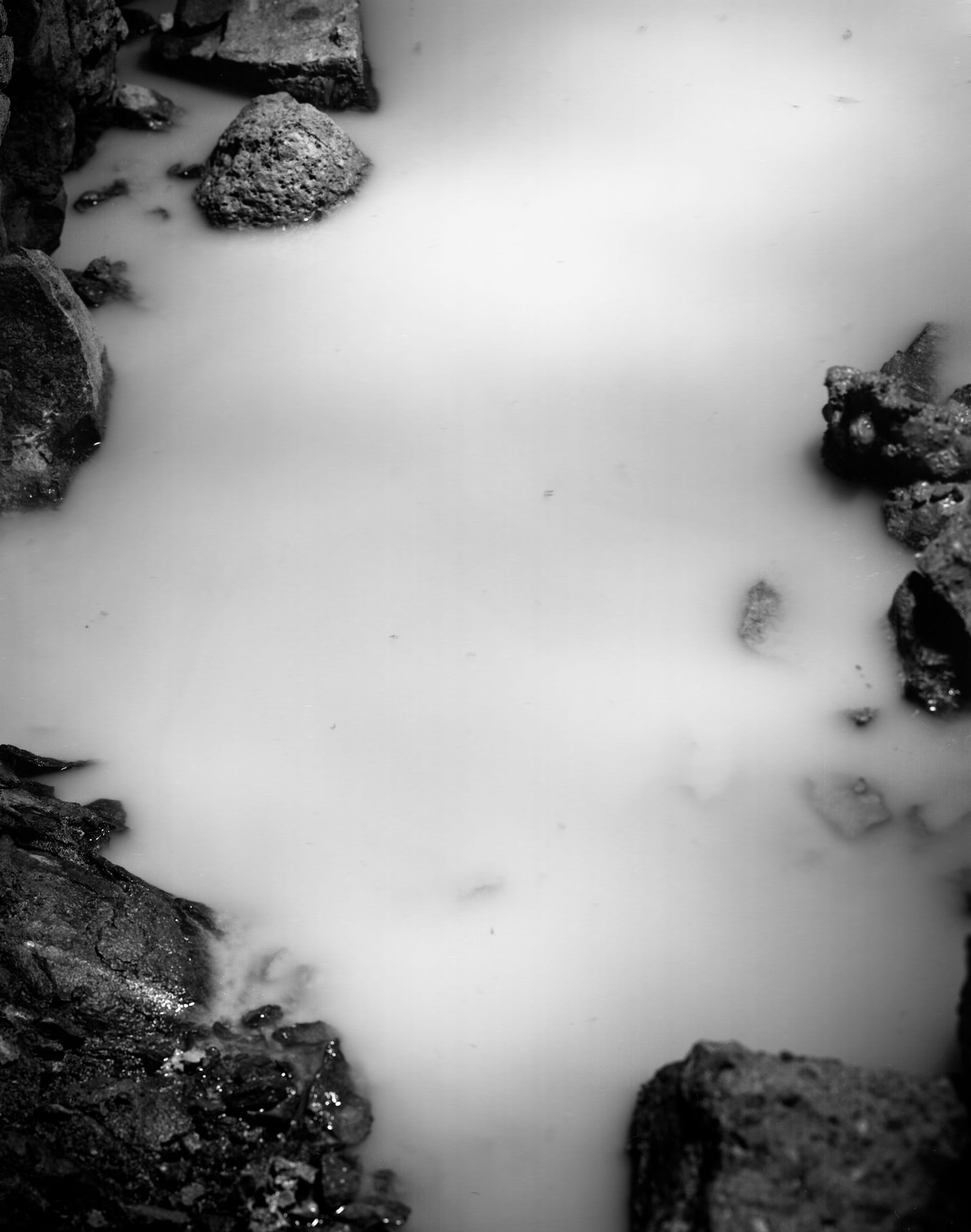 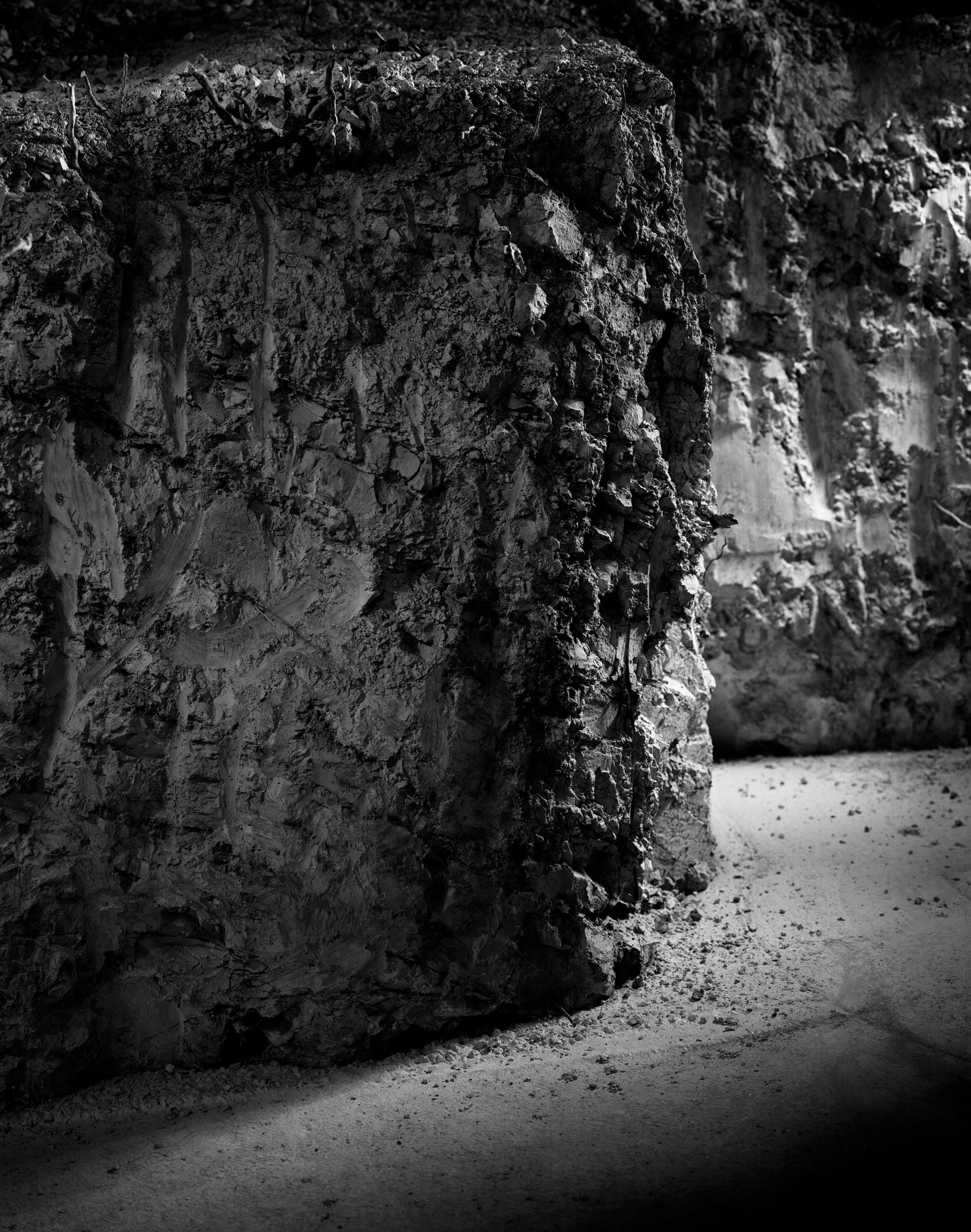 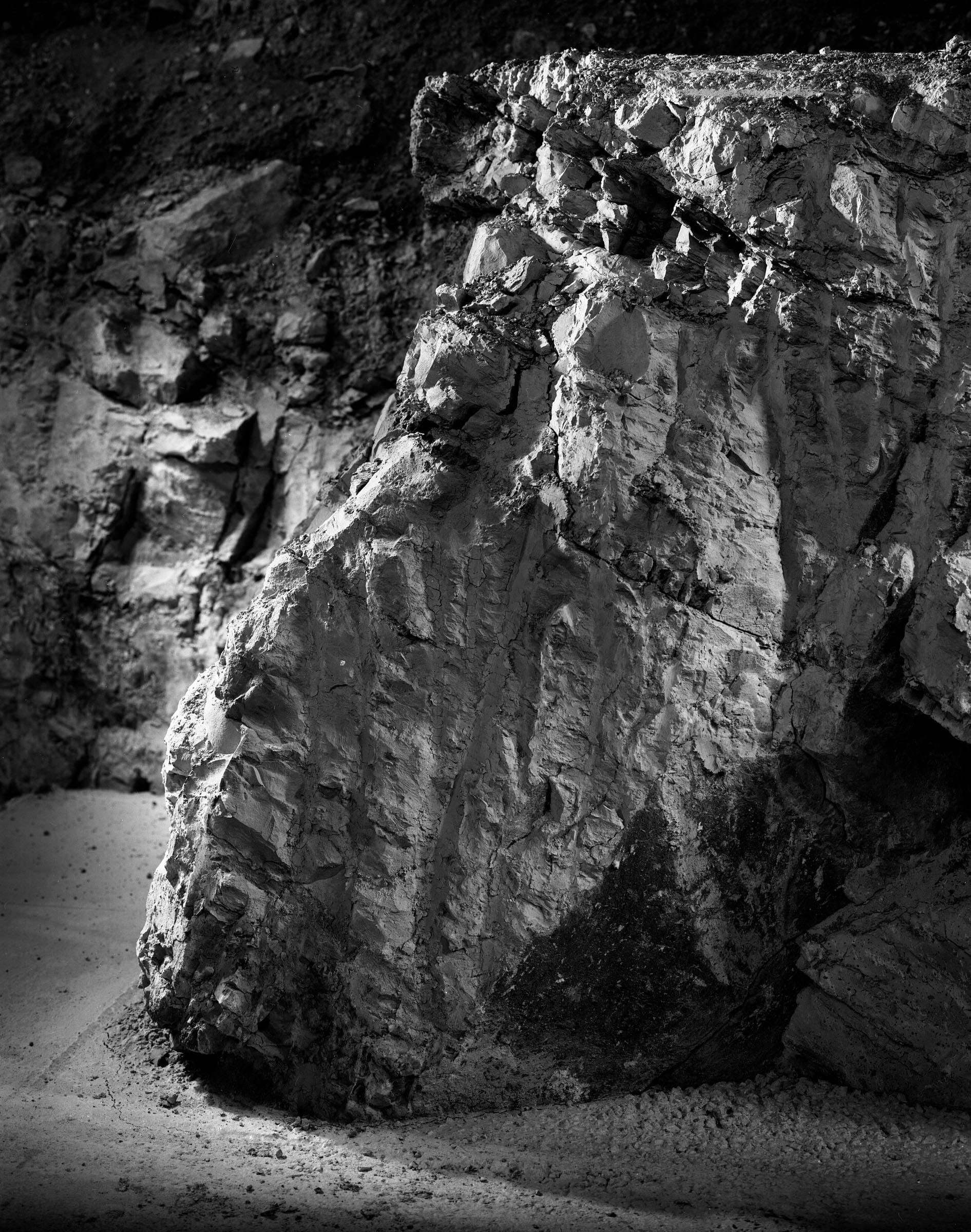 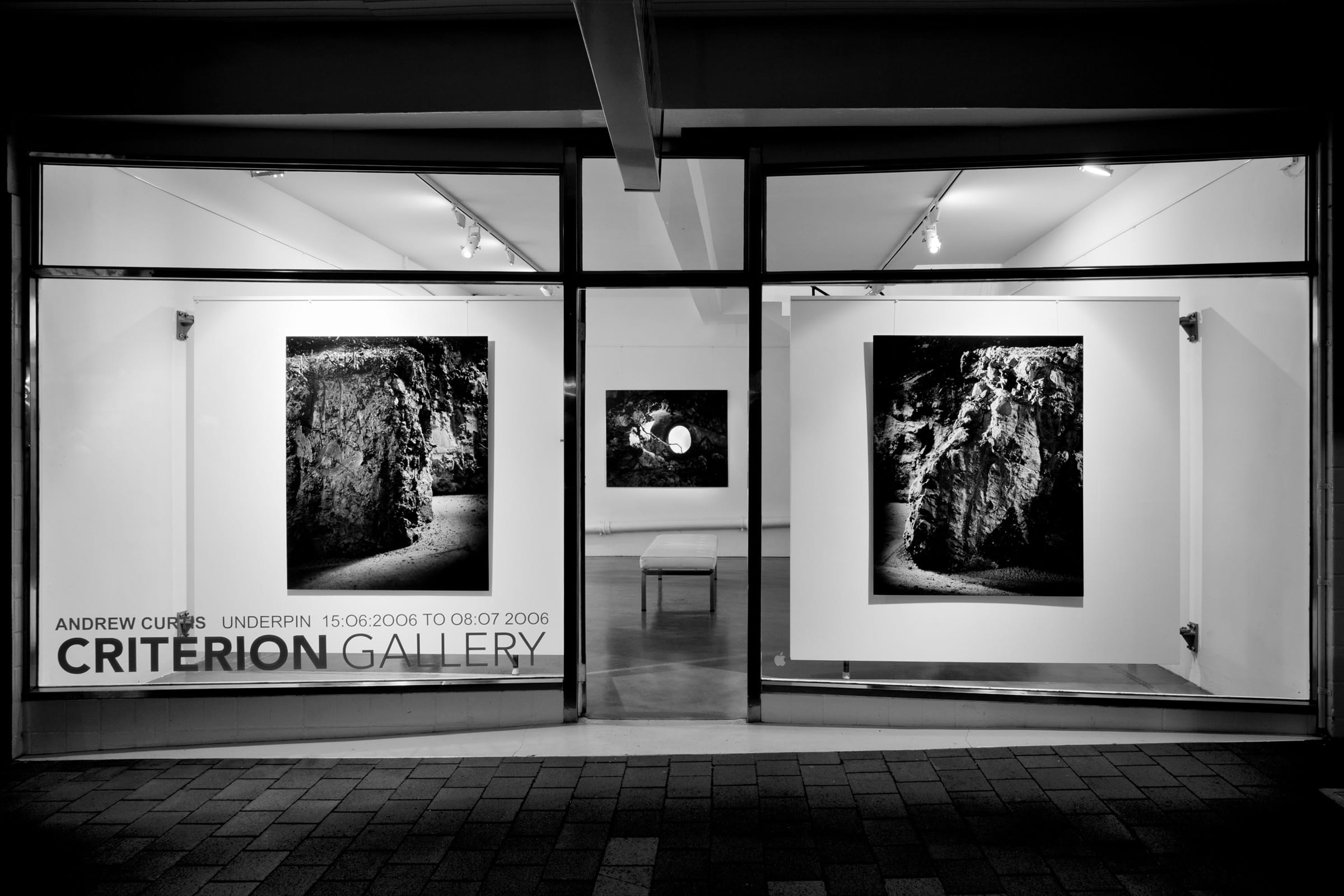 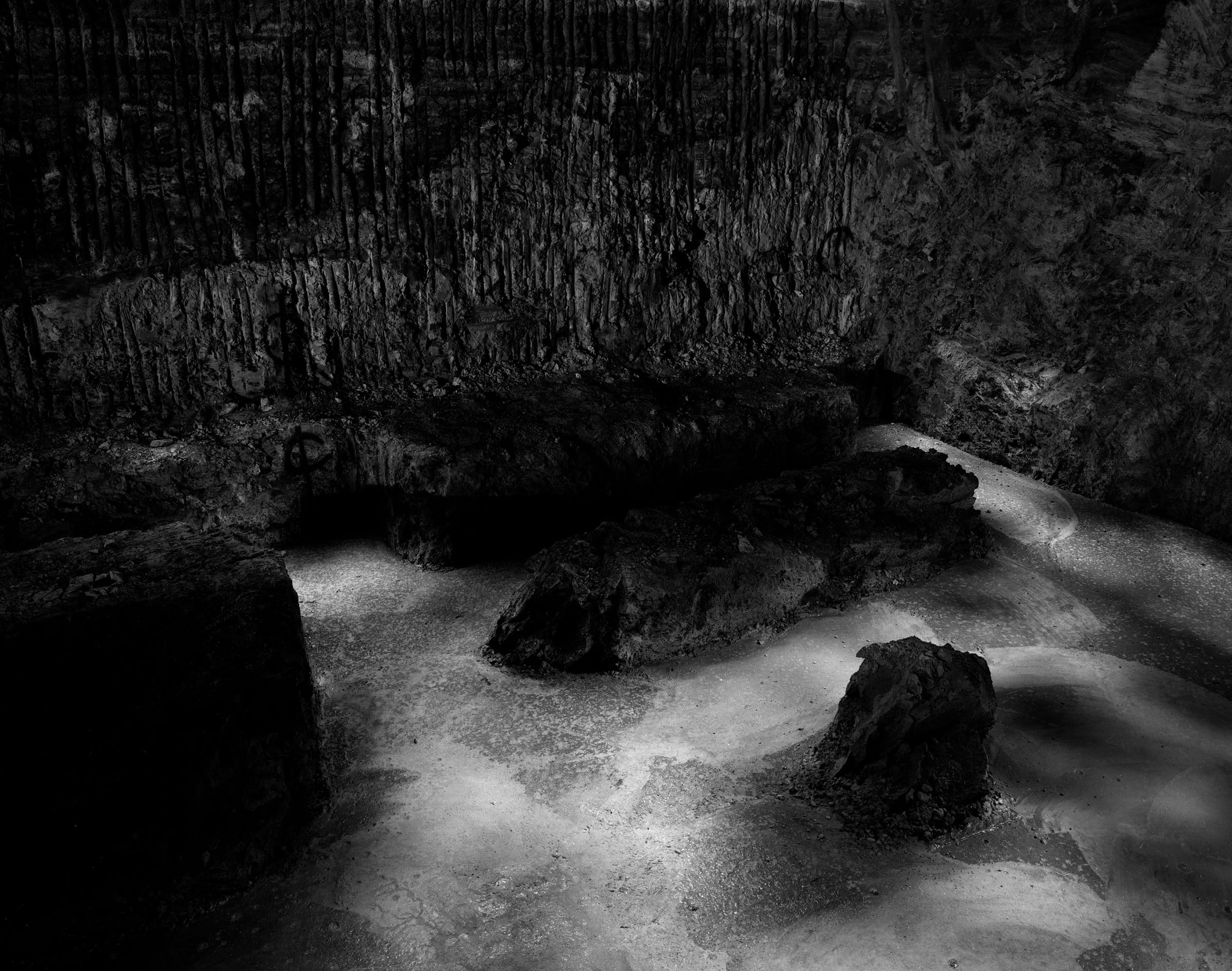 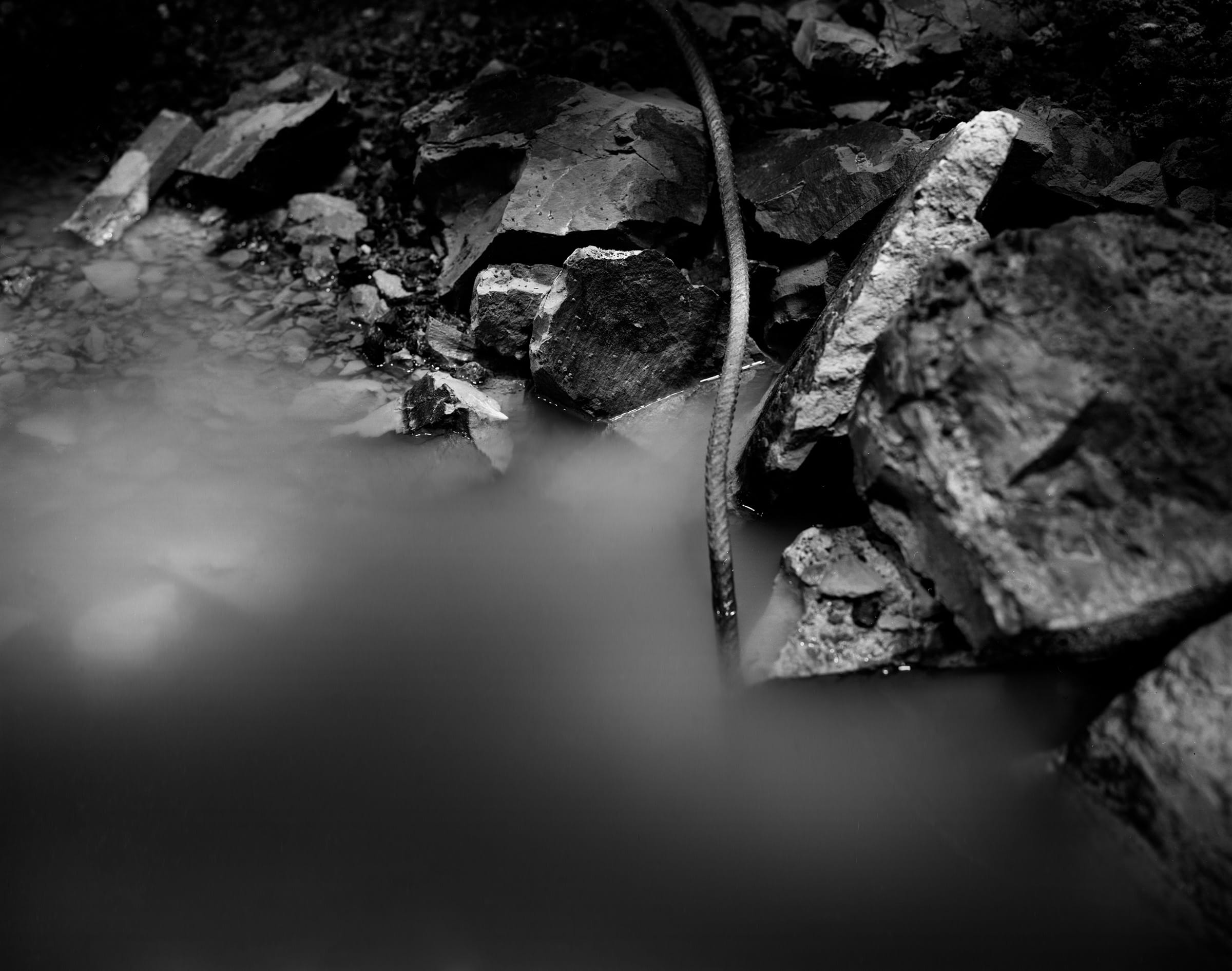 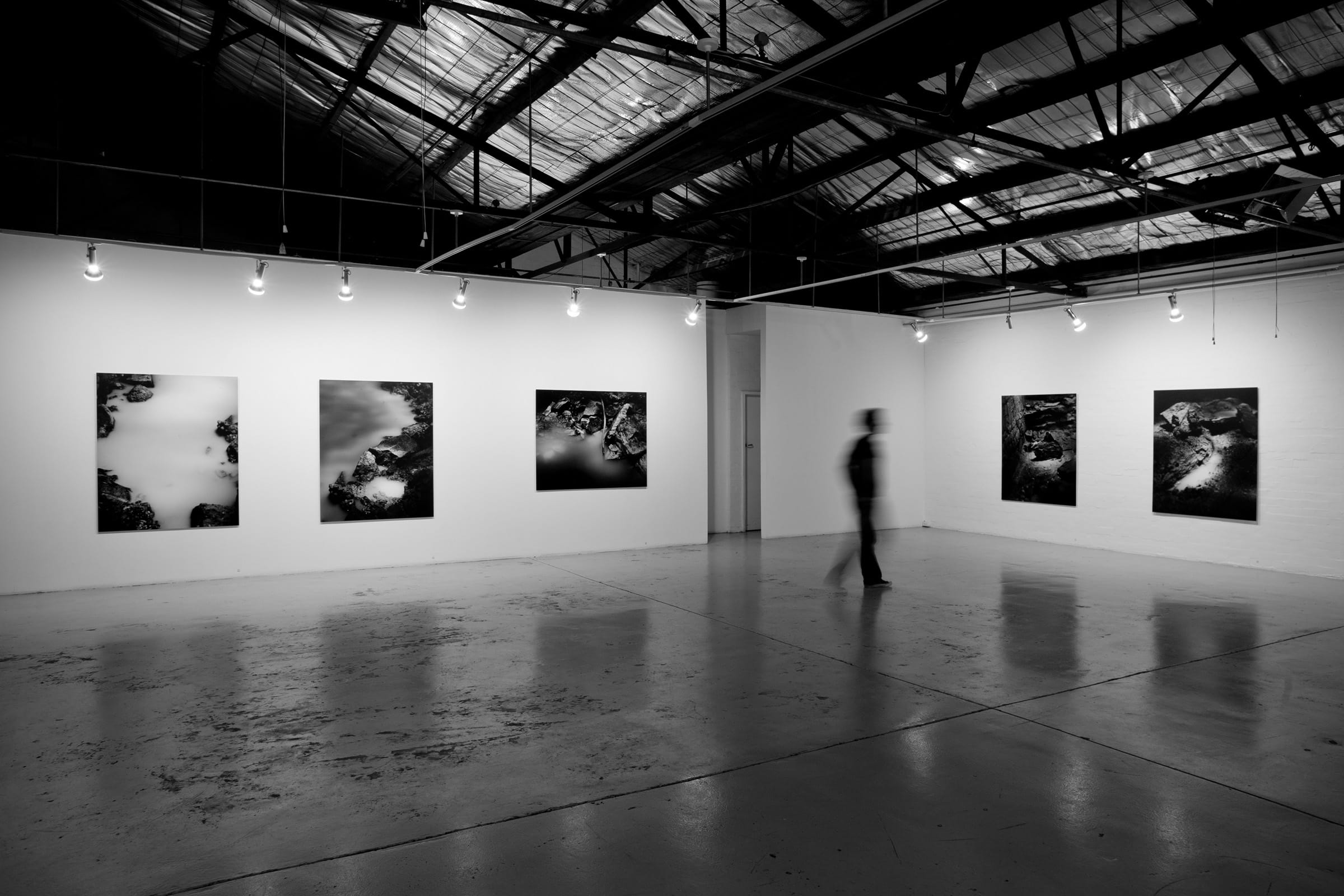 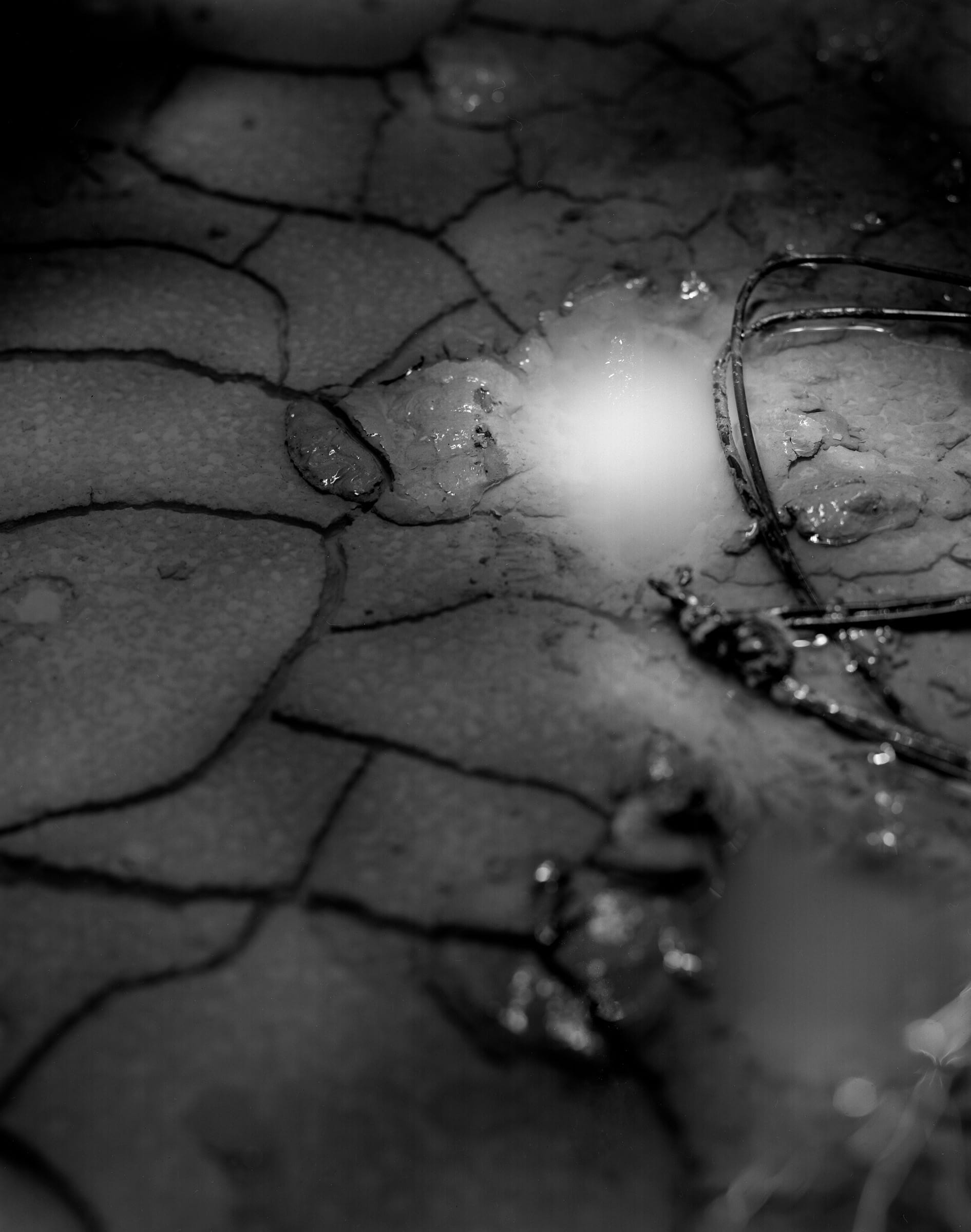 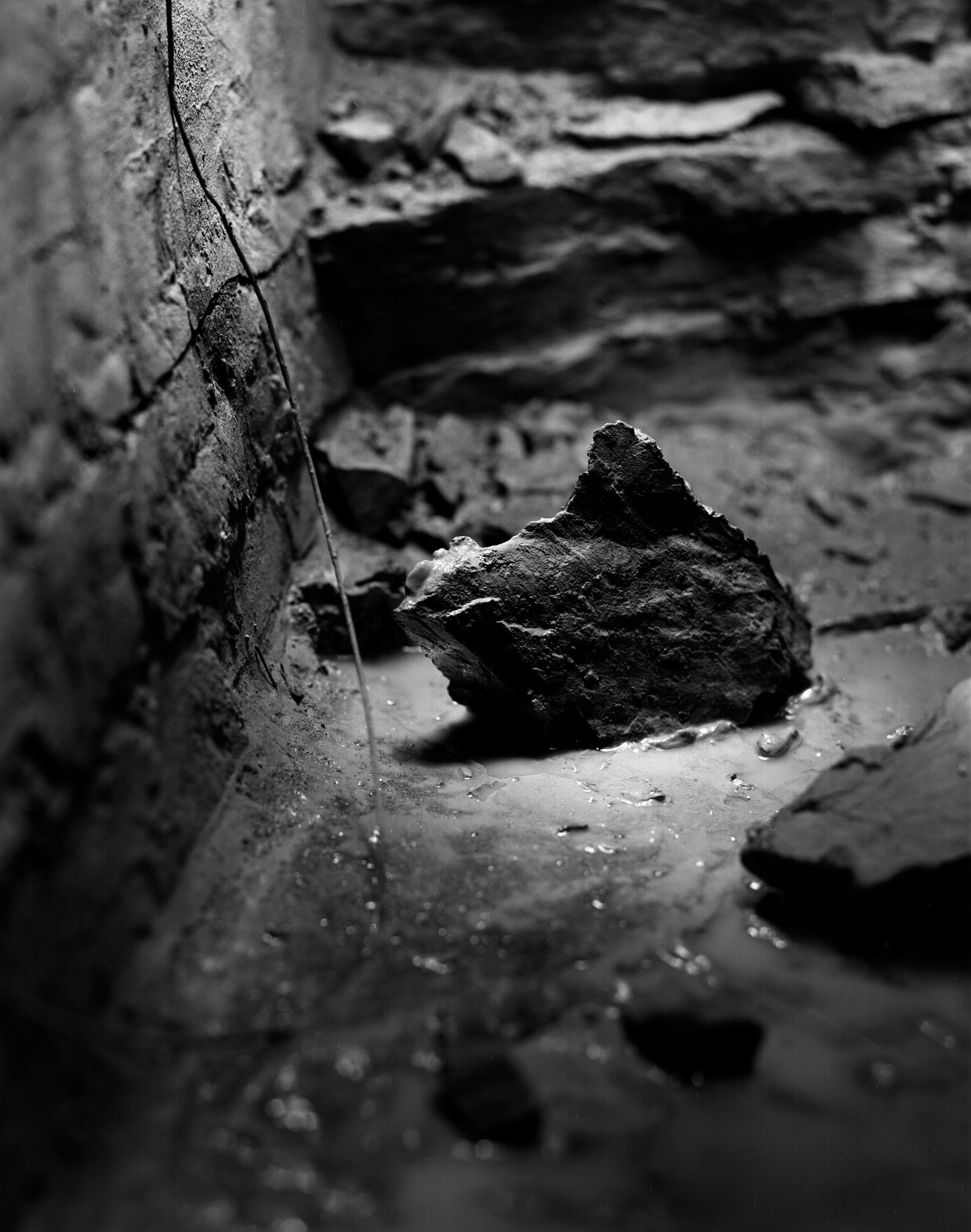 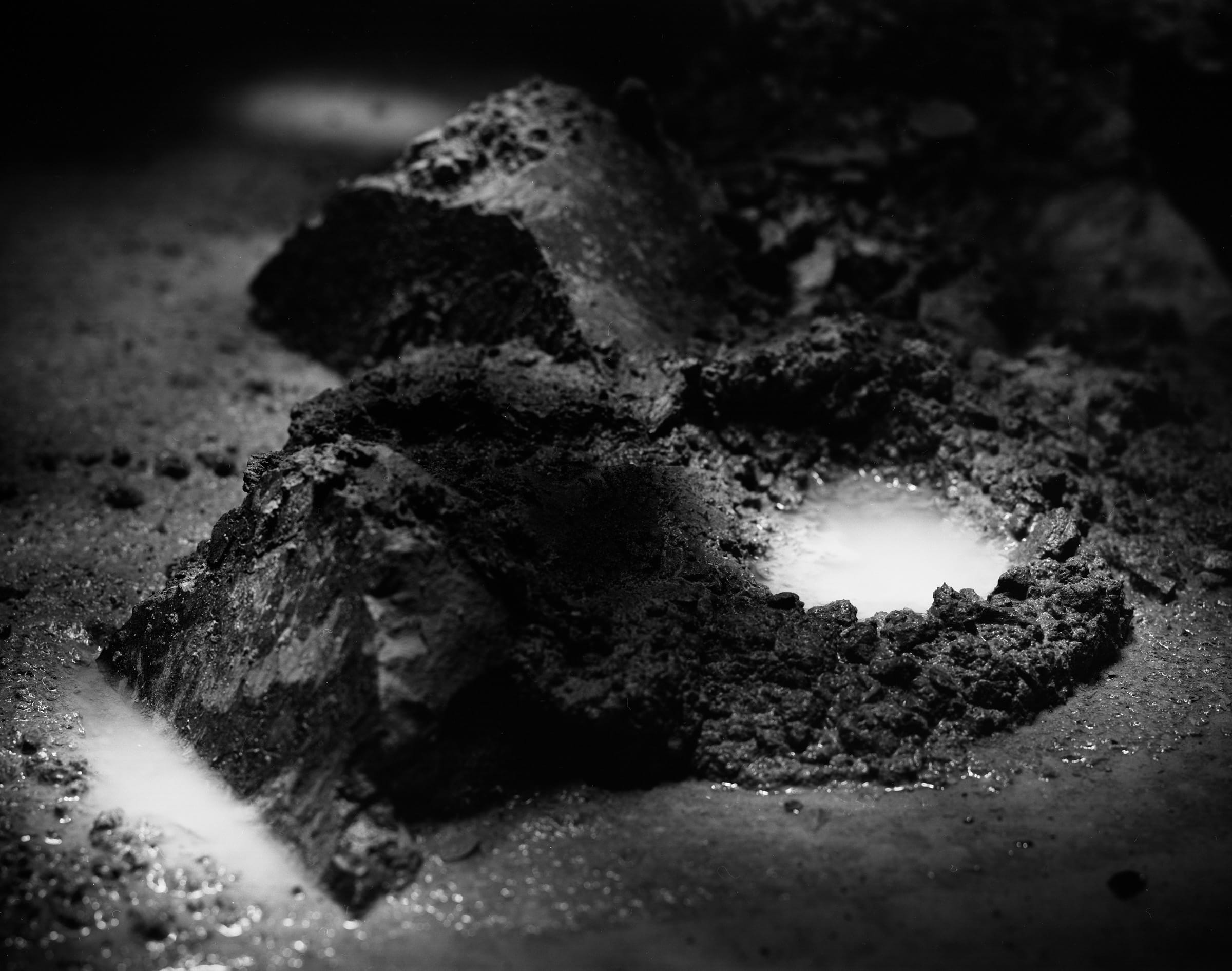 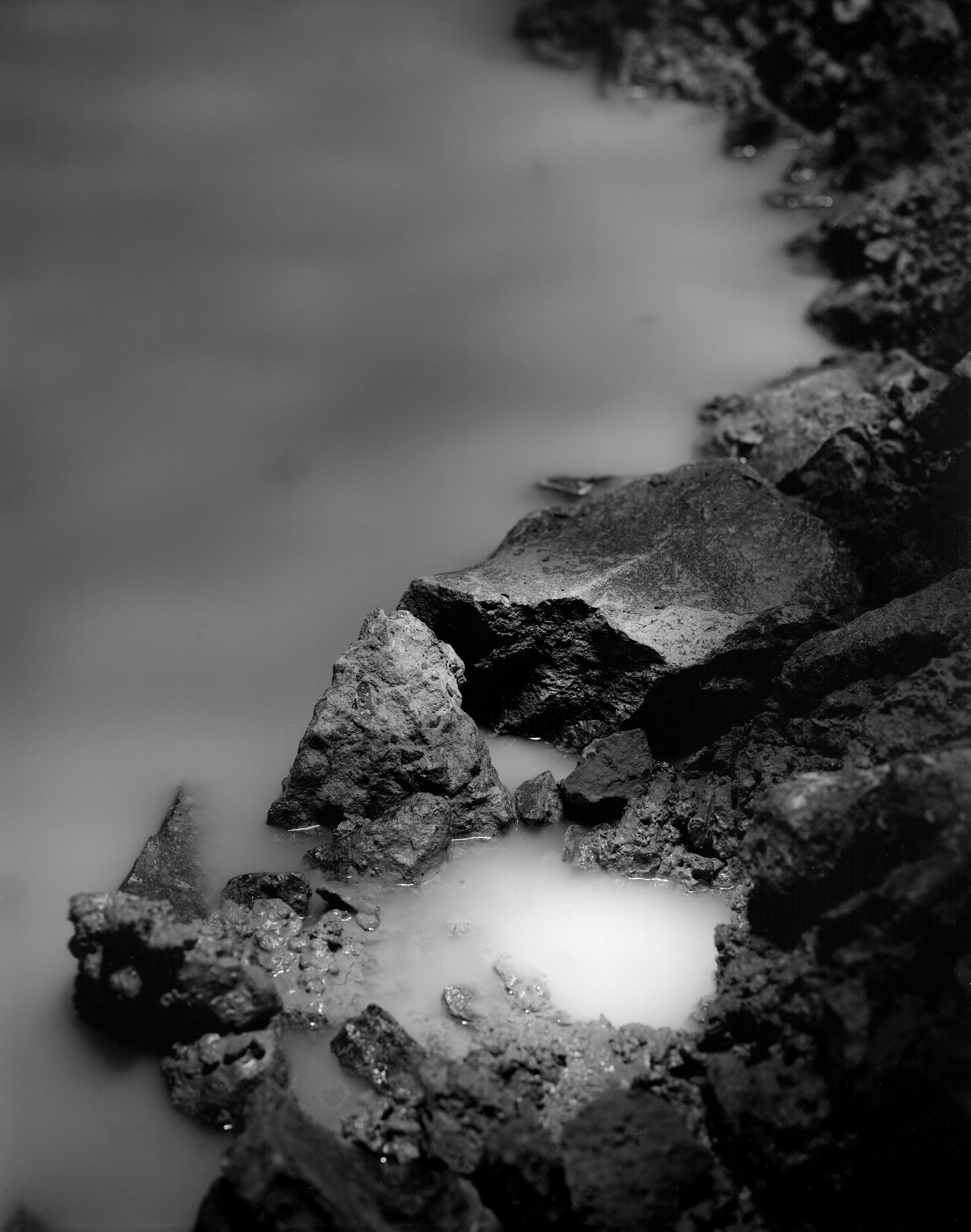 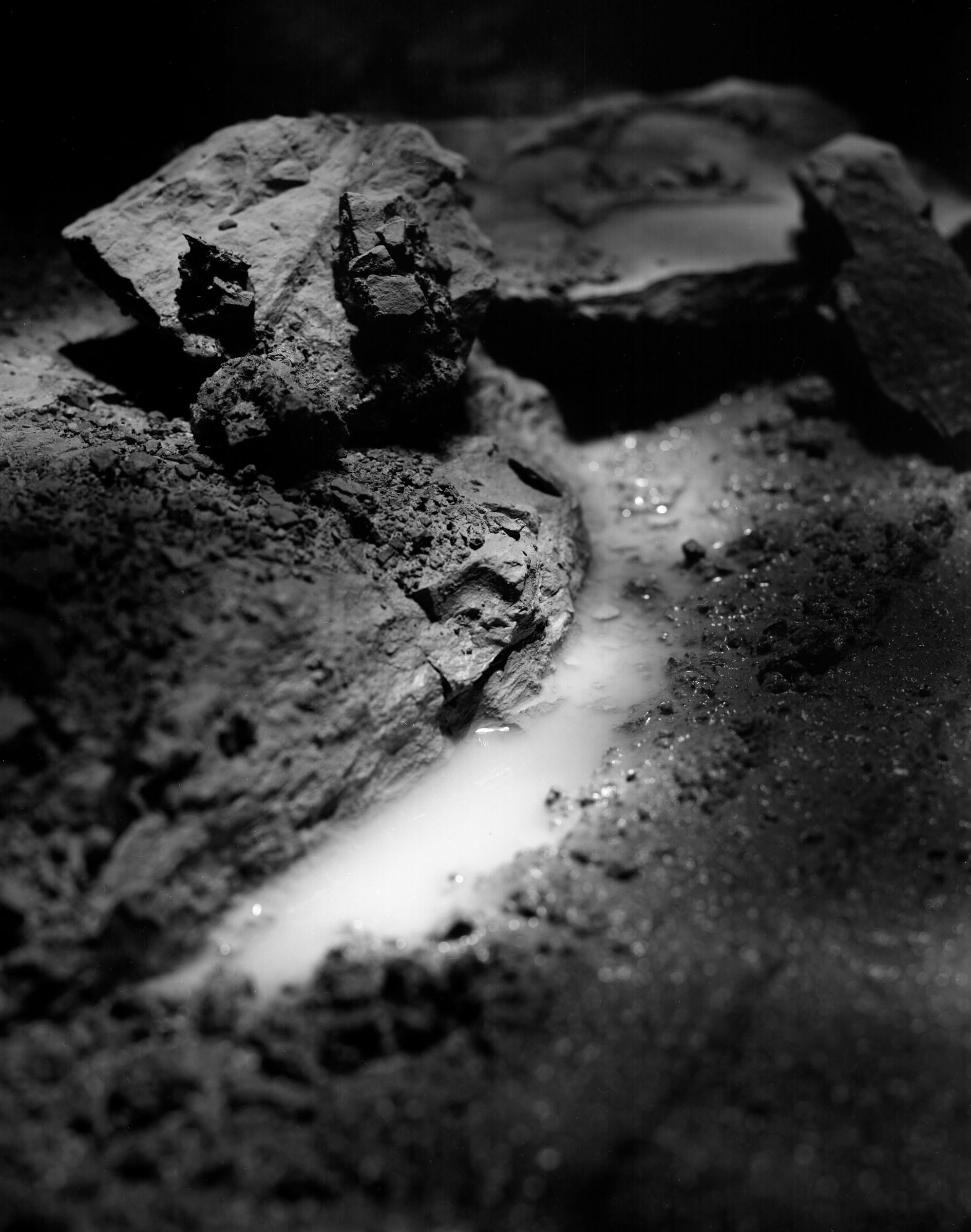 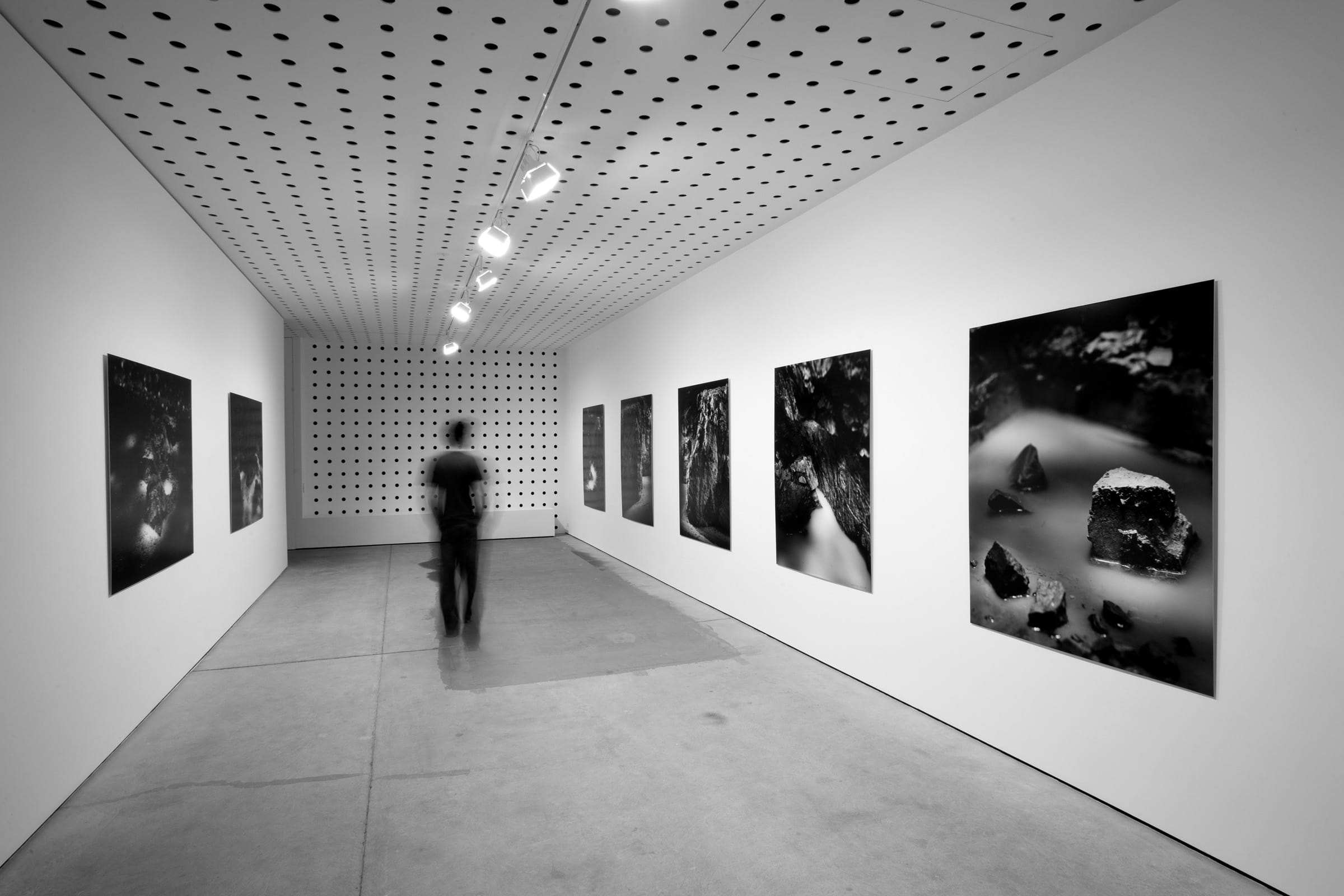 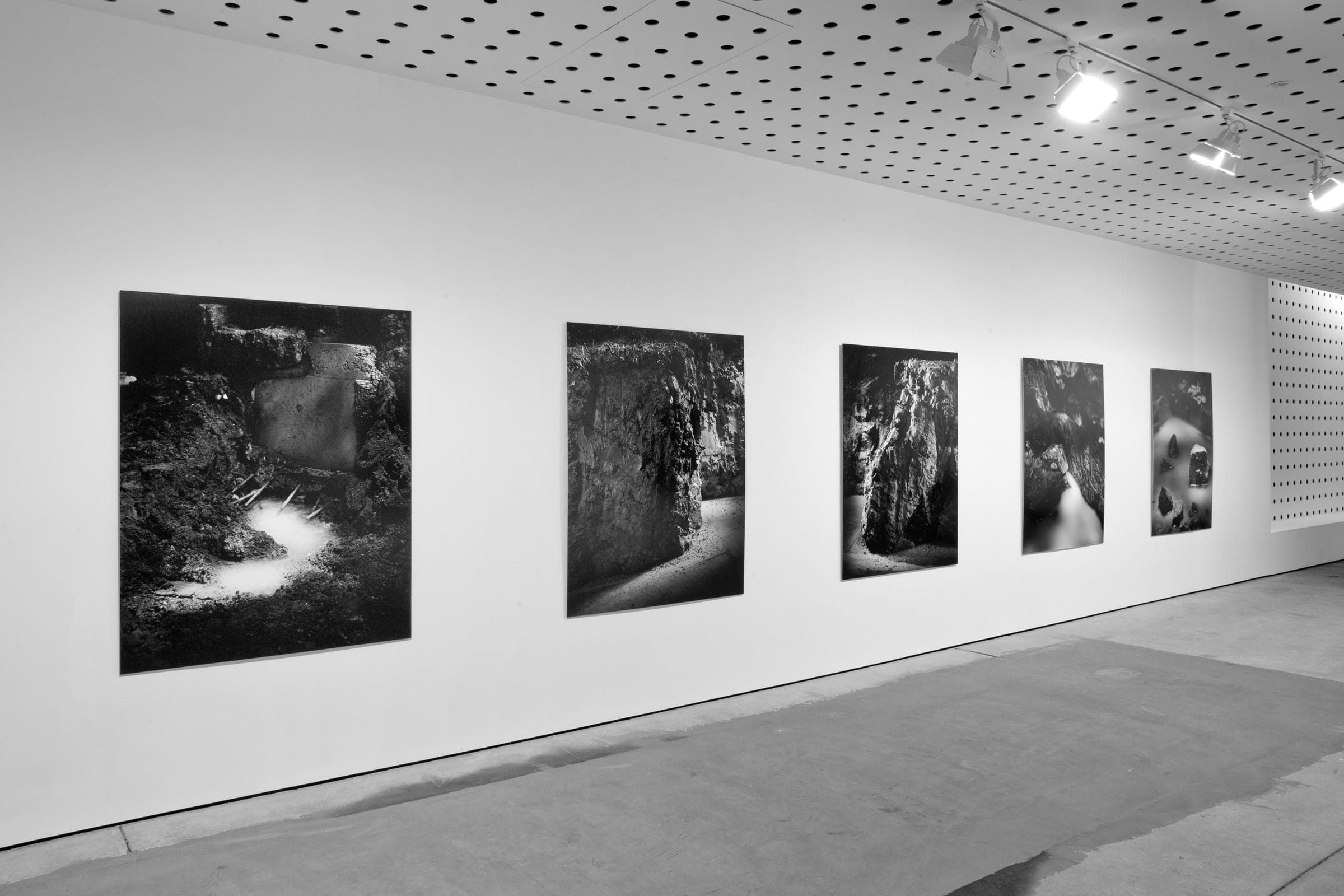 In the opening scene of David Lynch’s 1986 film Blue Velvet, a suburban dad hosing the garden one sunny morning suddenly has a stroke and collapses to the ground. The atmosphere darkens as we descend to the grass, then further, down into the soil. There in the darkness we soon make out the hideous spectacle of insects buzzing and clambering over each other, a black alien world only just below the surface.

In his new exhibition Underpin, Andrew Curtis also reveals an underworld seemingly just below street level: strange caverns of rubble and poisonous water. Working at night amidst the temporary disarray of building sites, he photographs all the usual material of construction, the concrete footings, reinforcing wire and plumbing pipes. But instead of a constructive vision, he sees only ruin, the earth gouged and scraped, the surface all waste and debris. Though they are foundations, with all that word’s connotations of strength and permanence, Curtis depicts them as scenes of decay and regression; mysterious, sunless landscapes without nature.

This dark vision contrasts with the hopeful future of the building sites. While Curtis is clearly not working in the genre of architectural photography, he is photographing the foundations for multistorey apartments and offices. These spring from a rationalist culture of engineering and technology, founded on “the belief that an all-encompassing design can order meaning through the logical placing of people and things within a grid-like system.” This is the subject of much architectural photography, focussing on the pristine beauty of modern design. The aspirational consumer magazines show interiors styled in elegant minimalism, a white world, cool, sleek and calm. But Curtis shows only mess. At night, under cover of darkness, he reveals its irrational side, a chaos of mud and rock. And he does this by literally shining a light on it.

Underpin is a continuation of Curtis’ previous project Slab, though in a much darker vein. That  was also shot on construction sites at night, but focussed on the giant concrete slabs of prefab architecture. Slab was dark in mood but it had fun with the monolithic shapes (he made references to 2001: a Space Odyssey) and one could sense the photographer’s admiration for the strong geometric forms, even when he shot them in the darkest tones, sometimes hinting at strange rituals.

The new work is a descent from that. The gaze is now directed downward and the subject is at ground level or below. It is a descent in mood and in the psychology behind the work. The ditches, tunnels and waste signify an anal vision, dark, barren and hidden; the airless claustrophobic caverns somehow pagan. Underpin is like an excavation into the sub-conscious mind, the Freudian id, with its primal motives, eros and, especially here, thanatos – the death-drive. The disordered scenes in these images are uncanny. In the famous essay of that name by Freud, the word is a translation of the German unheimlich, meaning unfamiliar, strange and sinister, literally unhomelike. Writing in terms that applied to much of the Surrealist art that was soon to follow, he described an author creating “a kind of uncertainty in us by not letting us know, no doubt purposely, whether he is taking us into the real world or into a purely fantastic one of his own creation.”

This is the natural terrain of photography, anchored as it is in optical reality but always ready to create ambiguity and mis-information. And Curtis, working in a surrealist mode, creates a world of his own invention, making the everyday unfamiliar, removing the distinction between imagination and reality. Redan Street 3 is really just a hole in the ground, probably ready for some concrete footing. But in the photograph, with its unearthly light coming from below, it seems like a glimpse into a threatening underworld. And Toorak Road 5, in reality a bed of rock in recently poured concrete, now looks like a coffin discovered in some secret catacomb.

These transformations are achieved largely through lighting, and over several years Curtis has developed a distinctive approach. Using various sizes of handheld torch (he once used a kangaroo shooter’s light!) he is able to pick out details freely, moving the lamp during exposure. Working in darkness he has the photographic equivalent of a blank canvas, though in charcoal black, with his lamps painting in the lighter tones. The result has no equivalent in nature, the eerie artificial glow like something from a dream, or a film. It is all artifice. The setups are intricate and difficult to photograph, the building sites turned into giant still-lifes.

He uses a large format camera, the negatives printed onto fibre-based paper, then selenium toned to intensify the blacks. This is a traditional approach, a connection to the honoured traditions of photography, especially that of architecture and industry. However, the admiring upward gaze so typical of those genres is absent here. Curtis concentrates on the detail rather than the whole, reducing our gaze down to fragments of a scene, small areas of mud and rock. The compositions are oblique, skewed, almost a denial of the normal etiquette of good photographic composition.  Some have only a few centimetres of sharpness, the rest fading off into blur and shadow.

The photographs in Underpin are not documentations of a real place but an interior landscape outside of time, the projection of a personal territory of the mind. The subject is the underpinnings of large architectural structures; they will become, or probably are by now, useful, functioning buildings, part of the ordinary social world of commerce or domesticity. Curtis shows they are not on solid foundations. 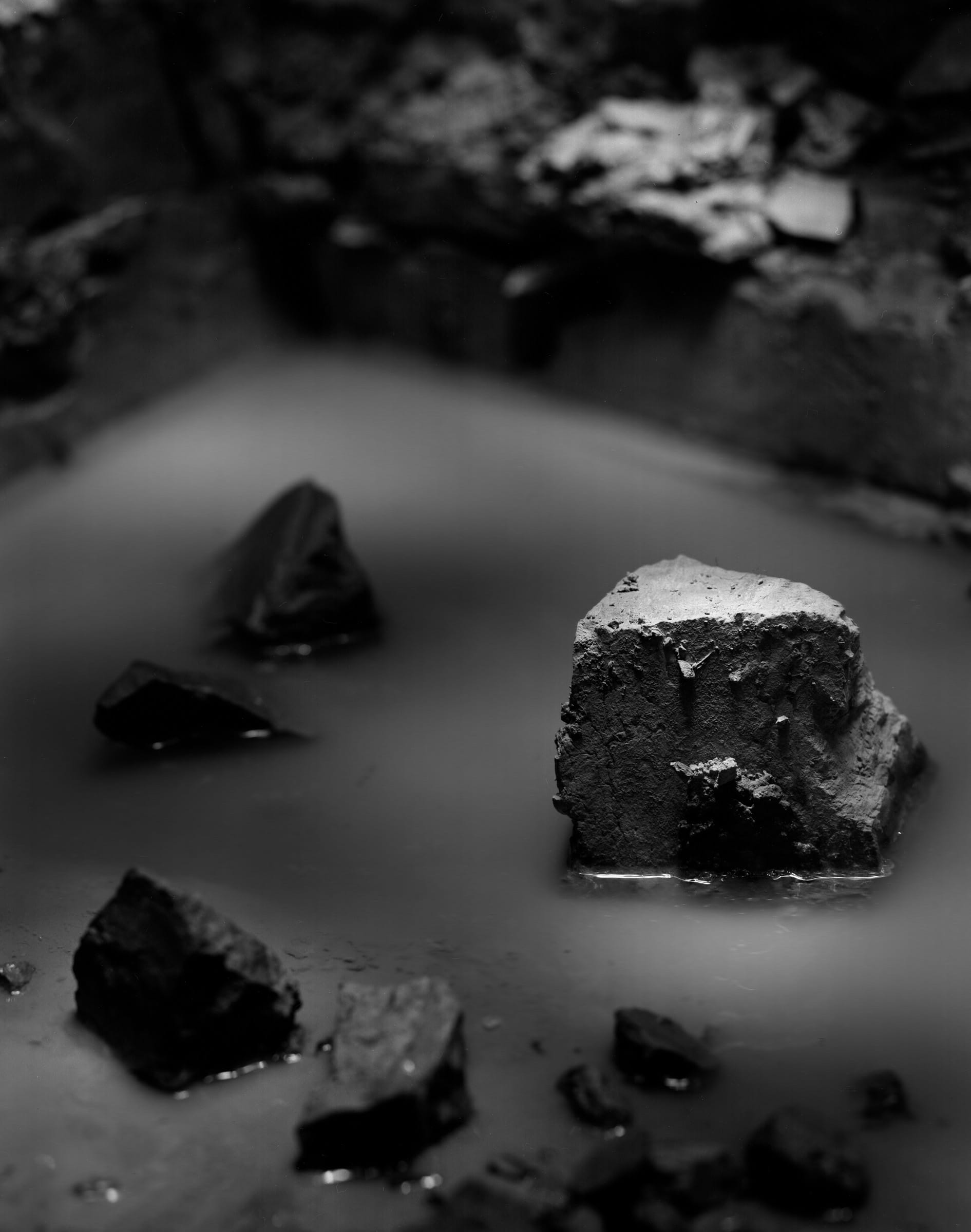